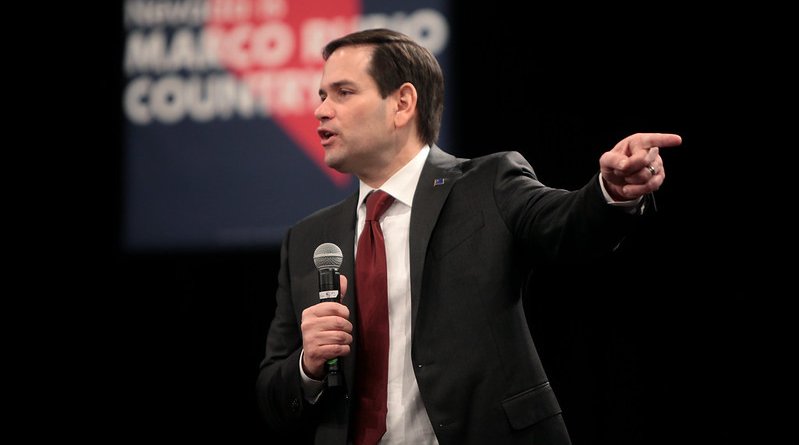 Americans are searching for answers for the disintegration of the family, falling participation in religious and civic institutions, drug dependency, suicide, and economic dislocation.  Sen. Marco Rubio, R-Fla., believes he has found the answer to the social crises of our time in Catholic social teaching. He describes his own reading of Catholic social teaching as “Common-Good Capitalism,” drawing principally on Pope Leo XIII’s encyclical Rerum Novarum emphasizing both the need to focus on the common good of all citizens and the intrinsic dignity of work that each contributes to our communities.

Sen. Rubio’s interest in Catholic social teaching should be applauded as any thinking through of our social and economic problems should be grounded in authentic teaching about the human person and the market economy. Too often our politicians’ approach to social problems is simply reactive to current crises, failing to discern both the rights and responsibilities of persons and the role of both formal and informal institutions in shaping our life together.

Often hyphenated capitalisms obscure more than make clear but there is a case for making such distinctions in Catholic social teaching itself. In Centesimus Annus Pope St. John Paul II makes just such a distinction. He expresses approval for “capitalism” meant as “an economic system which recognizes the fundamental and positive role of business, the market, private property and the resulting responsibility for the means of production, as well as free human creativity in the economic sector,” while he frowns on “capitalism” that denotes “a system in which freedom in the economic sector is not circumscribed within a strong juridical framework which places it at the service of human freedom in its totality, and which sees it as a particular aspect of that freedom, the core of which is ethical and religious.”

Authentic capitalism grows out of an understanding of the human person in a social and political context ordered to the flourishing of human persons. It never stands alone but alongside other elements of a healthy social order.

Sen. Rubio’s economic analysis is, however, flawed. Writing for Law & Liberty, James R. Rogers compares Rubio’s project to that of the late German economist Wilhelm Röpke while pointing out that in its embrace of the mistaken approach of contemporary post/anti-liberal Catholics:

This criticism, Rogers argues, is “myopic in the extreme”:

That financial markets trade existing securities far more than raising capital for new projects is certainly true. But much of the demand for new securities derives from the ability to sell those securities to someone else when one needs money. What criticisms of “financialization” miss is the connection between willingness to fund new investments and the subsequent ability to trade those investments later on the secondary market.

Addressing our pressing social concerns requires both correct principles and accurate analysis because, as the old saying goes, “In theory, there is no difference between practice and theory. In practice, there is.” We need good intentions and sound economics.

Sen. Rubio is only beginning to lay out the broad outlines of the policy agenda of his Common-Good Capitalism but particular policy initiatives do not arise out of Catholic social teaching as Pope St. John Paul II makes clear:

The Church has no models to present; models that are real and truly effective can only arise within the framework of different historical situations, through the efforts of all those who responsibly confront concrete problems in all their social, economic, political and cultural aspects, as these interact with one another.

When Sen. Rubio calls for, “taxing stock buybacks and encouraging physical investment, building new hubs for manufacturing and innovation, and further expanding the federal per-child tax credit and enacting a paid family leave policy,” those policy proposals should not be identified with Catholic teaching itself.

Many of these policies fail to take account of our actual circumstances and sound economic analysis. Taxing stock buybacks would only hinder the physical investment Sen. Rubio seeks to stimulate. When a corporation engages in buybacks it simply transfers funds from itself to its shareholders. These shareholders in turn reinvest these funds in other businesses and investments. To the extent these funds are moved to more productive forms of investment they represent a salutary reallocation of resources within the economy not a withdrawal of investment from it. As the economist Tyler Cowan explains, “Share buybacks simply indicate that investors don’t think those particular companies are the most promising outlets for new investment.” Far from being merely an exercise in avarice John Cochrane, Senior Fellow at the Hoover Institution, points out that, “Buybacks do not automatically make shareholders wealthier.”

Proper thinking about the human person, society, and institutions, like that done in Catholic social teaching, is essential to addressing social problems. Marco Rubio’s policy proposals however need to be equally well grounded in a sound understanding of the economy and the effects of public policy upon it. In Mater et Magistra Pope St. John XXIII offers this encouragement:

Differences of opinion in the application of principles can sometimes arise even among sincere Catholics. When this happens, they should be careful not to lose their respect and esteem for each other. Instead, they should strive to find points of agreement for effective and suitable action, and not wear themselves out in interminable arguments, and, under pretext of the better or the best, omit to do the good that is possible and therefore obligatory.

Hopefully Sen. Rubio’s “Common Good Capitalism” represents not the end but the beginning of his reflection on the treasures of Catholic social teaching.

*About the author: Daniel J. Hugger is librarian and research associate at the Acton Institute for the Study of Religion & Liberty. He studied history at Hillsdale College and earned a State of Michigan teaching certificate at Calvin College, where he completed a thesis on the role of the imagination in the writings of St. Ignatius of Loyola. For his work in history at Calvin he was nominated for a Lilly Fellowship. He has taught history, English, and economics at public schools in the Grand Rapids area and has lectured on Lord Acton.