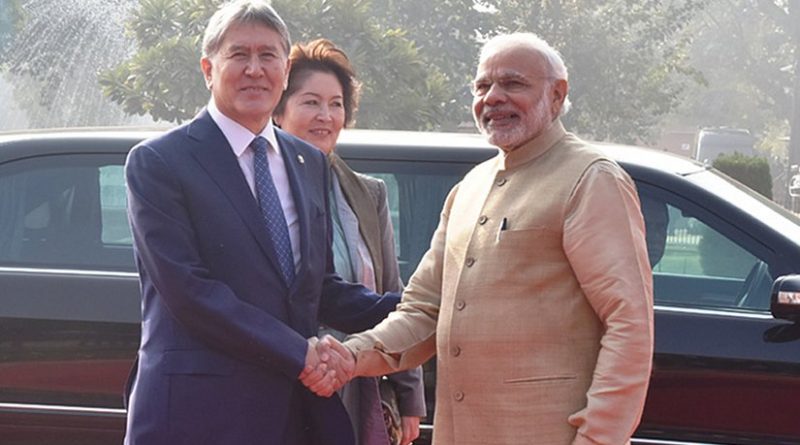 For the first in 13 years, the President of Kyrgyzstan made a visit to India this month. President Almazbek Atambayev paid a four-day State visit from 18 to 21. Atambayev had taken over as President in 2011 and his term expires on 1 December next year.

Kyrgyzstan is the only country in Central Asia to have witnessed a regime change through the Tulip Revolution in 2005 which saw the ouster of Akayev by Kurmanbek Bakiyev who himself was removed after a spate of violent protests in 2010. Roza Otunbayeva became the interim President. She was succeeded after elections by Atambayev in 2011.

From India also a long interregnum of twenty years occurred between the first visit to Kyrgyzstan by Prime Minister Narasimha Rao in 1995 to the second Prime Ministerial visit by Narendra Modi in July, 2015. Relations between India and Kyrgyz Socialist Soviet Republic during the Soviet period were vibrant and dynamic in continuation of the extensive cultural and historical ties between India and this region. The long gap of twenty years was however avoidable and should not have been allowed to occur.

Kyrgyzstan is located in a strategically and geo-politically important region which is crucial for the stability and security of India. Kyrgyzstan shares the Fergana valley with Uzbekistan and Tajikistan. The valley is house to several terrorist groups like Islamic Movement of Uzbekistan (IMU), Hizb-ut-Tahtir (HuT) and others which can cause instability. They are prone to increasingly indulge in violent acts if Taliban expands its presence from beyond the borders of Afghanistan. Islamic State has also been making forays into the region. This has further enhanced risks and danger to stability and security of Kyrgyzstan and other countries of Central Asia.

Radicalisation of youth has become a serious problem in the country with several hundred young women and men leaving their homes to go and join forces with the Islamic State in Iraq and Syria. For all the above reasons, the country assumes a huge importance for India.

Recognising the strategic significance of the country, Prime Minister Narasimha Rao had reached out to its leadership just after its independence by inviting President Akayev to visit India in 1992 and himself visiting the country in 1995. Subsequently however Kyrgyzstan fell off the radar screen of the Indian leadership. This neglect was set right by PM Modi with his visit to Kyrgyzstan last year on 11-12 July, 2015 on way back from Russia after the BRICS/SCO Summits. It is a matter of considerable satisfaction that President Atambayev has decided to visit India within 17 months of the visit by PM Modi to Bishkek. Visits by Indian Vice-Presidents to Bishkek took place in 1996 and 1999 but such tours by Vice-Presidents or even Presidents are never as substantive or effective as those by Prime Ministers. Presidential and Vice-Presidential visits are usually seen as occasions for pomp, show and glamour and to focus on cultural issues and softer aspects of relations and not on hard and vital elements of bilateral ties.

Trade and economic relations between India and Kyrgyzstan are at an uninspiring level of below US$ 30 million. Trade is weighted heavily in India’s favour. Connectivity is a formidable obstacle in expanding bilateral trade as Pakistan does not permit people and goods to travel to and from Kyrgyzstan through its territory. Recent initiatives by India to fast-track the construction, operationalisation, simplification and streamlining of procedures for transport over the International North-South Transport Corridor as well as construction of the Chabahar sea-port and its hinterland will go a long way in improving connectivity between the two countries.

During President Atambayev’s visit, areas of fight against terrorism and extremism, defence cooperation and enhancing trade and economic exchanges received particular attention. Both sides agreed to enhance collaboration in fighting the forces of militarism and violence.

Both countries collaborate in conducting defence exercises annually. The countries are jointly constructing the Kyrgyz-Indian Mountain Training Centre in Balykchi in Issyk-Kul district of Kyrgyzstan. This Centre will provide instruction and training to personnel of the Armed Forces of the Kyrgyz Republic and also host joint mountain training exercises. India has erected a military hospital and IT centers in a number of military institutions in Kyrgyzstan. The two countries also jointly undertake mountaineering expeditions to scale new and challenging peaks.

President Atambayev extended support to India’s membership of UN Security Council as well as to its imminent membership of Shanghai Cooperation Organisation. India’s membership of SCO will go a long way in strengthening its collaboration and partnership with the Central Asian Republics as it will provide an opportunity to Indian Prime Ministers in the coming years to regularly meet the Presidents of Central Asian Republics (CARs) on an annual basis at the SCO Summits. This will provide a significant impetus to India’s bilateral ties with CARs as also promote regional cooperation.

Six Agreements including collaboration in tourism, agriculture and food industry, youth development, training of diplomats, National Cadet Corps, and broadcasting and exchange of audiovisual programmes were signed. These will further strengthen official and people-to-people linkages.

India and Kyrgyzstan collaborate extensively in the area of conducting elections, training of personnel, sharing best practices in democracy building etc. India offered to share its experience in special courses which will be arranged for members and staff of the Kyrgyz Parliament. It can be said without fear of contradiction that amongst all the Central Asian Republics, democracy has developed the strongest roots in Kyrgyzstan.

The two countries collaborate in the joint Mountain Biomedical Research Center. India has established several telemedicine facilities in a number of districts in Kyrgyzstan. India contributes actively in training and upgrading human resources of the Kyrgyz public and private sector through the Indian Technical and Economic Cooperation (ITEC) Programme.

Bilateral Investment Treaty to promote economic exchanges was initialed by the two sides during the visit.The two countries are buiding on the progress achieved in the field of agriculture envisaging inter alia, University to University cooperation; setting up of a demonstration unit for drip irrigation; and promoting exports of dry fruits, honey and walnuts from Kyrgyz Republic to India. Kyrgyzstan welcomes India’s assistance in establishing aromatic industry and consultancy in the field of organic farming.

Tourism was identified as an important sector in which significant untapped potential exists.They agreed to work on simplifying and facilitating issuance of visas.

Kyrgyzstan highlighted opportunities available for Indian entrepreneurs as a result of their joining the Eurasian Economic Union (EEU). It may be recalled that a Working Group was establsihed last year to study the feasibility of India’s membership of EEU. Some complications could arise if, as reported recently in the media, EEU enters into a tie-up with the China-Pakistan Economic Corridor (CPEC) which runs from Gwadar in South Balochistan to Xinjiang in China.

President Atambayev particpated in a Joint Business Forum organised by ASSOCHAM, FICCI and CII in which he invited Indian businessmen to invest more and expand economic collaboration with Kyrgyzstan in the area of education, healthcare, pharmaceuticals, agricuture, food processing etc.

President Atambayev’s visit provided another opportunity to Prime Minister Modi to substantively interact with the leader of an important country in our extended neighbourhood. This was their third meeting over the past eighteen months, the second having taken place in Tashkent during the SCO Summit in June, 2016.

Discussions held and pacts signed will go a long way to further strengthen and expand cooperation in security, defence, trade, economic and cultural relations between the two countries.