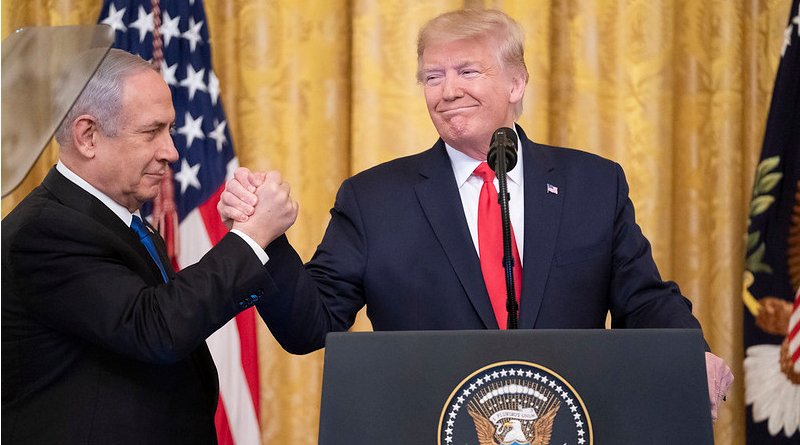 US President Donald Trump on Tuesday unveiled a long-awaited Middle East peace plan that broadly favored Israel, as expected, but also defied expectations by offering the Palestinian people a path to statehood.

Trump proposed a Palestinian state double the size of the existing Palestinian territories, with East Jerusalem as its capital and a US Embassy there; high-speed rail links between Palestinian areas and a tunnel linking the West Bank and Gaza; a four-year ban on Israeli settlement building on land earmarked for a Palestinian state; $50 billion in economic aid; and continued oversight by Jordan of Al-Aqsa mosque compound.

However, major Israeli settlements would remain, puncturing large parts of Palestine, Israel would take control of the whole Jordan Valley, and the refugee issue must be “settled outside Israel.”

Trump unveiled his plan at the White House alongside Israeli Prime Minister Benjamin Netanyahu, before an audience comprising mostly supporters of Israel but also including ambassadors from the UAE, Bahrain and Oman.

He admitted the plan was good for Israel, but said it also had to benefit the Palestinians “otherwise it wouldn’t be fair.”

“I am saddened by the fate of the Palestinian people. They deserve a far better life,” he said.

Trump said his plan would end “Palestinian dependency on charity and foreign aid. We will help the Palestinians to thrive on their own. The Palestinians will be able to seize the future … We are asking them to meet the challenges of peaceful coexistence.”

He said Israel would work closely with Jordan to preserve the status quo of Al-Aqsa mosque compound.

Trump said he had written to Palestinian President Mahmoud Abbas “explaining the territory allocated for his new state.”

“It will become a wonderful Palestinian state,” he said. “President Abbas, I want you to know, if you chose the path to peace, America will be there … every step of the way. We will be there to help.”

However, Abbas immediately rejected the plan on Tuesday night. Visibly angry on Palestinian TV, he said: “No, a thousand times no.”

That the plan was based on a unified Jerusalem as the undivided capital of Israel is “enough for us to reject it,” he said.

Husam Zumlot, the Palestinian ambassador to the UK, told Arab News: “There are 13 million Palestinians in Palestine and the world, and the very fact that the American administration couldn’t find a single Palestinian to appear in that White House room says volumes about the one sidedness of the deal.”

In Lebanon, the Fatah movement called for a “day of rage” to resist the deal.

*Daoud Kuttab reported from Amman and Najia Houssari from Beirut