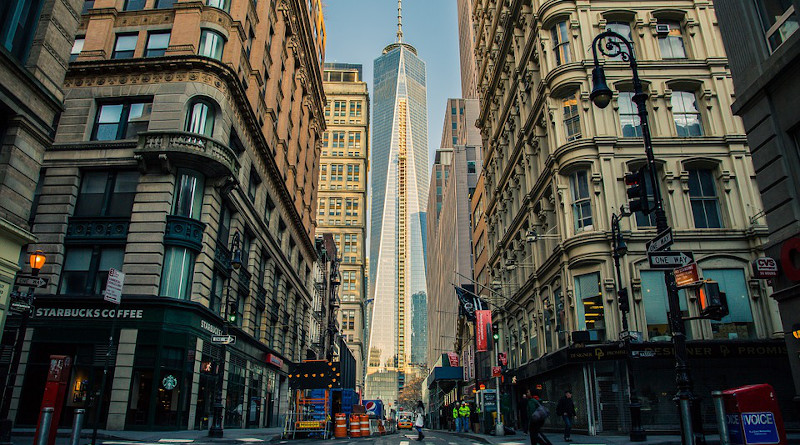 If we combine these two states, we find that a majority of COVID-19 deaths in the United States have come from them alone. Combined, these two states accounted for more than 51 percent (28,213) of all deaths, while all other states combined made up less than 48.5 percent (or 26,567) of deaths.

New York’s number of deaths per 100,000 soars above those of all other states, is double that of Massachusetts, and is more than seven times those of Maryland and Pennsylvania.

The difference becomes even more stark as we move west and south. New York’s death rate is now 22 times as large as Florida’s and 25 times that of Alabama.

Were New York a foreign country, the US’s total death rate from COVID-19 would be cut by 36 percent:

Whenever comparisons of this sort are made, however, many claim that all areas of the country will closely follow in New York’s footsteps unless ever more strict lockdown measures are taken immediately.

Indeed, we’ve been hearing for weeks that various states and regions are just “two weeks behind New York” in terms of COVID-19 infections and deaths.

For example, more than a month ago, the Philadelphia Inquirer on March 27 quoted one medical expert claiming: “We anticipate we are no more than two weeks behind New York City….Cases are doubling every two to three days. We had 46 confirmed cases last night. You do the math.”

Also in Pennsylvania, a medical expert from Lehigh Valley on March 22 insisted that “we are two weeks behind Manhattan in terms of spread and seriousness.”

On April 3, Maryland governor Larry Hogan proclaimed that his state was “about two weeks behind New York.”

Meanwhile, on April 1 WBHM reported that an Alabama health official had claimed: “Birmingham is about two weeks behind New York City.” Nearly a month later, Jefferson County, Alabama, where Birmingham sits, reports a death rate of 5 per 100,000, or 4 percent the size of New York’s death rate.

When we note outlandishly incorrect predictions such as these, a common response from lockdown boosters is “Well, social distancing prevented that!”

So far, there’s no empirical evidence even showing that social distancing works. As T.J. Rodgers wrote in the Wall Street Journal this week, there is no correlation between government-forced “shutdowns” and a muted number of deaths from COVID-19:

No conclusions can be drawn about the states that sheltered quickly, because their death rates ran the full gamut, from 20 per million in Oregon to 360 in New York. This wide variation means that other variables—like population density or subway use—were more important. Our correlation coefficient for per-capita death rates vs. the population density was 44%. That suggests New York City might have benefited from its shutdown—but blindly copying New York’s policies in places with low Covid-19 death rates, such as my native Wisconsin, doesn’t make sense.

Similarly, political scientist Wilfred Reilly ran the numbers, taking into account factors such as population and population density. He found no evidence “that lockdowns are a more effective way of handling coronavirus than well-done social-distancing measures” and concluded:

The question the model set out to ask was whether lockdown states experience fewer Covid-19 cases and deaths than social-distancing states, adjusted for all of the above variables. The answer? No. The impact of state-response strategy on both my cases and deaths measures was utterly insignificant.

Moreover, the timing is less than convincing for the “lockdowns worked!” claims. For example, in the case of Maryland, the governor claimed, “we’re two weeks behind New York,” even after a stay-at-home order was in place. That is, his prediction assumed social distancing. Nearly a month later, Hogan was clearly very wrong.

In Alabama, on the other hand, a statewide stay-at-home order did not come down until thirteen days (i.e., nearly two weeks) after the New York lockdown. Had Alabama truly been “two weeks behind,” it would have already been nearly comparable to New York in its death rate by the time the order was implemented. Obviously, that didn’t happen.

The truth, of course, is that these statements by politicians and government “experts” were attempts to justify extreme government edicts that have created widespread unemployment, poverty, child abuse, and illness. They are irresponsible scare tactics employed for political purposes, and were never based on any actual evidence or knowledge about the situation. After all, these officials don’t even know the fatality rate of COVID-19.

Now, it’s entirely possible that as time progresses later waves of illness could increase total deaths, and there may be some “hot spots” where there are serious strains on the medical infrastructure. However, given the track record of the experts in predicting who is two weeks behind New York, it looks like it will only be a coincidence if these predictions of New York–like death rates prove correct at some point. Just as financial permabears often “predict ten of the last two recessions,” I have no doubt that many government-employed experts will predict twelve of the next three hot spots. Meanwhile, thanks to these experts’ recommendations, important medical procedures will be banned, people in need of medical care will be frightened into staying home, and food shortages may become a reality.

The real question we should be asking ourselves is why is New York is such a mess in terms of COVID-19? New York’s deaths aren’t just high by US standards. The state’s total deaths per 100,000 are higher than both Spain’s and Italy’s, both of which are considered to be among the most hard-hit countries on earth. New York has reported nearly as many COVID-19 deaths as Spain (23,500), even though Spain has a much larger population of 46 million. New York is also only about 5,000 deaths behind Italy, even though Italy has a population three times the size of New York State.

Indeed, these numbers are so high that one wonders if deaths are even being counted properly, or if there is something about New York’s medical infrastructure that is especially inferior. Perhaps New York is home to a particularly virulent strain of the disease. Perhaps the disease was in circulation for far longer than the experts insist is the case. The experts don’t know the answers to these questions.

Nor should we expect answers to these questions any time soon. But what we do know is that it strains the bounds of credibility to insist that South Dakota will soon be New York if it doesn’t impose similar lockdown measures. This doesn’t mean that no caution is warranted, or that high-risk populations should neglect social-distancing measures. But the claims that we’re all “two weeks behind New York” are neither accurate nor helpful.