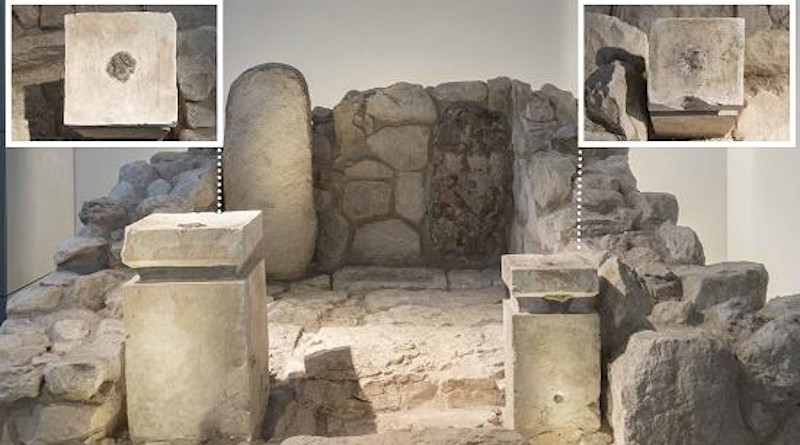 Analysis of the material on two Iron Age altars discovered at the entrance to the “holy of holies” of a shrine at Tel Arad in the Beer-sheba Valley, Israel, were found to contain Cannabis and Frankincense, according to new article in the journal, Tel Aviv.

Past excavations revealed two superimposed fortresses, dated to the 9th to early 6th centuries BCE, which guarded the southern border of biblical Judah. Highly important Iron Age finds were unearthed, including a well-preserved shrine that was dated to ca. 750-715 BCE.

Evidently, they had played an important role in the cult practices of the shrine. An unidentified black solidified organic material was preserved on the altars’ surfaces. Past analysis of these materials failed to identify their content and this dark material was recently submitted to organic residue analysis by modern methods.

These unique findings shed new light on cult practices in biblical Judah, suggesting cannabis was used here as a deliberate psychoactive, to stimulate ecstasy as part of cultic ceremonies.

Lead author Eran Arie from The Israel Museum in Jerusalem commented, “This is the first time that cannabis has been identified in the Ancient Near East; Its use in the shrine must have played a central role in the cultic rituals performed there.”

Frankincense comes from Arabia. Therefore, the presence of frankincense at Arad indicates the participation of Judah in the south Arabian trade even before the patronage and encouragement of the Assyrian empire. Arad provides the earliest evidence for frankincense in a clear cultic context. Frankincense is mentioned as a component of the incense that was burned in the Temple of Jerusalem for its pleasant aroma.

The “fortress mound” of Tel Arad in the Beer-sheba Valley in southern Israel was excavated over 50 years ago under the direction of the late TAU Professor Yohanan Aharoni.