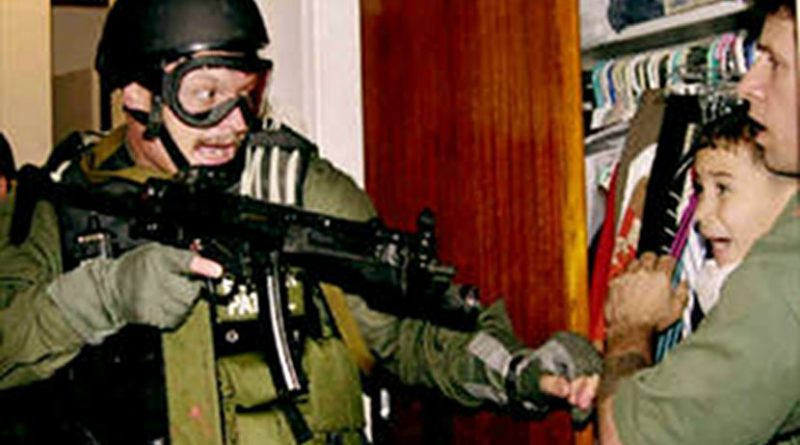 Unidentified border patrol officer during the seizure of Elián González from his uncle's residence on April 22, 2000. Photo Credit: Lowe resolution of photograph taken by Alan Diaz of the Associated Press, Wikimedia Commons.

Every Trump voter is effectively “standing at the border, like Nazis, going ‘you here, you here,'” MSNBC guest Danny Deutsch declared on Friday. Former CIA Director Michael Hayden also compared the Trump administration’s immigration crackdown with Nazi concentration camps. The media is showcasing the anguish of parents and children forcibly separated at the southwestern border.

Eighteen years ago, the media had a mirror-image reaction to perhaps the most famous immigration raid in American history. Though some critics back then complained of Gestapo-like federal raid, much of the media downplayed or whitewashed the alleged brutality.

On April 22, 2000, 130 federal agents conducted a pre-dawn raid in Miami’s Little Havana section to seize Elian Gonzalez, a six-year-old Cuban boy. The raid shattered doors, broke a bed, roughed up Cuban-Americans, and left two NBC cameramen on the ground, writhing in pain from stomach-kicks or rifle-butts to the head. The raid seemed to go off without a hitch until a photo surfaced taken by Associated Press stringer Alan Diaz showing a Border Patrol agent pointing his submachine gun toward the terrified boy being held by the fisherman who rescued him six months earlier from the Atlantic Ocean.

While Trump administration’s falsehoods on immigrations have been widely hammered, few people recall the Clinton administration’s rhetorical backflips. A few hours after the Elian raid, Deputy Attorney General Eric Holder asserted in a press conference that the boy “was not taken at the point of a gun .” When challenged about the machine gun in the photo, Holder explained: “They were armed agents who went in there who acted very sensitively .”

Attorney General Janet Reno, when asked about the photo, stressed that the agent’s “finger was not on the trigger .” But that is scant consolation when a highly agitated person is holding a Hechler and Koch MP-5 that sprays 800 rounds a minute. Two days later, Reno declared, “One of the things that is so very important is that the force was not used. It was a show of force that prevented people from getting hurt.” This would be news to the people kicked, shoved, and knocked down by federal agents.

When White House spokesman Joe Lockhart was asked whether federal agents had used excessive force, he stressed that the agents “drove up in white mini-vans ” – as if the color of the vehicles proved it was a mission of mercy. Lockhart implored the media: “It’s certainly my hope that those who are in the business of describing such things to the public will use great care and great perspective ” in how they presented Diaz’s photo.

After film footage showed a female Immigration and Naturalization Service agent carrying Elian out of the house with a look of horror on the boy’s face, one cynic commented that she looked like a vampire excitedly carrying away her breakfast. However, INS Chief Doris Meissner dismissed concerns about the boy’s well-being and stressed that Elian was quickly given Play-Doh after he was taken into custody. Meissner explained, “The squeezing of Play-Doh is the best thing that you can do for a child who might be experiencing stress.”Meissner did not disclose which color of Play-Doh is the best antidote for facing a machine gun.

The news media buttressed the Clinton administration storyline. Less than three hours after the raid, CBS news anchor Dan Rather interrupted the televising of Reno’s press conference to assert: “Even if the photographer was in the house legally … there is the question of the privacy, beginning with the privacy of the child.”Rather was more concerned about the photographing of the boy’s terror than about the terrorizing itself.

The New York Times refrained from running the AP photo on the front page, instead giving it the treatment usually reserved for propaganda images from Communist regimes. The photo appeared on page 16 along with a side article by a Times media critic to help readers “put in context” the apparent violence.

New York Times columnist Thomas Friedman, in an article headlined, “Reno for President,” declared that the machine gun photo “warmed my heart” and symbolized that “America is a country where the rule of law rules. This picture illustrates what happens to those who defy the rule of law and how far our government and people will go to preserve it.” But since the Clinton administration’s attempt to seize Elian had been rebuffed by a federal appeals court two days earlier, the legality was shaky and rejected even by liberal icons such as Harvard Law professor Laurence Tribe .

For much of the press corps, the real peril was that the Diaz picture “will ignite all the crazies,” fretted James Warren, Washington bureau chief of the Chicago Tribune . Author Garry Wills, writing for the New York Times op-ed page, portrayed the feds as victims of citizens’ distrust: “ The readiness of people to deplore ‘jack-booted’ tactics reveals the intransigence that made the rescue necessary.”

It is difficult to believe that such sentiments occurred in the same nation or even the same century as the ongoing backlash against ICE enforcement tactics. Is it a sign of progress that the news media no longer automatically cheers heavy-handed crackdowns by federal agents? The jury will remain out on that question at least until January 2021.

About the author:
*James Bovard is the author of ten books, including 2012’s Public Policy Hooligan, and 2006’s Attention Deficit Democracy. He has written for the New York Times, Wall Street Journal, Playboy, Washington Post, and many other publications.