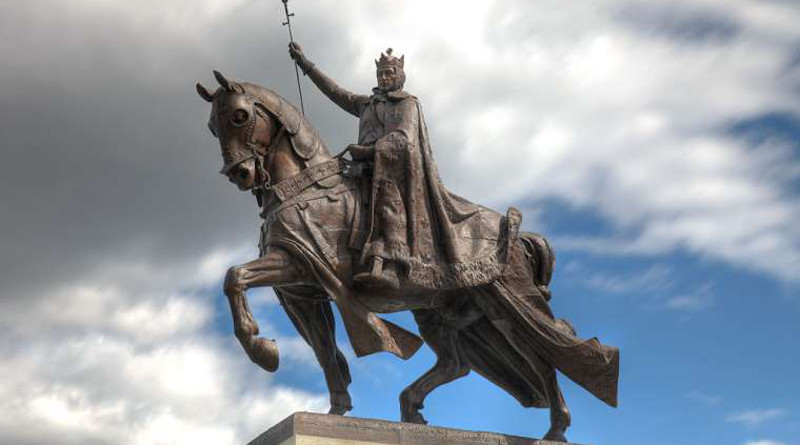 Fr. Stephen Schumacher, a priest of the Archdiocese of St. Louis, was among the defenders of a prominent statue of the city’s namesake as protesters called for its removal Saturday.

Fr. Schumacher, whose priestly ordination was in May 2019, addressed a shouting mob, attempting to inform them about St. Louis’ life, saying, “St. Louis was a man who willed to use his kingship to do good for his people.”

Moji Sidiqi of the Regional Muslim Action Network, another organizer of the protest,  said: “It’s a revolution. It’s time for change … right now, our number one mission is to take this thing down and sit down with people who want to see positive change take place and continue to heal our country.”

Sidiqi added that she thought the city should be renamed.

The statue, Apotheosis of St. Louis, sits in the city’s Forest Park in front of the Saint Louis Art Museum. It was erected in 1906 and depicts Louis IX of France, for whom the city is named.

According to the St. Louis Post-Dispatch, some 200 people were at the protest. Catholics defending the statue at the protest prayed the rosary and sang, and several police officers separated them from the protesters.

St. Louis was King of France from 1226-70, and he partook in the Seventh and Eighth Crusades. He restricted usury and established hospitals, and personally cared for the poor and for lepers. He was canonized in 1297.

Numerous statues of historic figures have been pulled down in recent weeks amid ongoing protests and riots throughout the country. While some protests have torn down the statues of Confederate figures as part of a call to end systemic racism, other statues have also been torn down from prominent locations, including one of George Washington.

Several statues of St. Junipero Serra have been pulled down or protested against.

In a June 23 letter, Bishop Donald Hying of Madison wrote that “If we allow the commemorative and visual history of our nation to be destroyed by random groups in the current moment of anger, how will we ever learn from that history? Does toppling and vandalizing a statue of George Washington because he owned slaves, really serve our country and our collective memory?”

“The secular iconoclasm of the current moment will not bring reconciliation, peace, and healing. Such violence will only perpetuate the prejudice and hatred it ostensibly seeks to end…Only the love of Christ can heal a wounded heart, not a vandalized piece of metal,” the bishop added.