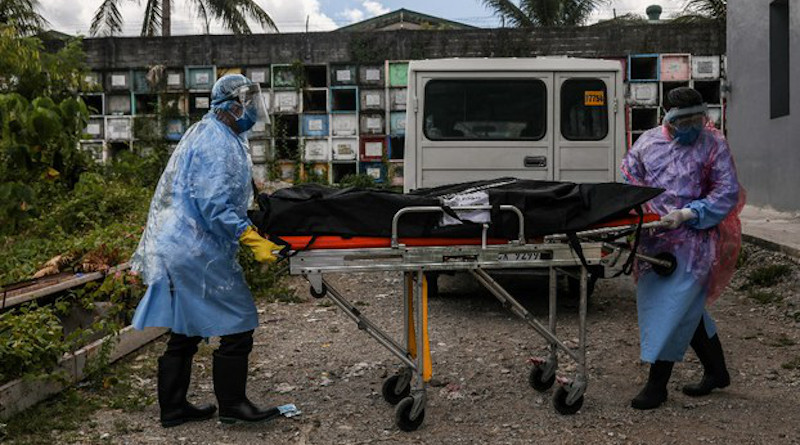 Workers wear COVID-19 protective gear as they use a stretcher to bring a body bag into the Baesa Crematorium in Quezon City, Philippines, May 5, 2020. Photo Credit: Basilio Sepe/BenarNews

The Philippine health-care system was on the verge of being overwhelmed by the COVID-19 pandemic as infections surge, a top health official warned on Tuesday.

Tuesday’s total of 83,673 coronavirus cases showed an increase of 1,678 in one day – the 14th consecutive where infections topped 1,000, according to Department of Health. Four people died, bringing the death toll to 1,947.

Health Undersecretary Maria Rosario Vergeire said that more than half of the estimated 16,388 hospital beds dedicated for COVID-19 patients across the country were occupied as of last weekend, adding the “bed occupancy” rate had reached the “warning zone.”

“What does this mean? Nationally, our health system will soon be overwhelmed – our doctors, nurses and other health care workers in hospitals will get tired,” she said in an online new briefing on Tuesday.

The government has sought out additional medical workers, she said.

“There are no new applicants. There are no takers,” Vergeire said, articulating the frustration amid the pandemic.

“Unfortunately, it’s getting harder. There are a lot of positions but there are no takers for the slots offered. So we are now discussing within DOH (health department) what would be the next move to do,” she said.

The government has been forced to contact universities to send their medical students to help out in hospitals, she said.

Regarding vaccines, Vergeire said the health department was in talks to allow the Philippines to participate in clinical trials with four drug manufacturers in China and Taiwan.

Her announcement came a day after President Rodrigo Duterte revealed that he spoke to Chinese leader Xi Jinping to allow the Philippines to be among the first countries to have access once Chinese scientists develop a vaccine. Duterte warned Filipinos that “worse times loom ahead” as the virus wreaks havoc on the economy.

“No nation was spared, neither rich nor poor were exempt. Let us not despair. The vaccine is around the corner. Sooner but not later, the virus that gobbled thousands of lives will itself be laid to rest,” he said.

The Philippines follows only Indonesia, which has reported more than 102,000 COVID-19 cases, in the number of infections among Southeast Asian nations. Globally, more than 16.5 million cases and more than 655,000 deaths have been recorded, according to disease experts at U.S.-based Johns Hopkins University.

Home » Philippines: Health System In Danger Of Being Overwhelmed By COVID-19