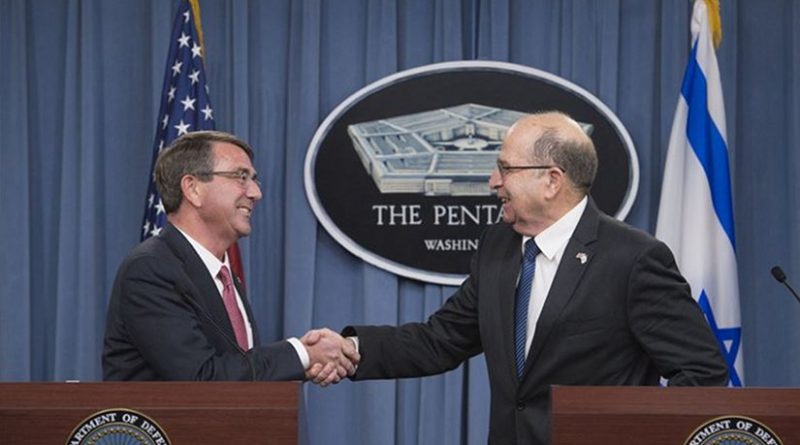 Carter stressed the U.S. commitment to Israel, while Yaalon used his time to warn of the danger of Iran.

In his remarks at the Pentagon, Carter noted the Joint Strike Fighter is the visible manifestation of U.S. support for Israel. The Israeli air force will start receiving the aircraft next year and will be the only force in the region to be armed with a fifth-generation fighter.

“For Israel, the current regional situation presents daily threats to the state, its economy, and its democracy,” Carter said. “As we have since its founding, the United States stands with Israel, and we always will.”

“These are especially turbulent years in our region, with states collapsed and being replaced by various entities and terror organizations — many affiliated with global jihad and the Islamic State, one fighting against other, glorifying death and destruction and challenging the entire U.S.-led Western world,” Yaalon said.

“Some of these terror entities are founded, armed and trained by Iran, who, despite the nuclear agreement, continues … to view America as a great Satan and Israel as a small one,” he continued.

The Israeli defense minister said Iran wants to spread the Islamic revolution far and wide and is actively working in that direction through the use of proxies.

“Iran is invested in over its head in the fighting in Syria and in defending the murderous regime of Bashar al-Assad,” Yaalon said. “This is also likely to position Hezbollah operating under Iran’s support and direction on our northeastern border, from where, in addition to Lebanon, it can conduct even more terror operations.”

About 1,500 to 2,000 members of the Iranian Revolutionary Guard Corps, allied with Hezbollah in Syria, operate under the umbrella of Russian air power inside Syria, the Israeli defense minister said.

During Yaalon’s visit, he and Carter also visited U.S. Cyber Command at Fort Meade, Maryland, to explore additional ways the two countries can work together.