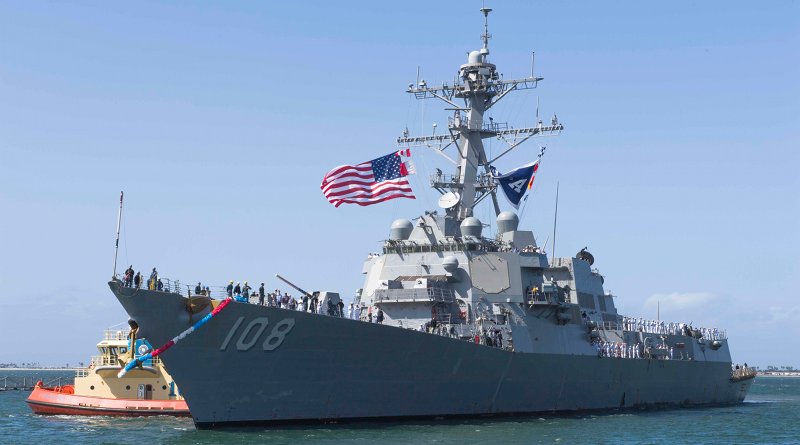 The inaugural ASEAN-U.S. maritime exercises (AUMX), coming off from last year’s naval exercises with China (ACMX), display a regional desire for inclusivity and balanced security ties with the two great powers. The succession is no coincidence and is indicative of intensifying major power contest playing out in defense diplomacy. Recent incidents in the South China Sea add a unique flavor to this year’s joint exercises.

The United States has been the region’s long-standing provider of security goods and the AUMX builds on that tradition. Cooperation Afloat Readiness and Training (CARAT) since 1995 and an expanded Southeast Asia Cooperation and Training (SEACAT) since 2012 constituted two long-running platforms by which the U.S. engages regional navies and coast guards. As China shows readiness and capability to enter the security fray, such U.S. reaffirmation cannot be more timely. AUMX may also signify ASEAN’s response over Chinese proposals to constrain or upend security engagement with non-regional powers.

In terms of scale, both joint exercises are comparable, but the theater and nature of exercise activities make for a considerable difference. The number of assets and personnel involved in AUMX and ACMX are roughly equal. Had Myanmar not tipped the balance in favor of AUMX, both Washington and Beijing had the same identical five ASEAN states – Philippines, Vietnam, Singapore, Thailand, Brunei – which sent vessels and troops for their respective joint exercises. Indonesia and Malaysia, both significant regional maritime actors, stayed out of deploying assets in the two exercises, opting to send observers instead like the remainder. Such a display of consistent neutrality heralds the importance Jakarta and Kuala Lumpur assigns to their respective relations with the two powers. Last year’s ACMX field exercises were held off southern China and focused on search and rescue and application of the Code for Unplanned Encounters at Sea. In contrast, this year’s setting covered waters of the Gulf of Thailand and South China Sea. AUMX included exercises on a visit, board, search and seizure, maritime domain awareness and maritime asset tracking, capabilities critical in checking illegal fishing and monitoring gray zone actors and un-innocent forays.

Variance in assets dispatched may also suggest nuance. Last year, Manila, despite warming ties with Beijing, only deployed a logistics support ship, while sending an offshore patrol vessel this year. Vietnam, on the other hand, sent one of its most advanced and recently commissioned Russian-built frigate to join last year but opted for a smaller Korean-decommissioned corvette this time. This is despite tensions triggered by Chinese survey activities in Vietnam’s continental shelf. Hanoi may still be holding back, hoping the dialogue will still resolve rumbling tensions over Vanguard Bank, but for how long this patience can withstand before turning into frustration remains to be seen. While some ASEAN states express growing concern about certain Chinese actions in the South China Sea and are subtly pushing back against them, they are careful not to send a wrong signal to Beijing. They would not want to be seen as taking part in containing their big northern neighbor which has become their largest trade partner and major investor and infrastructure financier.

In both exercises, non-claimant states served as co-organizers – Singapore for ACMX and Thailand for AUMX. Bangkok’s co-hosting of AUMX may presage renewed US-Thai security relations troubled since the 2014 military coup. Meantime, it may still be early to ascertain whether there is an incipient thaw in US-Myanmar ties following Naypyidaw’s participation in spite of prevailing sanctions arising from the Rohingya refugee crisis.

Last year’s ASEAN-China tabletop and field training maritime exercises were ASEAN’s first. But whatever splash in the water it created easily fizzled because of a string of sea incidents this year involving China and ASEAN claimants Philippines, Vietnam, and Malaysia. Indeed, territorial and maritime disputes continue to limit ASEAN-China maritime security cooperation. Hence, despite proximity and massive economic largesse, Beijing should have a managed expectation of its security ties with regional states and must be in for the long haul.

Washington, in turn, has been stepping up cooperation, including with regional maritime law enforcement agencies, some of which are relatively new, ill-trained and under-equipped to confront a myriad of security challenges facing them. It may be a surprise for AUMX to take this long to come about given America’s network of regional allies and partners. It is possible that the need was not as strongly felt as before and ASEAN’s reluctance hindered it. Whatever the case is, ASEAN continues to see the U.S., despite the distance and doubts to its security commitments especially under a transactional and unpredictable Trump Administration, as a pivotal player in one of the world’s most strategic maritime spaces.

Home » ASEAN-US Maritime Exercises Are More Important Than Ever – Analysis