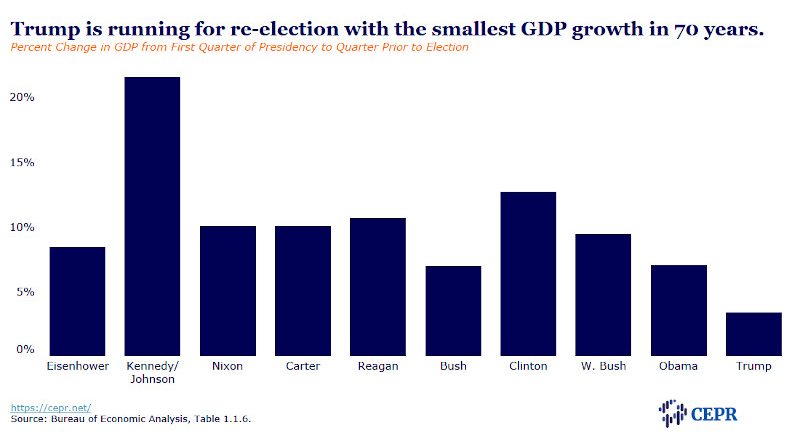 GDP grew at a record 33.1 percent annual rate, as the economy bounced back from the pandemic-driven shutdowns in the second quarter. However, even with this record growth, the economy was still 3.5 percent below its pre-pandemic level. If we assume a modest 2.0 percent annual growth rate, the third quarter GDP would be more than 5.0 percent below the trend path from the pre-recession period.

There are very different growth stories depending on the sector. Goods output in most areas has largely recovered from the shutdown, with much of third-quarter spending the result of pent-up demand. Consumption of durable goods was 11.9 percent above the 2019 fourth-quarter level, as spending on cars, furniture, and recreational goods and vehicles were all sharply higher. Spending on nondurable goods is up a more modest 4.0 percent from the fourth-quarter level, mostly due to people buying food at stores instead of eating at restaurants.

Housing construction rose at a 59.3 percent annual rate, adding 2.09 percentage points to the quarter’s growth. Residential construction in the third quarter was 5.1 percent above its 2019 fourth quarter level. This reflects both extraordinarily low interest rates and the many people that opted to move in response to the pandemic and increased opportunities for remote work.

Nonresidential investment boomed in the third quarter, rising at a 20.3 percent annual rate. However, this was all driven by a 70.1 percent rise in equipment investment, as investment in structures fell at a 14.6 percent rate, while investment in intellectual products declined at a 1.0 percent rate.

The bounce back in equipment investment is due to both factories being able to reopen and operate near capacity and strong demand for cars and other durable goods. Equipment investment is just 1.9 percent below the pre-pandemic level. The drop in structures can be explained by reduced demand for office space and also retail space as the pandemic has led to a huge shift towards online shopping. Structure investment in the quarter was 14.0 percent below the pre-pandemic level. The decline in investment in intellectual products is partially attributable to the decline in movie production due to the pandemic.

The trade deficit rose by 235.7 billion dollars, hitting a record of 1010.8 billion dollars. (Measured as a share of GDP, the deficits in the 00s were larger.) Both exports and imports soared in the quarter, with exports rising at a 59.7 percent annual rate, while imports rose at 91.1 percent rate. Trade reduced the growth rate in the quarter by 3.09 percentage points.

Spending at the state and local government level contracted at 3.3 percent annual rate, following a decline of 5.4 percent in the second quarter. Spending is now 1.9 percent below the pre-pandemic level. With nearly all state and local governments facing serious budget shortfalls due to collapsing tax revenue, more cuts in the rest of 2020 and into 2021 will be inevitable, unless the federal government comes through with additional support.

The Future Is Not Bright

We have already seen most of the pent-up spending, and with the ending of the unemployment insurance supplements, tens of millions of unemployed workers will have far less to spend. With cutbacks at the state and local government level likely to accelerate, and the pandemic forcing further closures, we are likely to see negative growth in the fourth quarter.