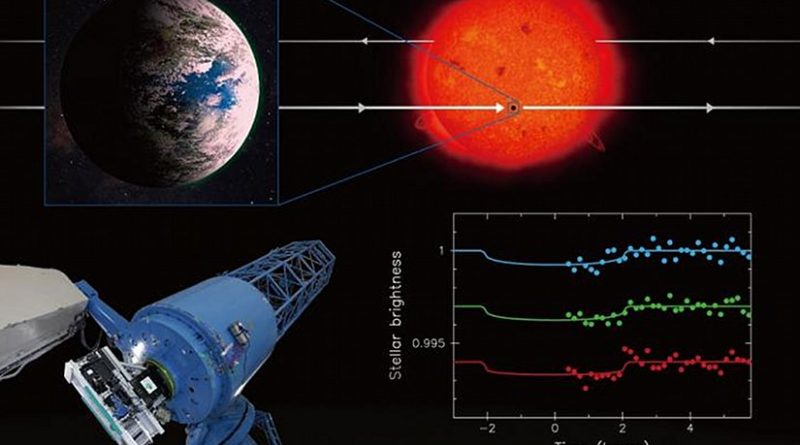 This collage summarizes the research. Using the Okayama 188-cm Reflector Telescope and the observational instrument MuSCAT (See real photo on the bottom left.), researchers succeeded in observing the extrasolar planet K2-3d, which is about the same size and temperature as the Earth, pass in front of its host, the primary star blocking some of the light coming from the star (See artistic visualization at the top.), making it appear to dim (See real data on the bottom right.). Credit: NAOJ

A group of researchers from the National Astronomical Observatory of Japan (NAOJ), the University of Tokyo, and the Astrobiology Center among others has observed the transit of a potentially Earth-like extrasolar planet known as K2-3d using the MuSCAT instrument on the Okayama Astrophysical Observatory 188-cm telescope. A transit is a phenomenon in which a planet passes in front of its parent star, blocking a small amount of light from the star, like a shadow of the planet. While transits have previously been observed for thousands of other extrasolar planets, K2-3d is important because there is a possibility that it might harbor extraterrestrial life.

By observing its transit precisely using the next generation of telescopes, such as TMT, scientists expect to be able to search the atmosphere of the planet for molecules related to life, such as oxygen.

With only the previous space telescope observations, however, researchers can’t calculate the orbital period of the planet precisely, which makes predicting the exact times of future transits more difficult. This research group has succeeded in measuring the orbital period of the planet with a high precision of about 18 seconds. This greatly improved the forecast accuracy for future transit times. So now researchers will know exactly when to watch for the transits using the next generation of telescopes. This research result is an important step towards the search for extraterrestrial life in the future.

K2-3d1. The discovery of K2-3d was reported by a research team led by Ian Crossfield (University of California, Santa Cruz) in 2015.
2. The next generation of large telescopes includes the James Webb Space Telescope (JWST), which NASA will launch in 2018, and the Thirty Meter Telescope (TMT), which is being pursued through international collaboration including Japan.