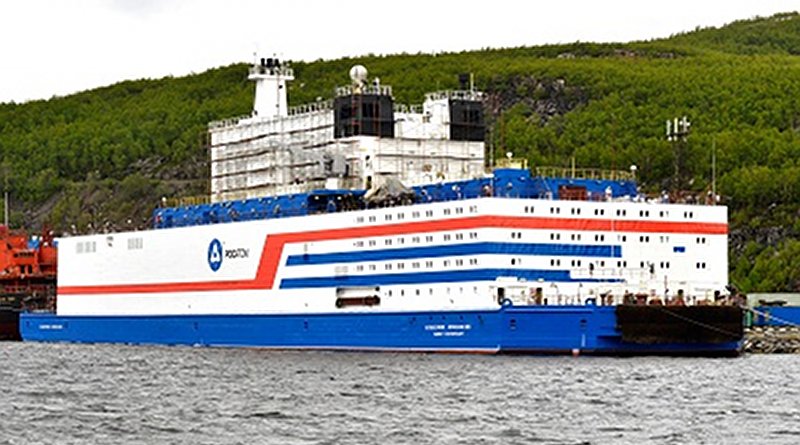 When it wasn’t burning, Siberia was flooding.

The permafrost in the Far North continued to melt, and the Arctic ice kept breaking up.

But as a year that underscored the troubles in store for Russia from global warming comes to a close, Moscow is making plans to “adapt” to climate change — and seek to profit from it.

“Our temperatures are rising 2 1/2 times faster than the global average,” Putin said. “We, as you know, are a northern country — 70 percent of our territory is located in the northern latitudes. We have entire cities above the Arctic Circle that are built on permafrost. If it begins to melt, just imagine what consequences may arise here for us. Very serious.”

Not A Great Year, Environmentally Speaking

Russia dealt with a number of serious environmental issues in 2019 that many officials attributed to global warming.

In February, a state of emergency was declared in Novaya Zemlya when the northern archipelago was overrun by starving polar bears left with nowhere to go after thinning ice floes forced them to stay on land.

In July, the southern Siberian region of Irkutsk was overwhelmed by floodwaters in a deluge that left at least 25 people dead and forced more than 10,000 to evacuate.

And from June to September, wildfires raged across Siberia, costing the Russian economy at least 15 billion rubles ($240 million). Such fires occur every year and the governor of the vast Krasnoyarsk Krai, Aleksandr Uss, said it was “senseless to fight” them, but the 2019 blazes were among the biggest ever.

The persistent loss of permafrost, meanwhile, has unearthed some interesting finds in the form of prehistoric beasts. But it also released harmful greenhouse gases into the atmosphere and destroyed infrastructure in resource-rich areas, costing Russia an estimated 50 billion to 150 billion rubles ($800 million to $2.4 billion) a year. ​

Breaking In A ‘New Suez’?

The Arctic Ocean, which defines Russia’s northern shores, is warming at twice the rate of the rest of the world, according to the Arctic Program’s annual report card.

But rather than fret during a late December meeting in Murmansk on the grounds of Atomflot, the subsidiary of state nuclear company Rosatom that maintains the world’s only fleet of nuclear-powered icebreakers, the Russian Arctic Commission looked for ways to cash in.

During the sit-down with government officials and heads of state companies, meeting the goals of a proposed new Arctic strategy to plot Russia’s course through 2035 was the main topic of discussion.

“One of the main tasks,” said Deputy Prime Minister Yury Trutnev, who is also Putin’s envoy to some of his own country’s most remote reaches, “is to fulfill the order to increase the transport of goods along the Northern Sea Route to the amount of 80 million tons by 2024.”

That amount would be more than double the cargo currently being shipped by container along the 5,600-kilometer route from Novaya Zemlya to the Bering Strait, during the limited season when warm weather makes it passable.

The idea behind the Northern Sea Route is to take advantage of opening Arctic waters to deliver cargo around the world at a huge savings. Some compare it to the Suez Canal, which drastically altered global trade by cutting thousands of kilometers off routes from Europe to Asia — and describe it as a competitor of the 150-year-old waterway. Rosatom alone hopes to rake in $5.6 billion by 2026.

There’s a catch, though.

For it to work, new infrastructure must be in place to boost the production and export of oil and natural gas, and assurances are needed to ensure that the route is ice-free and secure from potential threats.

To clear the way, Russia has gone all-in on expanding its fleet of icebreakers with five nuclear-powered ships.

The Arktika, the first of the massive new rigs commissioned by Atomflot, began sea trials in December and is expected to enter service in the summer of 2020. Two others will be ready by 2024 and 2026, respectively, and a $1.5 billion contract for a further two was inked in August.

To feed it, Russia plans to develop new oil and natural-gas fields in the Far North.

Novatek, which became one of Russia’s biggest producers of liquefied natural gas (LNG) two years ago when it brought its plant in the Yamalo-Nenets Autonomous District on line, is now working on opening a new $21 billion plant in the region known as LNG-2.

However, Novatek has been refused funding from the state, which wants to rely on tax breaks to spur 15 trillion rubles ($242 billion) in private investment in the Arctic and Far East.

New sources of oil are also a concern.

Energy Minister Aleksandr Novak warned in September that Russia was only three years from peak oil, the point at which extraction is at its highest, threatening to send production into decline unless vast Arctic resources are tapped.

To help fuel offshore oil rigs in the Far Eastern region of Chukotka, across from Alaska, Russia has launched the Akademik Lomonosov, its first floating nuclear-power station.

While Greenpeace has dubbed it a “nuclear Titanic,” the barge was hailed by Rosatom as “a stronghold for the development of western Chukotka and a key link in the Northern Sea Route” when it powered up in December.

Finally, to protect it all, Russia has embarked on a huge military push.

In September, Russia deployed S-400 missile systems on Novaya Zemlya as part of a broader effort to place the Arctic under an air defense “dome.”

Six new military bases have been established in Russia’s Far North, and the military has launched its own armed nuclear icebreakers.

Bad Even Amid Good

Even when there was cause for celebration when it came to the environment in Russia, there were reasons to worry.

By bringing the Akademik Lomonosov online, for example, Rosatom was able to shut down the obsolete Bilibino nuclear power plant, as well as an aging coal-fired plant.

But the addition of new ship-based reactors contributed to making the Arctic easily the most nuclearized ocean in the world, raising fears of accidents that could destroy the region’s delicate biodiversity.

And the discovery of new islands in the Novaya Zemlya archipelago in October seemed like a hollow victory, considering they were exposed as a result of global warming.

“Previously these were glaciers, but the melting of ice led to the islands emerging,” Vice Admiral Aleksandr Moiseyev, who led an expedition there, said on October 22.

Speaking to RFE/RL’s Russian Service, Grigory Kuksin, head of Greenpeace Russia’s fire-protection program, described Russia as the “most important territory from the point of view of preserving the climate on the planet.”

But as Russia prepares to have a greater voice when it takes over the two-year chairmanship of the intergovernmental Arctic Council in 2021, the resolutions coming out of Moscow might set off alarm bells.

Speaking of climate change at an Arctic forum in 2017, Putin said that the goal is “not to stop it…because that’s impossible, since it could be tied to some global cycles on Earth or even on a planetary scale” as opposed to human activity.

Putin made similar remarks at his press conference this month, asserting that it is “very difficult, if even possible at all, to quantify mankind’s influence on global climate change.”

But he acknowledged that climate change is causing “an increase in the number of various natural disasters: fires, floods, and so on,” adding that this “affects us directly” and vowing to “take measures to minimize the consequences of these changes.”

This is not an abstract philosophical question. Boeing forced out its CEO, Dennis Muilenburg last week. Muilenberg had played a