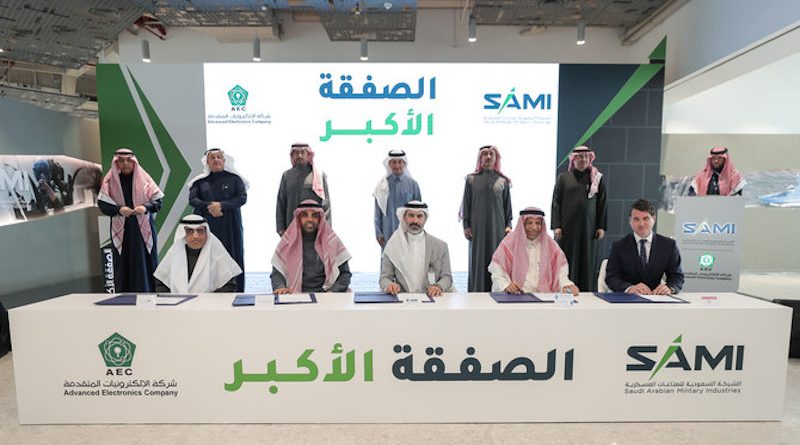 SAMI, which is a subsidiary of the Public Investment Fund (PIF), announced the deal on Monday during a ceremony attended by senior officials from the Defense Ministry, the General Authority for Military Industries and board members from both companies. (Supplied)

The purchase of the Advanced Electronics Company (AEC) is expected to be completed in the first quarter of 2021 following regulatory approvals.

SAMI, which is a subsidiary of the Public Investment Fund (PIF), announced the deal on Monday during a ceremony attended by senior officials from the Defense Ministry, the General Authority for Military Industries and board members from both companies.

“AEC is considered the ‘crown jewel’ of Saudi Arabia’s military industries and a proud accomplishment for its citizens, and will bring about transformative change in the Kingdom’s defense sector,” SAMI chairman Ahmed Al-Khateeb was quoted as saying by the Saudi Press Agency.

He added that, with the collective efforts of SAMI and AEC, the acquisition would shape the future of the domestic defense ecosystem and have a long-lasting impact on the national economy in the coming years.

The deal is in line with Saudi Arabia’s Vision 2030 reform plan to localize over 50 percent of military equipment spending. Currently around 85 percent of AEC’s employees are Saudi nationals, including 500 engineers.

It also supports SAMI’s strategic plan to expand its business and enter the defense electronics sector.

AEC has been a core part of the Saudi government’s bid to localize the Kingdom’s military manufacturing sector.

AEC has had a record in the military industry since 1988. It has over 100 strategic partners and successfully completed more than 1,000 projects.

“SAMI’s acquisition of AEC stock will help us reach our goals and strategic plans for the next five years,” said AEC CEO Abdulaziz Al-Duailej.

SAMI has been leading Saudi Arabia’s efforts in developing self-sufficient defense capabilities through its portfolio of military products and services and across its business divisions: Aeronautics, land systems, weapons and missiles, defense electronics, and emerging technologies.

In an interview with Al-Ekhbariya TV on Monday, Al-Khateeb pointed out that Saudi Arabia is the third-largest military spending nation in the world, spending over $20 billion every year for the purchase, acquisition, maintenance and operation of defence systems.

“Since electronic industries occupy around 30 to 40 percent of the cost of any defence system or deal, this means the market is very large in the Kingdom and the world and this deal comes as a pivotal step to achieve SAMI’s strategic goals in accordance with the Kingdom’s vision,” he said.