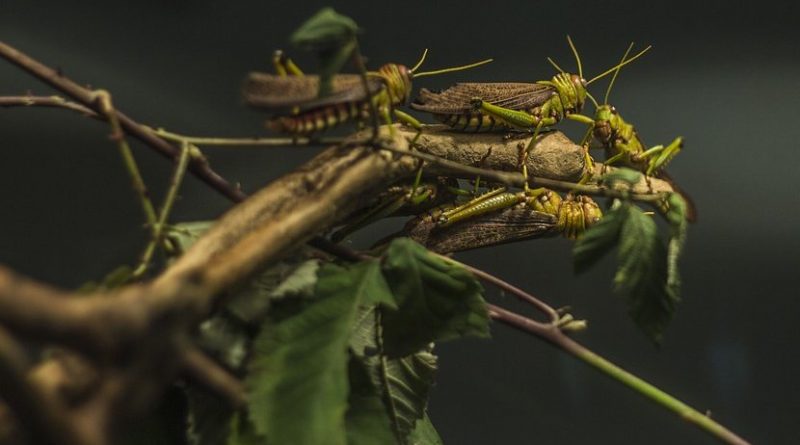 We tend to think of insects and bugs with the words “harmful “and “pests” unaware that worldwide, just a little bit of fraction, no more than 20 percent of all insects, cause harm to humans or damage crops.

There are far more of the insect population that can help in many ways and benefit mankind enormously.

Insects are one of the many components of an agroecosystem and many entomologists, people who study insects, say humans are not fully aware of the huge diversity of insect species, especially in farms, and their functions in the ecosystem.

The intensification of agricultural production is the main reason why many insect species have become pests, environmental horticulturist Laura Anne Sanagorsky of the University of Florida says.

How? The agricultural scientist explains, through co-evolutionary process driven by reduction of biodiversity (monocropping) and conventional agricultural production. The former provides perfect environment for one or few insect species to thrive and the latter help drive the evolutionary selection of new populations of phytophageous species as the use of pesticides and inorganic fertilizers give rise to insect populations that are tolerant and resistant.

In short, Sanagorsky says “we created our own insect pests”.

The increasing difficulties humans face in controlling insects is the best argument for the drastic change in the world’s agricultural system. The approach then should not only minimize the damage caused by insects but also unlearn the old approach of protecting crops by focusing on pest control and instead look at the interactions where farmers and non- farmers can benefit from the insects, she said.

She said many insects besides bees, are pollinators, others improve soil fertility while many more are parasitoids, insects that naturally kill harmful insects.

The height of agricultural pesticide use killed many beneficial insects, mostly natural enemies of harmful insects, she lamented.

Because of the absence of natural enemies, many insect pests became tolerant to some pesticides, creating a new breed of “Frankenpests” due to biological magnification, the increasing concentration of a substance, such as a toxic chemical, in the tissues of tolerant organisms at successively higher levels in a food chain, she expounded.

Helping Those That Help Us

There are ways that insects can be helped to be beneficial. This author together with Prof. N.S Talekar of the Taiwan-based World Vegetable Center or AVRDC and Prof. Eulogio Cardona and Dr. Lucy Villanueva of the Benguet State University did just that and solved one of the worst insect pest infestations in the Philippines that costs farmers millions of US dollars annually.

Working as a team for several months, we bred and reared the beneficial insects Diadegma eucerophaga and Apanteles plutellae at AVRDC’s laboratory. These insects are natural enemies of Plutella xylostella or Diamondback moth (DBM), the worst insect pest of crucifers like cabbage, brocolli, cauliflowers etc.

It solved the Diamondback infestation.

Diadegma eucerophaga and Apantele plutellae, are by God’s design, natural enemies of DBM but since they were wiped out in the Philippines due to overuse of insecticides, we had to go breed and mass rear them at the World Vegetable Center to reintroduce the population. They are parasitoids, meaning, they hunt their DBM prey, lay eggs on the bodies of their prey and their eggs hatch and feed on the prey.

“Our farmers also take care of the bush Pinon florido (Gliricidia sepium), called kakawate in the Philippines because it is host to 21 entonomophagous insects that kill 19 known deadly insect pests of vegetables,” Vasquez who is on official visit to Benguet’s vegetable fields, revealed..

“We must learn to scout insect activities in the field and set action thresholds based on regular monitoring to prevent pest outbreaks, agriculturists can train farmers to detect early pest infestation for the use of less toxic management options. We have to study and learn insects’ behavior, “ he stressed.

Frowning on deadly chemicals as the only means to control insect pests, Ligat explained,it is important to manage the presence of other insects, not destructive,to see if these can prevent destructive insects.

Tomato farmers in the United States use this approach resulting to 80 percent dependence on chemicals to rid tomato insect pests, he added.
Scientists at the World Vegetable Center say it is critical to increase plant diversity to bring back balance of destructive and beneficial pest populations. Dr. Romeo Opena who headed the Center’s Africa program said plant diversity adds stability to an ecosystem.

“The more diverse an agricultural ecosystem is, the more resistant it is to the damage caused by pests, diseases and severe weather caused by climate change”, we know that monocrops are risky in many ways, consider the Irish Potato Famine which was the result of just one clonal variety while in Bolivia and Peru, some 4,000 potato varieties are planted,” he explained.

Planting one single crop may seem most productive and beneficial but most insects prefer single specific plant host, so diversity can reduce the amount of damage they do, he added.

Diversity in crops provide more blooms at different times of the year, something that attracts more diverse population of insects.

If at all, however, we still have a long way to go to really know insects because all the time, we were busy killing them.

GDP grew at a record 33.1 percent annual rate, as the economy bounced back from the pandemic-driven shutdowns in the