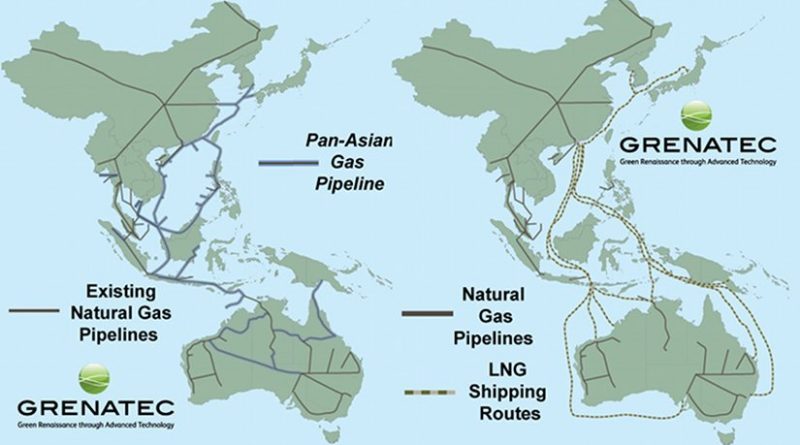 The intra-Asian LNG industry is a result of government capture by fossil fuel interests. It makes no sense on economic grounds.

LNG oversupply is creating an active Asian LNG ‘spot market’ to the horror of insiders. It’s stripping the veil from this overpriced, misinvested industry.

A painful economic process of adjustment now has several years (and bankruptcies) to run. It won’t be pretty. It could have been avoided.

Applying proper economics from the start, an intra-Asia LNG industry wouldn’t have taken root. The reason is that natural gas pipelines are better, cheaper and longer-lasting.

Proper application of ‘demand-pull’ economics would have shown this. The LNG industry instead sought ‘supply-push’ economic rents through technological ‘lock in.’ The bet’s gone bad.

Third, adding carbon prices to LNG’s ‘life-cycle’ emissions raises costs dramatically. Faced with this, the LNG industry merely excluded carbon emissions (and their costs) as irrelevant. They won’t be irrelevant for long.

In the next five years, global carbon market reform will deliver broader coverage and much higher prices (to $20-$50 per tonne). These will expose LNG’s poor carbon economics.

Fourth, capital costs of pipelines are lower than for LNG. For intra-regional transport of natural gas, pipelines represent a better deal on both economic and technology grounds. Government capture– however — tilted decisions toward more LNG, a more lucrative business for industry.

That bet’s now going wrong. The result is an albatross industry. The evidence: an oversupplied regional Asian LNG market where spot market prices have fallen so low they now more than offset financial penalties of failing to honor long-term delivery contracts.

That, in turn, is rapidly breaking down the industry’s preferred sinecure of long-term pricing.

It’s the horror scenario for LNG insiders who deliberately excluded key variables from their economic analysis. These include carbon pricing and the advantageous multi-fuel advantages of pipelines.

The current mayhem will mark the evolution of a regional LNG spot market priced on ‘demand pull’ signals generated by consumers instead of ‘supply-push’ factors favoring producers. That’s the market Asia should have gotten all along.

In response, some LNG shipping capacity and upstream natural gas production will be mothballed. This is already happening in Australia’s overbuilt LNG export port of Gladstone, Queensland.

Billions in write downs will follow over time, revising downward future calculations about the intra-Asian LNG market’s economic value. That will lead to consideration of alternative delivery methods for natural gas that are less capital and carbon intensive.

The problem is one of vertical integration. LNG producers mine the gas, build the LNG shipping facilities and LNG ships. They’ve bet the farm on everything going right with all three all the time.

By contrast, an open-access, common-carrier, multi-fuel pipeline would be built, operated and maintained by an unrelated middle party. Financing of natural gas transport would be divorced from the economics of upstream production and downstream sale.

A pipeline would sell access to all comers, changing transport prices in response to market demand. The example here is the United States. There, an open-access, common-carrier merchant pipeline network is open to all comers.

It features its own ‘spot’ market price (aka the Henry Hub) quoted on a day-to-day, moment-to-moment basis.

The future of global energy markets lies in networks such as this. They have proved themselves in telecommunications (the internet), electricity (Europe’s increasingly integrated grids) and now natural gas (the US merchant pipeline system).

Furthermore, ‘just in time’ inventory management lowers the albatross of idled, high-fixed cost investments — such as long construction lead time LNG facilities that are under utilized once finished. The only winners of that game are construction contractors.

This generates much better price signals than 20-year lock in, the model favored by the LNG industry on the grounds such certainty is required to justify large initial investment.

This article was published at Grenatec and reprinted with permission

One thought on “Asia’s LNG Market Breaking Down, Reform Comes Next – Analysis”