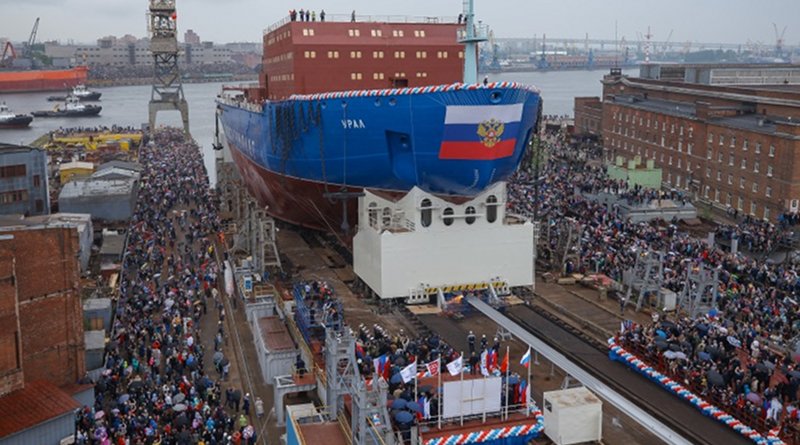 The Ural icebreaker is launched into the sea (Image: Rosatom)

A ceremony was held on 25 May at the Baltic Shipyard in Saint Petersburg to mark the launch of the Ural nuclear-powered icebreaker. The 173 metre-long Ural is one of three vessels of Project 22220 – featuring RITM-200 reactors – that will be able to break through 3-meter-thick ice as they escort vessels across the Arctic Ocean.

State nuclear corporation Rosatom said that, with the launch, it has “completed another step towards ensuring all-year round navigability of the Northern Sea Route (NSR).”

Ural and its sister ships Arktika and Sibir are third-generation ‘universal’ LK-60 icebreakers that are being built as dual-draught (8.55 or 10.5m) wide-beam (34 m) ships of 25,450 dwt or 33,540 dwt with ballast, able to handle 3 m of ice. They each have two RITM-200 reactors of 175 MWt each, delivering 60 MW at the propellers via twin turbine-generators and three motors.

Rosatom said ballast tanks inside the vessel’s hull can be adjusted easily to alter the ship’s draught depending on whether the vessel needs to navigate the Arctic sea or shallow river estuaries. “With this smart design solution, Rosatom is essentially getting two types of ice breakers for the price of one, representing a potential cost saving of hundreds of millions of dollars.”

Commenting on the ceremonial launch, Rosatom Director General Alexey Likhachov said: “The Ural together with its sisters are central to our strategic project of opening the NSR to all-year activity.”

“We also plan to add two more project 22220 ships to our nuclear icebreaker fleet by 2027,” Likhachov added. “The contract for construction of these icebreakers is expected to be signed by the end of this August”.

A more powerful LC-110 icebreaker of 110 MW net and 55,600 dwt is planned to be capable of breaking through ice up to 4.5 m thick. The first of this design of vessel will be Leader.

Rosatom said it will invest RUB734.9 billion (USD11.4 Billion) over six years to develop NSR infrastructure. Up to one-third of that – RUB274 billion – will be provided from the government budget. The remaining two-thirds will be funded by investors, including Rosatom, Rosneft and Novatek and others, who are interested in transporting cargo along the Arctic sea route.