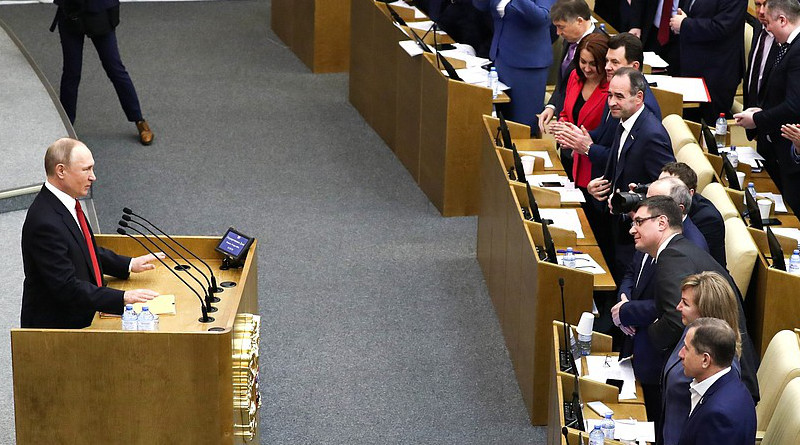 The right to vote is one of the indicators of democracy. Referendums are the best way for the public to express its opinion on any matter. At the moment, Russia is preparing to vote on constitutional amendments, the essence of which lie in the possibility that current President Vladimir Putin could remain in his post for two additional terms. It is up to the public to decide whether they want this to happen, but could there be a situation where the public decides one thing, but the voting results show something entirely different? Sadly, the answer is yes. In order for us to understand the present and to forecast the future, we have to look back at the past.

What was voting like during Soviet times? Quite simple – demonstrations or some sort of festive events were held and were attended by more than 99% of the population, according to statistical data. The voting itself was simple too, i.e. there was only one name on the ballot, therefore the expected result was always achieved – it was that easy.

Nowadays, it is a bit more complex. Firstly, even the most devoted Putin’s supporters wouldn’t believe a turnout of 99%. Secondly, the events taking place in Russia make it impossible to speak of such a unanimous support for the supreme leader of the nation. What’s the solution? We already know the recipe.

First, you have to create some commotion so that some people decide to cast their vote out of sheer patriotism. This is much simpler with soldiers – they will just be taken to polling stations and told how to vote along with warnings of what will happen if they decide to disobey. What about the rest? Just throw an event to raise the self-assurance of the nation and ignore the fact that mass events are banned in Russia. Then, maintain this self-assurance until the 1 July when the voting is to take place – that’s it! The formulation of the question should also be easy to understand, because after long celebrations people tend to become tired and confused. No details are required, just give a simple “yes” or “no” for all of the amendments at once. If someone will want to express support for a single amendment out of the whole package, it is likely they will just vote yes for the whole thing.

However, the situation is a bit different, but the solution lies in the cornerstone of Soviet ideology – falsifying data.

Not a lot of people will argue that this is difficult to do, because all of the registries and documents concerning the vote are in the hands of the rulers. You simply have to fill them out with the appropriate numbers. This is just an assumption, but something stops being an assumption when it is backed by facts.

Initially, I thought it will be difficult for an outsider to gather facts about the unlawfulness of elections in Russia. I thought so because I believed Putin doesn’t consider Russians complete idiots to act so blatantly. But it turns out I was wrong. I feel sorry for the suffering Russian nation that is forced to live under the rule of the people currently in power. I will give only a couple of examples of how Russians are being cheated with election results.

Russian citizen Aleksandr Bondarev, who resides in Latvia, was invited to the show Melu teorija on the Latvian channel TV3. He was a member of the election commission during two voting processes.

The first were the gubernatorial elections in St. Petersburg in 2014, and the second were the State Duma elections that took place last year.

“Already in the middle of the election day I was given a bunch of documents, something about receiving money or salaries. And among these papers was a blank election protocol that didn’t contain any numbers but had the signatures of the other members of the election commission. I refused to sign it. After the election, we counted the votes – we counted them fairly. But on the next day when the commission published the election results, I saw completely different numbers,” Bondarev revealed.1

“By Saturday evening, the campaign “I did not vote!” in Ingushetia was able to collect 45,248 complaints from citizens of the republic over the age of 18 stating that they did not take part in the State Duma elections held on 2 December. This means that at least 28% of those eligible to vote did not cast their vote, while the official voting data state that the turnout of the election in the Republic of Ingushetia was 98%.”2

It is, of course, possible that an eager member of the election commission or a group at a single polling station was attempting to achieve the result they believed was right, but if this was the case at several polling stations the only explanation is that the government is falsifying election results in order to achieve their desired outcome.

There is no doubt that Putin’s eagerness to remain president for life is too great. That is why we can expect falsification of results in the upcoming referendum to be even greater. What about actually wanting to know the opinion of the public? Forget about it – Putin has never cared for the opinion of the public and never will, because there is nothing more important than remaining in power while most Russians suffer from famine.

Home » Results Of Russia’s Constitutional Vote Are Clear: Putin Will Continue To Lie And Steal – OpEd