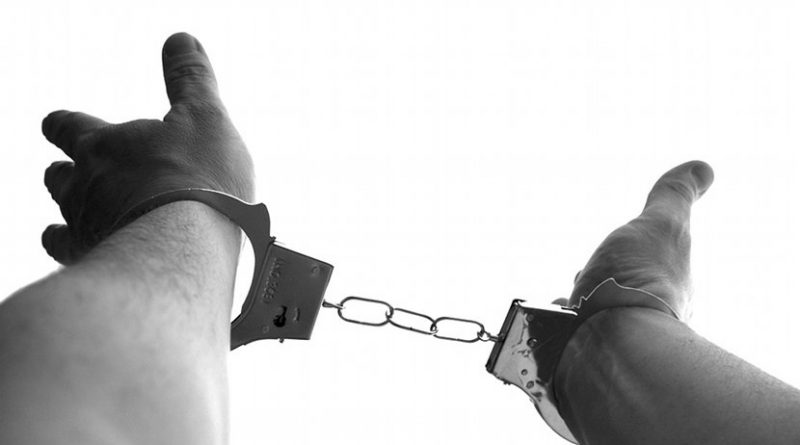 We have become one nation under house arrest.

You think we’re any different from the Kentucky couple fitted out with ankle monitoring bracelets and forced to quarantine at home?

Consider what happened to Elizabeth and Isaiah Linscott.

Elizabeth took a precautionary diagnostic COVID-19 test before traveling to visit her parents and grandparents in Michigan. It came back positive: Elizabeth was asymptomatic for the novel coronavirus but had no symptoms. Her husband and infant daughter tested negative for the virus.

Now in a country where freedom actually means something, the Linscotts would have the right to determine for themselves how to proceed responsibly, but in the American Police State, we’ve only got as much freedom as the government allows.

That’s not saying much.

Indeed, it’s a dangerous time for anyone who still clings to the idea that freedom means the right to think for yourself and act responsibly according to your best judgment.

In that regard, the Linscotts are a little old-school in their thinking. When Elizabeth was asked to sign a self-quarantine order agreeing to check in daily with the health department and not to travel anywhere without prior approval, she refused.

“I shouldn’t have to ask for consent because I’m an adult who can make that decision. And as a citizen of the United States of America, that is my right to make that decision without having to disclose that to somebody else,” said Elizabeth. “So, no, I wouldn’t wear a mask. I would do everything that I could to make sure that I wouldn’t come in contact with other people because of the fear that’s spreading with this. But no, I would have just stayed home, take care of my child.”

Instead of signing the blanket statement, Elizabeth submitted her own written declaration:

I will do my best to stay home, as I do every other time I get sick. But I cannot comply to having to call the public health department everytime that I need to go out and do something. It’s my right and freedoms to go where I please and not have to answer to anyone for it. There is no pandemic and with a survival rate of 99.9998% I’m fine. I will continue to avoid the elderly, just like PRIOR guidelines state, try to stay home, get rest, get medicine, and get better. I decline.

A few days after being informed that Elizabeth’s case was being escalated and referred to law enforcement, the Linscotts reportedly found their home surrounded by multiple government vehicles, government personnel and the county sheriff armed with a court order and ankle monitors.

“We didn’t rob a store,” Linscott said. “We didn’t steal something. We didn’t hit and run. We didn’t do anything wrong.”

That’s the point, of course.

In an age of overcriminalization—when the law is wielded like a hammer to force compliance to the government’s dictates whatever they might be—you don’t have to do anything wrong to be fined, arrested or subjected to raids and seizures and surveillance.

Watch and see: just as it did in China, this pandemic is about to afford the government the perfect excuse for expanding its surveillance and data collection powers at our expense.

On a daily basis, Americans are already relinquishing (in many cases, voluntarily) the most intimate details of who we are—their biological makeup, our genetic blueprints, and our biometrics (facial characteristics and structure, fingerprints, iris scans, etc.)—in order to navigate an increasingly technologically-enabled world.

COVID-19, however, takes the surveillance state to the next level.

There’s already been talk of mass testing for COVID-19 antibodies, screening checkpoints, contact tracing, immunity passports to allow those who have recovered from the virus to move around more freely, and snitch tip lines for reporting “rule breakers” to the authorities.

As the United States begins reopening its economy, some state officials are weighing whether house arrest monitoring technology – including ankle bracelets or location-tracking apps – could be used to police quarantines imposed on coronavirus carriers. But while the tech has been used sporadically for U.S. quarantine enforcement over the past few weeks, large scale rollouts have so far been held back by a big legal question: Can officials impose electronic monitoring without an offense or a court order?

More to the point, as the head of one tech company asked, “Can you actually constitutionally monitor someone who’s innocent? It’s uncharted territory.”

Except this isn’t exactly uncharted territory, is it?

It follows much the same pattern as every other state of emergency in recent years—legitimate or manufactured—that has empowered the government to add to its arsenal of technologies and powers.

The war on terror, the war on drugs, the war on illegal immigration, asset forfeiture schemes, road safety schemes, school safety schemes, eminent domain: all of these programs started out as legitimate responses to pressing concerns and have since become weapons of compliance and control in the police state’s hands.

It doesn’t even matter what the nature of the crisis might be—civil unrest, the national emergencies, “unforeseen economic collapse, loss of functioning political and legal order, purposeful domestic resistance or insurgency, pervasive public health emergencies, and catastrophic natural and human disasters”—as long as it allows the government to justify all manner of government tyranny in the so-called name of national security.

It’s hard to know who to trust anymore.

Certainly, in this highly partisan age, when everything from the COVID-19 pandemic to police brutality to football is being recast in light of one’s political leanings, it can be incredibly difficult to separate what constitutes a genuine safety concern versus what is hyper-politicized propaganda.

Take the mask mandates, for example.

Currently, 19 states have not issued mask mandates in response to rising COVID-19 infection numbers. More than 30 states have enacted some form of mask requirement. A growing number of retailers, including Walmart, Target and CVS,  are also joining the mask mandate bandwagon. Georgia’s governor, in a challenge to mask requirements by local governing bodies, filed a lawsuit challenging Atlanta’s dictate that masks be worn within city limits.

In some states, such as Indiana, where masks are required but there are no penalties for non-compliance, government officials are urging people to protect themselves but not to get into confrontations over masks or turn into snitches.

In other states, such as Virginia, the Nanny State is using more strong-handed tactics to force compliance with mask mandates, including the threat of fines, jail time, surprise inspections of businesses, and complaint hotlines that encourage citizens to snitch on each other. Officials in Las Vegas deployed 100 “compliance ambassadors” to help educate and enhance enforcement of the state’s mask mandate. One couple in Knoxville, Tenn., took mask-shaming to new heights when they created a Facebook page to track compliance by businesses, employees and customers.

In Miami, “residents now risk a legal penalty if they venture into public without a face mask. The city has assigned at least 39 police officers to make sure that residents are following the city’s mandatory mask ordinance. Offenders will be warned but, if they refuse to comply, they will be fined. The first offense will cost $100 and the second another $100. With a third — God forbid — the offender will be arrested.”

These conflicting and, in some cases, heavy-handed approaches to a pandemic that has locked down the nation for close to six months is turning this health crisis into an unnecessarily politicized, bureaucratic tug-of-war with no clear-cut winners to be found.

Certainly, this is not the first crisis to pit security concerns against freedom principles.

Failing to read the fine print on such devil’s bargains, “we the people” find ourselves repeatedly on the losing end as the government uses each crisis as a means of expanding its powers at taxpayer expense.

Whatever these mask mandates might be—authoritarian strong-arm tactics or health necessities to prevent further spread of the virus—they have thus far proven to be uphill legal battles for those hoping to challenge them in the courts as unconstitutional restrictions on their right to liberty, bodily autonomy, privacy and health.

In fact, Florida courts have upheld the mask ordinances, ruling that they do not infringe on constitutional rights and that “there is no reasonable expectation of privacy as to whether one covers their nose and mouth in public places, which are the only places to which the mask ordinance applies.”

Declaring that there is no constitutional right to infect others, Circuit Court Judge John Kastrenakes concluded that “the right to be ‘free from governmental intrusion’ does not automatically or completely shield an individual’s conduct from regulation.” Moreover, wrote Kastrenakes, constitutional rights and the ideals of limited government “do not absolve a citizen from the real-world consequences of their individual choices, or otherwise allow them to wholly skirt their social obligation to their fellow Americans or to society as a whole. This is particularly true when one’s individual choices can result in drastic, costly, and sometimes deadly, consequences to others.”

These court decisions take their cue from a 1905 U.S. Supreme Court decision in Jacobson v. Massachusetts in which the Court upheld the authority of states to enforce compulsory vaccination laws.

In other words, the courts have concluded that the government has a compelling interest in requiring masks to fight COVID-19 infections that overrides individual freedoms.

Generally, the government has to show a so-called compelling state interest before it can override certain critical rights such as free speech, assembly, press, privacy, search and seizure, etc. Most of the time, the government lacks that compelling state interest, but it still manages to violate those rights, setting itself up for legal battles further down the road.

We can spend time debating the mask mandates. However, criticizing those who rightly fear these restrictions to be a slippery slope to further police state tactics will not restore the freedoms that have been willingly sacrificed on the altar of national security by Americans of all political stripes over the years.

As I’ve warned, this is a test to see how whether the Constitution—and our commitment to the principles enshrined in the Bill of Rights—can survive a national crisis and true state of emergency.

It must be remembered that James Madison, the “father” of the U.S. Constitution and the Bill of Rights and the fourth president of the United States, advised that we should “take alarm at the first experiment upon our liberties.

By government, I’m not referring to one particular politician or administration but to the entire apparatus at every level that conspires to keep “we the people” fearful of one another and under virtual house arrest.

Right now, COVID-19 is the perfect excuse for the government to wreak havoc on our freedoms in the name of safety and security, but as I make clear in my book Battlefield America: The War on the American People, don’t believe for a minute that our safety is the police state’s primary concern.

Home » We Are Now One Nation Under House Arrest – OpEd