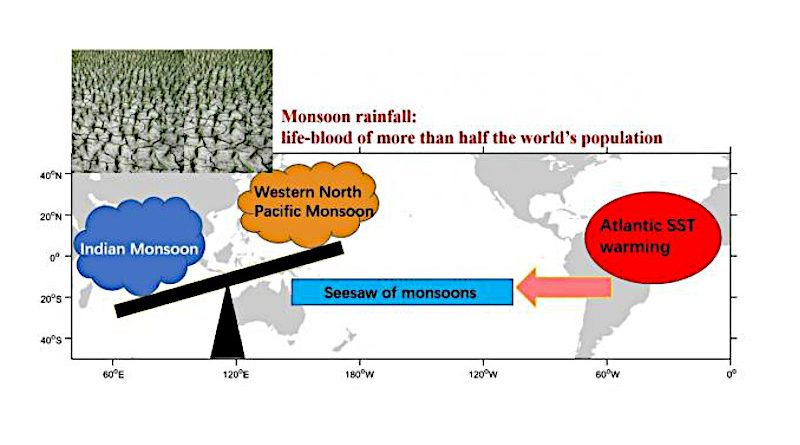 The Indian summer monsoon (ISM) and western North Pacific summer monsoon (WNPSM) are two major subcomponents of the Asian summer monsoon. The monsoon rainfall is the life-blood of more than half the world’s population. A better understanding of the ISM and WNPSM variability is of vital importance both in a socio-economic and scientific sense.

In a recent study published in Atmospheric and Oceanic Science Letters, the authors, from Guangdong Ocean University, quantitatively examined and compared the intensity of the interannual variability (IIV) of the monsoon and monsoon-ENSO biennial relationship (MEBR) for both the ISM and WNPSM.

“Our results reveal interesting multidecadal seesaw patterns of the ISM and WNPSM in terms of their IIV and MEBR, which could be triggered by the increasing influences from the tropical Atlantic Ocean,” says Dr. WANG Lei, the corresponding author of this study.

The increasing influences from the tropical Atlantic Ocean sea surface temperature (SST) could exert different influences on the ISM and WNPSM, leading to changes in opposite signs of the two monsoons in terms of IIV and MEBR. Increasing influences from the tropical Atlantic SST may be related to its persistent warming trend due to combined effects from the global warming trend and the recent phase change of the Atlantic multidecadal oscillation.

“These results imply that tropical Atlantic SST may need to be given more attention when predicting future monsoon variability of the ISM and WNPSM,” concludes Dr. WANG. “More studies are needed in the future to better understand the inter-basin interactions among the tropical Pacific, Atlantic, and Indian Ocean basins, and their interdecadal changes, which may be the key to understanding the recent climate variability.”