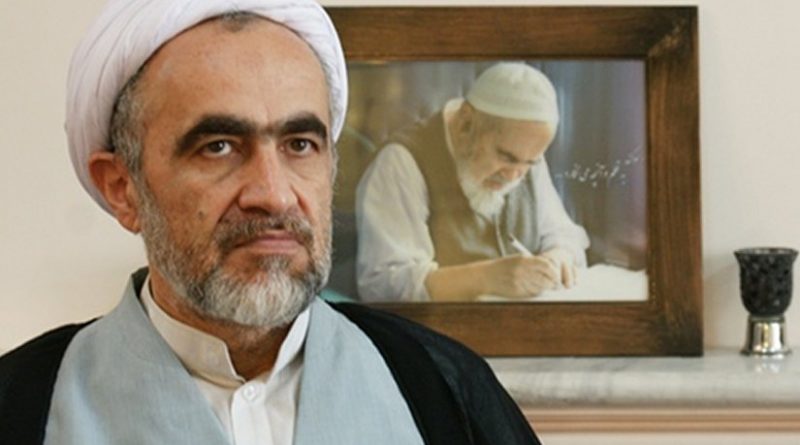 Ahmad Montazeri sits in front of a portrait picture of his late father Hossein Ali Montazeri. Photo via Radio Zamaneh.

Ahmad Montazeri the son of a high-ranking political and religious cleric has received a 21 year prison sentence for publishing an audio file belonging to his father that proves state involvement in the execution of 4000 political prisoners in Iran in the year 1988.

On 27 November 2016, Ahmad Montazeri spoke with Zamaneh Media and confirmed his sentencing to 21 years in prison. He was tried in the city of Qom where he resides and at the Special Clerical Court, as he himself is a cleric.

On 9 Aug 2016, Ahmad Montazeri, son of Hossein Ali Montazeri who passed in 2009 released an audio file for the first time revealing the conversations of the late ayatollah with a number of high ranking officials in the Islamic Republic regime that all played key roles in the mass execution of political prisoners in Iran in the year 1988. In the audio file, the late Montazeri objects to the mass killings of political prisoners and the officials each have their say on the subject: mostly apologetic, they justify the executions.

After the publishing of the audio file, Ahmad Montazeri was immediately interrogated and pressured to remove the file from his late father’s website. By the time Ahmad Montazeri was arrested, the file disseminated widely in the social media and media outlets outside of the Iran.

Ahmad Montazeri spoke with Zamaneh Media’s Freshteh Ghazi and said that the sentencing has left him astonished: “I was notified of the court’s decision today. I have 20 days to appeal the decision. The court that tried my case was headed by an honorable judge who talked to me and I think he was satisfied with the answers I gave. I was hoping for an acquittal. It took them a while to deliver judgment and I thought maybe this is a sign of acquittal. But I guess the sentence was dictated from elsewhere because the judge with the qualities I know of him could have not ruled for this sentence.”

In the text of the judgment Ahmad Montazeri’s sentence has been reduced from 21 years to 6 years in prison because his brother is a martyr. The court has also ruled that his clerical status is defrocked for disciplinary measure for three years.

Ahmed Montazeri says the reduction in his sentence is as much illegal as the sentence itself: “Which law is it that allows for 15 years reduction of a sentence for a convict based on the martyrdom of their sibling?”

Ahmad Montazeri believes that Special Clerical Court and the intelligence officials that interrogated him are trying to scare him away from publishing the rest of the files he has: “they want to prevent the release of more files and documents.”

The file that was leaked in Aug 2016 is important evidence that documents the voice of those carrying out a massacre of prisoners and captives without due process or trails. It is important because those involved with the executions are still in power and because initiatives to challenge state impunity with regards to the execution of political prisoners in 1980s Iran are ongoing.

Ahmad Montazeri says the 21 year sentence will not silence him or stop him from releasing other documents he has in his possession: “If I feel I am obligated to deliver on my duty, I will do so. It depends on the time and the conditions in the future. Maybe if I am in prison the files will be published sooner than intended.”

The court therefore decides that based on Montazeri’s interviews, his most recent speech in a memorial event for his late father, and his constant support for the Green Movement leaders he is not really sorry about the publishing of the audio file.

In 1988, over the course of two months, some estimates suggest that between four to five thousand prisoners were killed.

Ahmad Montazeri’s father because of his oppositions to these killings and the state principle of the Rule of the Jurist (Velayat-e Faqih) in IRI, was put under house arrest from 1997 to his death in 2009.

Ahmad Montazeri has released the audio file in a time that IRI still executes political prisoners in masses and without due process or a trial.