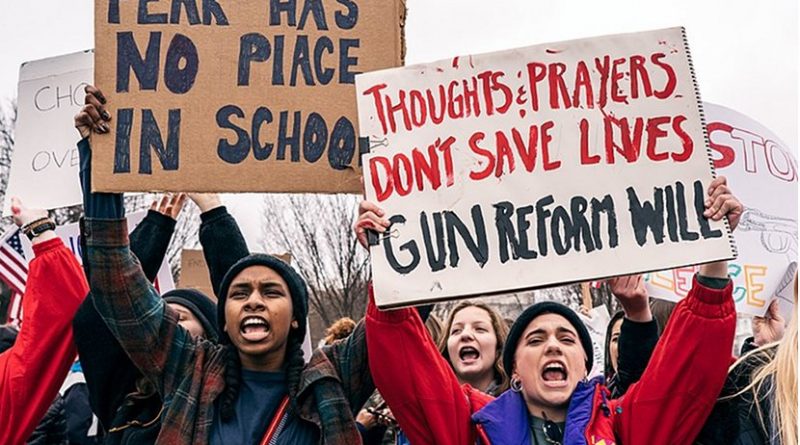 The cries of loss and anguish become public, at last. A million young people seize the truth:

“Half of my seventh grade class was affected by gun violence. My own brother was shot in the head. I am tired of being asked to calm down and be quiet.”

The stories went on and on, speaker after speaker. We marched for our lives this past Saturday. I was one of the thousands of people who endured a bitter cold morning in Chicago to be part of this emerging movement, this burst of anger, hope and healing. Violence in the United States of America is out of control. It has its claws around the lives of its own children. It’s a terrifying symptom . . . of a society built around fear, of a political structure devoted to war.

Something has to change.

The Chicago march was one of more than 800 marches throughout the U.S. and all across the world. In Washington, D.C., where possibly as many as 800,000 people joined the call for change, Emma Gonzalez — a student at Marjory Stoneman Douglas High School in Parkland, Fla. — read out the names of the 17 people shot and killed at her school last month, then stood in courageous silence for six minutes and 20 seconds: the length of time the gunman’s killing spree lasted.

Moments such as this transcend rhetoric. People’s lives matter. Their murders cannot be reduced to statistics and merely laid to rest. The cry of anguish across this planet, for all the lives that have been needlessly cut short, will reverberate for as long as necessary: until this country’s politics catches up to the will and the awareness and the suffering of its people.

The focus of the moment is tougher gun-control regulations, such as banning the sale of assault weapons. And three days after the marches, retired Supreme Court Justice John Paul Stevens (not a young person) published an op-ed in the New York Times, calling, my God, for the repeal of the Second Amendment, which he called “a relic of the 18th century.”

The marches, he wrote, “reveal the broad public support for legislation to minimize the risk of mass killings of schoolchildren and others in our society.”

I would add that they also reveal much more than that: public support, public demand, for a society that values life. This is not a simplistic demand. It is furiously complex, and pushes public policy well beyond the current status quo thinking that’s perfectly OK with a near-trillion dollar military budget, endlessly expanding wars across the planet and, uh, nuclear weapons.

This emerging movement must address the whole spectrum of violence. As Rev. John Dear put it: “That means ending gun violence — but also racism and mass incarceration but also executions, drone attacks and trillions spent for war, and so also, the ongoing U.S. bombing raids and wars and the development and threat of nuclear weapons, and our mortally sinful corporate greed and of course, the destruction of the environment and all the creatures.”

The word that ties it all together is: dehumanization.

The ability to dehumanize certain people — because of their race, their nationality, their gender, their politics, their place of work or learning — has no end. When a mass murderer does it, it’s called mental illness. When a soldier or cop or the president does it, it’s called national security.

“How,” asked Stephanie Van Hook, executive director of the Metta Center for Nonviolence, “could one forget the humanity of another and what does it tell us about who we really are?

“For insight into these questions, we might first explore the basic dynamic of conflict escalation. . . . Conflict escalates — that is, moves increasingly toward violence — according to the degree of dehumanization in the situation,” she writes, summarizing a point made by Michael Nagler in his book The Nonviolence Handbook: A Guide for Practical Action. “Violence, in other words, doesn’t occur without dehumanization.”

I believe this insight is at the core of what March for Our Lives is about. Gun regulations, even repeal of the Second Amendment, are bandages over the wound. The uncontained force behind the national murder rate is dehumanization, and as this movement grows, it must — it will — look institutional dehumanization straight in the eye.

Let me return, for a moment, to the Chicago march this past weekend. As at other recent marches — other manifestations of the national stirring — the presence of creative signage has been impossible not to notice. These signs reflect not merely the mandated slogans du jour but, far more importantly, the participants’ deep-seated frustrations and fears, which are finding public resonance.

Would you rather give up your guns or bury your children?

Others were unflinchingly political:

Grab ’em by the mid-terms

This one was my favorite:

I can vote in 10 years. Change is coming.

One thought on “Change Is Coming – OpEd”