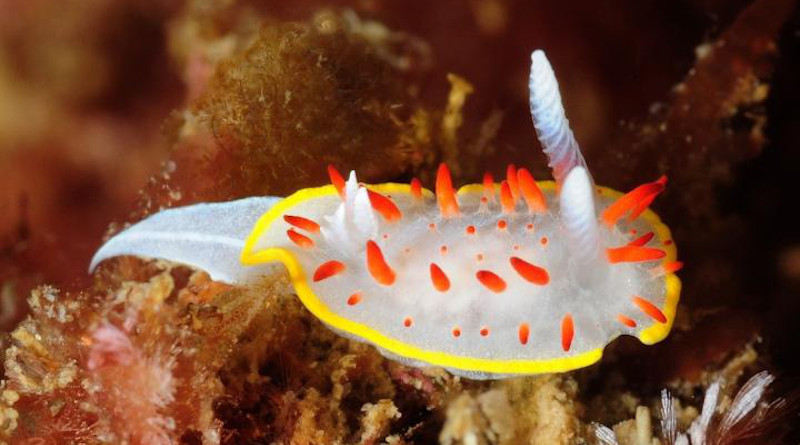 The degradation or damage of marine habitats is a global threat for the biodiversity of heterobranchia. CREDIT: Miquel Pontes, VIMAR Study Group

A study on marine biodiversity has identified seventy-three species of sea slugs in the coasts of Barcelona, an anthropized environment due to the urban metropolis.

In this group of gastropod molluscs, the most abundant in the urban coasts are sea hares, according to the article coordinated by the tenure university lecturer Manuel Ballesteros, from the Faculty of Biology and the Biodiversity Research Institute (IRBio) of the University of Barcelona.

This is one of the few ecological studies on these species in port cities in the Mediterranean and it is published in the Gazette of the Catalan Institution of Natural History (BICHN, 2020), an entity from the Institute for Catalan Studies (IEC). Other coauthors of the study are the experts Àlex Parera, from the Faculty of Biology of the UB; Miquel Pontes, from the VIMAR Study Group, and Xavier Salvador, from the Catalan Opisthobranchs Research Group (GROC).

City catalogue of opisthobranchs in the Barcelona coasts

The marine invertebrates traditionally known as opisthobranchs -nowadays heterobranchia- gather a wide group of gastheropod molluscs -nudibranchs, sea hares, sacoglossa, sea butterflies, etc. – with polyphyletic origins. These are abundant in marine areas where it is easy to find their food -usually an only species of animal or algae- and show a high biodiversity in marine ecosystems with varied habitats (rocks, sandy floors, etc.).

The degradation or damage of marine habitats is a global threat for the biodiversity of heterobranchia. The highly anthropized environments, factors such as human pressure on the natural habitat and the eutrophication of the environment by urban waste usually favour the disproportionate development of a few species. In habitats with little human pressure, the natural balance turns into a higher biodiversity and the stability of biological communities over time.

Regarding the coasts of Barcelona, “this marine habitat has been transformed by human activities, construction of walls, cement dikes, reefs, harbours and sports marinas, etc. that give new survival opportunities to animal species that couldn’t otherwise survive in their original place (like their predators). The human pressure affects negatively many fragile species -gorgonians, bryozoans, sponges-, which are the foo source of many organisms, and this conditions their presence in the marine environment”, notes the lecturer Manuel Ballesteros, from the Department of Evolutionary Biology, Ecology and Environmental Sciences of the UB.

“In some way -he continues- we could say these sea slug species have been selected by our actions on the marine environment”.

From sandy floors to harbour constructions

In general, many small-sized species and with nocturnal habitats have been found. These are associated with the fauna of habitats in rocks and reeds in the coasts of Barcelona. The most abundant ones are anaspidea -known as sea hares, they feed from algae- and cephalaspidea, which usually feed from organisms that live in the mud or sand. In the case of nudibranchs, which are mainly carnivorous, their presence in the Barcelona coast is very little and there have been only a few findings.

Many species of heterobranchia can be found in colonies of hydrozoans, gorgonians or marine sponges, that is, in places where there is a certain amount of phytoplankton and zooplankton for the nutrition of these organisms. In some cases, too much organic matter in the marine environment can cause bloom in algae and bryozoans, which is detrimental to the conservation of the biodiversity of molluscs. However, anaspidean and sacoglossa populations benefit from the growth of algae in shallow waters, conditions given in many harbour structures.

Experts identified seventy-three different species of sea slugs in the urban coast, although the ecological state of the urban waters is not good, specially in the mouths of the Besòs river and the semi-closed littoral areas like in Forum. “However, it is surprising to find many species in such an anthropized environment like beaches and the inside of the harbour and marinas of Barcelona, in a coastal line near eleven kilometres, from the Besos River to the Llobregat River”, notes Miquel Pontes.

“But we should confirm -he continues- whether these results come from a lack of previous knowledge on the presence of these gastropods or whether it is a response to an efficient colonization process of the substrates that have been artificially created in the Barcelona coasts over the last decades”.

According to the experts, the configuration of found species is different than those in other places which are better conserved, such as Medes Islands, where the scientific team has identified up to a hundred and eight different species since 2010.

“While in Barcelona we see a higher amount of specimens that eat algae, in the Medes islands we find mainly species that feed from sponges, cnidarian and bryozoans, the presence of which in Barcelona is merely anecdotic”, note Ballesteros and Pontes, co-authors with Enric Madrenas of the book Els nudibranquis del mar català (El Brau, 2019), the first field guide dedicated to more than 150 species of nudibranchs identified so far in the marine ecosystems in Catalonia.

A more and more tropical Mediterranean

Climate change is favouring the presence of exotic marine species in the Mediterranean coming from the Red Sea -through the Suez channel- or the Atlantic after having crossed the Strait of Gibraltar. In this situation, the study identifies the presence of allochthonous species -Bursatella leachii and Polycerella emertoni- in the urban marine ecosystem of Barcelona, but its ecological impact seems to be null.

“The sea hare Bursatella leachii, with a notable size and high reproductive skills, could be a problem in case there is a lot of food. However, this is not the case ye, so this is rather an interesting finding instead of a problematic one”, note the authors. According to them, this species feeds from diatoms, and does not compete against other autochthonous species of sea hares such as Aplysia punctate and Aplysia depilans, which feed from different algae species.

Another exotic species, Polycerella emertoni, is extremely small-sized and it is related to the seasonal bryozoan Amathia verticillate, an organism that usually moves the native fauna during summer, but it disappears when waters are cooler.

“In general, the Mediterranean is believed to go towards tropical conditions. If this process continues, we will have to get used to see more and more exotic species”, warn Manuel Ballesteros and Miquel Pontes.