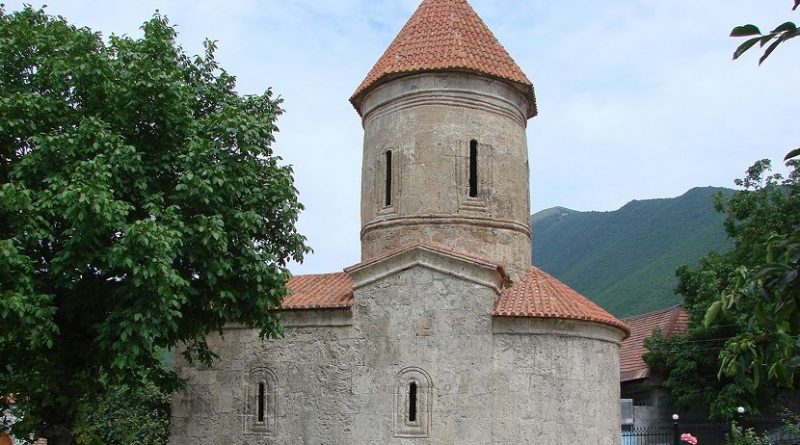 Sarkhanbay Khuduyev, a native of Shaki region and a dynamic public servant, invited us (a group of U. S. and European scholars) on behalf of the Baku International Multiculturalism Centre, to conduct a research visit in the regions of Shaki and Qabala (Qəbələ) during the weekend of October 28-29, 2017.

The region of Shaki is the birthplace of Mirza Fatali Akhundov, a famous Azerbaijani writer and philosopher who established a new period in Azerbaijani literature. [1]

The region of Shaki is located over 320 kilometers west of Baku, it is one of the ancient regions of the Republic of Azerbaijan, located in the northwestern territories of the land of fire, its people epitomize the very essence of Azerbaijani multiculturalism that is unique at international levels. The region of Shaki (Şəki – in Azerbaijani language) borders in the north with the Republic of Dagestan, Russia; it is globally unique, due to its multiculturalism values, intercultural coexistence and of its ancient religious monuments that have endured merciless historical manipulations and archeological site destructions during Russia’s Tsarist regime and Qajar Dynasty (1789–1797).

Unfortunately, historical manipulations in Shaki have continued in the years of Stalin and Nikita Khrushchev.

We left Baku on early Saturday morning, our careful driver swiftly crossed the impressive suburbs of Baku and all of a sudden we found ourselves in front of a majestic landscape on both sides of a well maintained paved road, in the outskirts of Gobustan District, where light brown Fold mountains are intertwined with Dome Mountains, making Gobustan countryside an unforgettable scenery where modern public works are intertwined with rare natural beauty.

The national paved road was winding at the very intersections of these geological works of art, that were making our trip very unique and enjoyable due to its precipitous angles and occasionally steep curves that enabled us to be introduced with Azerbaijan’s myriad of mountain ranges, observed thousands of kilometers away, thanks to spectacular clear skies. In the outskirts of Gobustan, 120 kilometers from Baku, we were greeted by two young Azerbaijani teenagers who were holding two live rabbits by their ears; their joy added a special laugh to our trip.

We stopped for breakfast in Ismailli District, at a local restaurant, where the meal was: a traditional qayǧanaq (scrambled eggs with tomato), local honey cloves, three types of locally made white cheeses and freshly baked loaves of tandir bread.

After the imposing serpentine national highway, on the western side of Ismailli District begins a belt of dense forests were imposing old trees create a natural green and orange carpet with their wide crowns and in many occasions tourists will appreciate remarkable nature’s colorful caves – that continue for miles and miles – created by these majestic trees that follow through the Qabala District (the capital of ancient Caucasian Albania), serving as a natural shield from the Sun’s beams for the tourists’ eyes. Accompanied by such a concert of colorful trees, we continued to travel through Oghuz District; home of famous Neolithic period’s archeological sites, VII Century Govur castle in Khachmaz and of many other historical Azerbaijani ancient monuments.

Oghuz District is the world’s ancient home of mountain Jews, today it has two well preserved synagogues and a thriving Jewish Community that conserves and upholds its religious rites and historic traditions.

After traveling for over five hours we arrived in Shaki, at Marxal Resort and Spa, an advanced tourism complex of high standards that certainly overshadows, surpasses many Hilton resorts worldwide.

In the late afternoon hours of Saturday, we visited the ancient Caucasian Albanian Church in the village of Kish (Kiş), where the Government of Azerbaijan is currently building a paved road that connects the city with such a unique religious and cultural site of rare international reputation. Shaki (Sheki) is also home of a Santiago Calatrava style bridge connecting the city with the village of Kish (both sides of the river); that was recently inaugurated.

For dinner we were graciously invited at the home of Sarkhanbay’s grandmother were our team could not escape from a local famous meal of şüyüdlü sǝbzi plov, a traditionally cooked yellow rice with white raisins, honey glazed apricots, topped with a delicious crusty rice pancake. Traditional Azerbaijani earl grey tea, homemade yogurt, hazelnuts, walnuts, locally grown pomegranates and apples were also a delight of this memorable visit.

During the early morning of the following day (Sunday) we visited the Khan’s Palace, located inside the walls of Shaki’s Castle, where imposing paintings in walls and ceilings (unique battle scenes, lions standing on top of large grey fishes and bright red pomegranate trees) epitomize the philosophical principles of Sun Tzu, Dante Alighieri’s Divine Comedy and illustrate the tenets of Alfred Thayer Mahan (a U.S. historian and a highly important strategist of the 1800s). The round temple of Caucasian Albania, located within the walls of the Shaki Castle, is a rare monument that brings together ancient history and revives Azerbaijan’s multiculturalism environment that is deeply rooted and provides a rather different positive perspective when compared to other countries in the region and beyond.

According to the Leader of Shaki City Executive Authority Mr. Elkhan Usubov: “Azerbaijan pays a great importance to the preservation of cultural heritage as well as promotion of the country`s rich cultural heritage across the world.”

In 2016, the region of Shaki hosted the 34th meeting of the TURKSOY Permanent Council. The conference was chaired by TURKSOY Secretary General Dusen Kaseinov.

According to Mr. Abulfas Garayev, the Azerbaijani Minister of Culture and Tourism: “throughout 2016 a number of events were held in Shaki with the support of TURKSOY; Shaki was the ‘Cultural Capital of the Turkic world.’” Shaki is a rare treasure that brings together religious tolerance, intercultural dialogue and unparalleled multiculturalism values.

As academician Prof. Dr. Kamal Abdullayev once said: “Today, Azerbaijani President Ilham Aliyev, is worthily continuing the political course of his great predecessor [HEYDAR ALIYEV], and is telling to the world; “Multiculturalism is a state policy in Azerbaijan and has no alternative!”” The year 2016 was declared by the President of Azerbaijan H. E. Mr. Ilham Aliyev, as the “Year of Multiculturalism,” it is indeed the perfect political decision aimed to preserve the rich literary works of Nizami Ganjavi, Huseyn Javid (son of Nakhchivan), Mirza Fatali Akhundzade (son of Shaki), Mirza Jalil, Abdulla Shaiq, Kamal Abdullayev and many other legendary writers of Azerbaijan. The region of Shaki may unquestionably be considered as Europe’s cultural capital, standing at the foot of Greater Caucasus Mountains, where Sunni Muslims have the highest level of education per capita in the world.