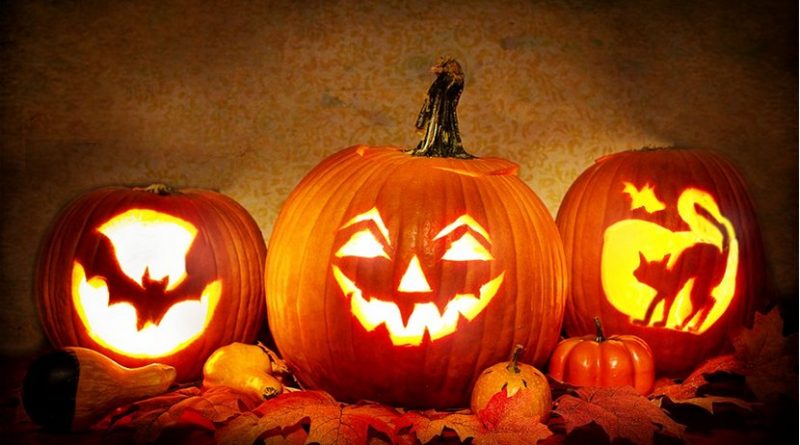 Though I have been to the USA several times, I did not take any interest on Halloween. This year it is different. That is because of my granddaughters! Their infectious enthusiasm moves me. I abandoned my taciturn attitudes to celebrations, I had assiduously followed all these years! The little ones gladly ran around while their dad carved pumpkins of different sizes and shapes. The children helped their mom to paint them bright red, blue and green;; they painted themselves as their palms carry the colors they handled. They were glad that there were no noisy admonitions this time!

In an article titled “The Halloween Pumpkin: An American History“, Stephanie Butler writes that the association of pumpkins with Halloween is a very recent phenomenon. The author quotes a poem on “eating pumpkins at morning and pumpkins at noon”, a Massachusetts settler wrote in 1630s.

According to Ms. Butler,” Modern Halloween comes from the Irish festival Samhain, an occasion that marked the passage from the summer harvest season to the dark of winter. Tradition dictated huge bonfires be built in fields, and it was believed that fairy spirits lurked in the shadows. To distract these spirits from settling into houses and farms, people would carve rudimentary faces into large turnips, and set candles inside. The turnip lanterns would rest along roadways and next to gates, to both light the way for travelers and caution any passing fairies against invading.”

Ms. Butler says that the celebration of Halloween in America did not take off until waves of immigrants from Ireland and Scotland arrived in the mid-1800s. “Pumpkins are native to North America, so while it’s not known exactly when the first pumpkin was carved and lit, the first mention of pumpkins jack o’lanterns comes at around the same time. In 1866, the children’s magazine “Harper’s Young People” reported that “a great sacrifice of pumpkins” had been made that for that year’s Halloween celebrations. Pumpkin carving grew more and more popular as the years went on. By the 1920s, Halloween had been embraced throughout the United States. Parties and costumes became the norm, and “trick or treating” soon followed in the mid-1930s.”

Giant pumpkin carving is a skilled craft now. You may see some amazing pumpkin carvings here. These activities have another side: If you are careless, they may cause injuries. Ms Victoria Forster, postdoctoral research scientist at The Hospital for Sick Children, Toronto writes in Forbes (October 28, 2018) that hospitals recorded 4,500 Halloween related injuries last year.

“The most common Halloween injuries we see are severe hand injuries from pumpkin carving and leg and extremity injuries due to falls from long costumes and/or costumes that impair vision,” Ms Forster quoted orthopedic surgeon and American Academy of Orthopedic Surgeons spokesperson Kevin G. Shea, MD.

Ms Forster lucidly gave many instances of injuries and safety tips. After listing many safety tips, the CPSC concluded thus, “Now that your costumes and decorations have been created and placed with safety in mind, don’t forget to have fun! Have a safe and spooky Halloween with your family and friends”

At www.history.com you can find the following facts on pumpkins:

Americacomes alive website, while sharing the little known facts about America’s past, explained why carved pumpkins are a symbol of Halloween. Thus:

These carved vegetables were eventually called Jack O’Lanterns by the Irish who told a legend about a farmer named Jack who made a bargain with the devil that left him wandering the earth for all time.

When the immigrants arrived in America and found a bountiful supply of pumpkins, they soon adopted the pumpkin as the best fruit (and it is a fruit!) for carving Jack O’Lanterns.”

According to the US Department of Agriculture, US harvested in 2016 about 15 million pounds of pumpkins from nearly 67,000 acres. It was worth $207.6 million. The Guardian reported that the UK would be wasting 8 million pumpkins after this Halloween, the equivalent of enough pumpkin pie to feed the entire nation.

“Almost three-fifths (58%) of consumers buy pumpkins to hollow out and carve, of whom only a third bother to cook the leftover but edible innards, according to the annual #PumpkinRescue campaign,” the daily reported

Shockingly, 51% of the buyers throw away the flesh. The daily noted that Halloween is a significant money-spinner for supermarkets and is now second to Christmas in terms of festive retail. The UK grows estimated 10m pumpkins annually, 95% of which will be hollowed out in lanterns for Halloween and the rest used in recipes.

“Some pumpkins are inedible and specified as “for ornamental use only” but the flesh of the majority is edible.” the paper added.

Mr. Alexandru Micu, the science blogger at ZMEscience.com wants everyone to fight the food waste during the Halloween. He directs us to the PumpkinRescue campaign page for some nifty suggestions and tips on how to cook our plump pumpkins.