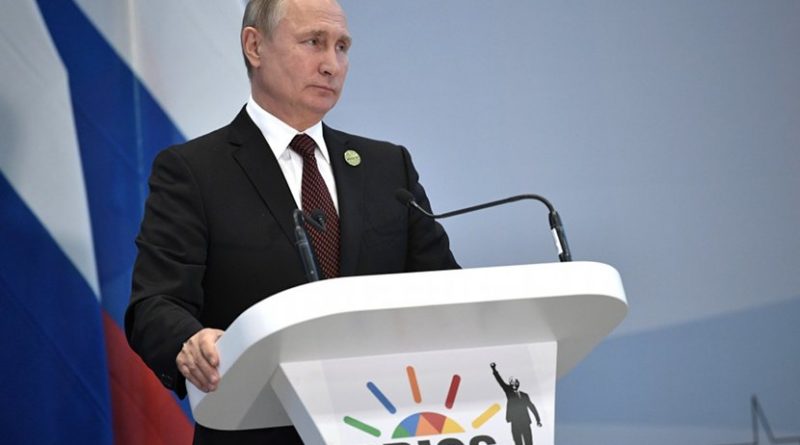 In connection with the end of Michel Temer’s tenure as Head of State, Putin expressed his gratitude for constructive cooperation and mutual understanding between the two leaders during the period of joint work, and highly praised his efforts to strengthen the strategic partnership between the two countries.

Addressing Jair Bolsonaro, the Russian leader noted that relations between Russia and Brazil are productively developing in the spirit of strategic partnership as the countries are cooperating in politics, trade, the economy, energy and culture and are coordinating their efforts in addressing important regional and global matters.

Putin reaffirmed his readiness to work together in order to build up cooperation between Russia and Brazil, both with regard to the bilateral and international agenda, including in BRICS, where Brazil will preside in 2019.

In his messages to President of the Republic of India, Ram Nath Kovind, and Prime Minister of the Republic of India, Narendra Modi, the President of Russia strongly emphasised that Russia-India relations are developing in a constructive and dynamic manner, and the agreements reached at the October summit in New Delhi contribute to strengthening privileged strategic partnership between our countries.

He expressed confidence that joint efforts will lead to further growth of mutually beneficial cooperation in various areas and greater coordination of efforts on key issues on the regional and global agenda within the UN, BRICS, the SCO, the G20 and other multilateral bodies.

He stressed the existence of an ongoing substantive political dialogue, the dynamic growth of bilateral trade, the successful launch of the reciprocal years of region-to-region cooperation and the good results of coordinating the efforts by Moscow and Beijing in addressing important regional and global issues.

He further expressed confidence that effective joint work on the bilateral and international agenda will continue in the coming year, which will mark the 70th anniversary of diplomatic relations. Putin finally wished Xi Jinping good health, happiness and every success, and the friendly Chinese people happiness and prosperity.

In his end-of-year congratulatory message to the President of the Republic of South Africa, Cyril Ramaphosa, the Russian leader stressed that Russia-South Africa relations were developing dynamically in various spheres in 2018, which was fully confirmed by the leaders’ talks in Johannesburg. “Russia and South Africa together make a significant contribution to building a fair, democratic system of international relations,” the message says.

Putin expressed confidence in the continued joint work to build up bilateral ties in the spirit of strategic partnership and effective coordination of efforts within the UN, the G20, BRICS and other multilateral organisations, which meets the core interests of the two nations and contributes to consolidating regional and global security.