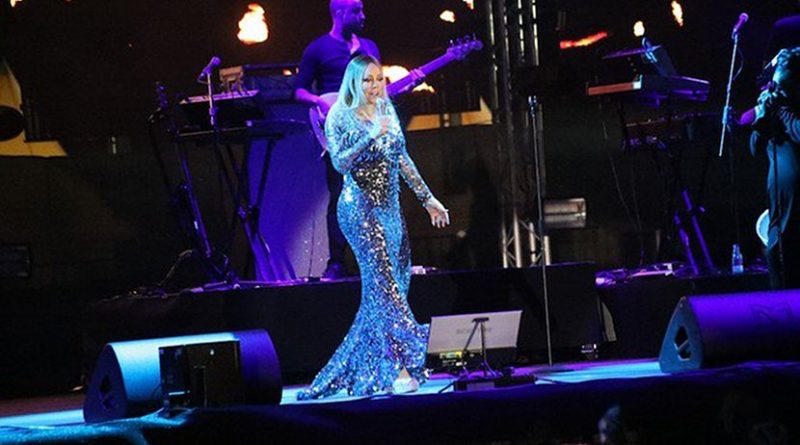 By Essam Al-Ghalib and Ben Flanagan

Mariah Carey took the stage in Saudi Arabia on Thursday to become the highest profile international artist to perform in the Kingdom since the easing of restrictions on entertainment.

“I’m so happy to see you guys all together tonight,” the superstar told an exuberant crowd at the Bay La Sun resort in King Abdullah Economic City.

She then launched into a string of her hits including “Love Takes Time,” and “Make it Happen.”

Wearing a full length black sequined dress, Carey dedicated the song “Always Be My Baby,” to the crowd.

Fans flocked to the concert to see Carey become the first female international artist to perform in the Kingdom since social reforms removed restrictions on entertainment and segregation of the sexes.

Ahead of her performance, fans told Arab News of their excitement at seeing the star on stage.

Faisal Mulla, 21, said it was his first time seeing a concert in the Kingdom.

“I’d just like to enjoy it as much as I can,” he told Arab News as he waited excitedly outside the venue.

Hundreds gathered at the event before she arrived and the mood was joyful and full of anticipation. The crowd included a mix of Saudis and foreigners, with quite a few in their 40s and above. For many it was their first concert experience.

When Carey performed one of her classic hits “Fantasy” the crowd erupted, singing along. The mixed crowd cheered and danced with many holding their smartphones in the air.

“I came to encourage more artists to come to Saudi Arabia and celebrate,” said 22 year-old Hamza Gamaraldin. “We’re all big fans of pop music and as we’re huge fans of her music, I came to support her too.”

“She’s a legend. We love Mariah and we thank her for coming to Saudi! I feel good and more encouraged about the future of Saudi Arabia, I’m encouraging it to be more improved and more open to foreigners.”

Earlier, Carey said her concert was a positive step towards the dissolution of gender segregation.

“Presented with the offer to perform for an international and mixed gender audience in Saudi Arabia, Mariah accepted the opportunity as a positive step towards the dissolution of gender segregation,” Carey’s publicists told The Associated Press.

“As the first female international artist to perform in Saudi Arabia, Mariah recognizes the cultural significance of this event and will continue to support global efforts towards equality for all,” the publicists added.

DJ Dash warmed up the crowd before Carey took to the stage while Dutch DJ Tiesto was set to perform after Carey had finished.

Ahmad, a 29 year old Lebanese man who was born and raised in Saudi Arabia, said that he was attending to see DJ Tiesto rather than Mariah Carey, and that “it’s a great performance so far, it’s just nice to see in Saudi.”

He added that it is the first time he has seen “something like this. I hope she comes again, and other artists.”

Ticket prices ranged from SR295 for the grandstand to almost SR800 for the “golden circle.”