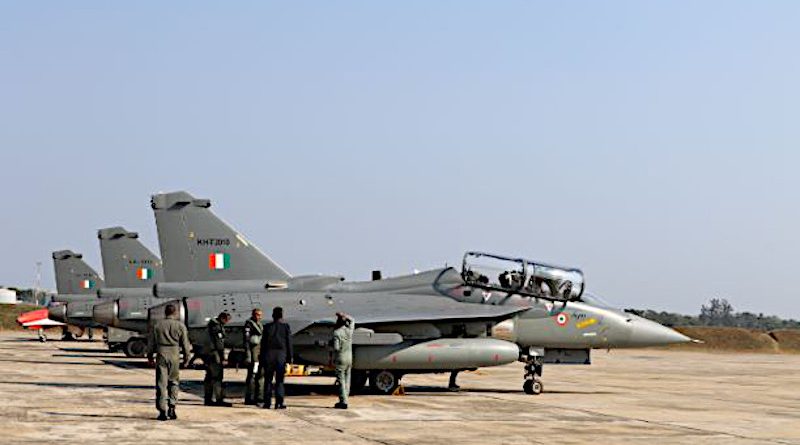 Given the competitive geo-political arena and the fact that China and Pakistan are pushing their envelops in a coordinated way, India will be displaying its air power and aircraft manufacturing abilities in Sri Lanka at the Sri Lankan Air Force’s  70th Anniversary celebrations here from Mar 3 to 5.

To commemorate the anniversary a fly past and an aerobatic display is also being organized for the first time in Sri Lanka at a grand scale at Galle Face from 03-05 Mar 2021.

The Indian High Commission said in a press release on Sunday that “as a gesture of solidarity, and in keeping with years of close interaction and camaraderie between the two countries and their militaries, the Indian Air Force (IAF) and Indian Navy will participate in the event with an Aerobatic Display by Sarang (Advance Light Helicopter), Surya Kiran (Hawks), Tejas Fighter Aircraft, Tejas Trainer and the Dornier Maritime Patrol Aircraft.”

A total of 23 aircraft of the Indian Air Force and Indian Navy would participate in the grand event .

The deployment of such wide variety and huge inventory of aircrafts and helicopters of IAF and Indian Navy is testimony to the strong bonds of friendship and close interoperability shared between the corresponding forces of India and Sri Lanka services, the High Commission added.

All the Indian aircraft on display are Made in India and as such represent the indigenous technical prowess of Indian research and development sector & reliability of products of India’s Defense Industry, the High Commission said.

There are indications that India is trying to enter the arms market in Sri Lanka. The Tejas trainer jet could be one item for sale.

“The Tejas Trainer, on display for the first time, would also afford the opportunity of independent sorties for the Sri Lanka Air Force pilots, accompanied with the Indian pilots whilst adhering to relevant strict health guidelines,” the Indian High Commission said.

Sri Lanka is ‘Priority One’ partner for India in the sphere of Defense, the High Commission said.

“The assurance of India’s fullest cooperation in the field of Defense and security was recently reiterated to Sri Lanka’s leadership by the National Security Adviser of India Mr Ajit Doval during his visit to Sri Lanka for the trilateral Maritime Security Cooperation talks among India, Sri Lanka and Maldives hosted by Sri Lanka in November 2020.”

“The participation of IAF and Indian Navy aircraft and personnel in the 70th Anniversary celebration of SLAF is indicative of the growing cooperation, camaraderie and friendship between the Armed Forces of the two nations, the High Commission said.”

The No. 5 Fighter Squadron and No. 6 Helicopter Squadron of the Sri Lanka Air Force will get their President’s Colors during the celebrations.

P. K. Balachandran is a senior Indian journalist working in Sri Lanka for local and international media and has been writing on South Asian issues for the past 21 years.