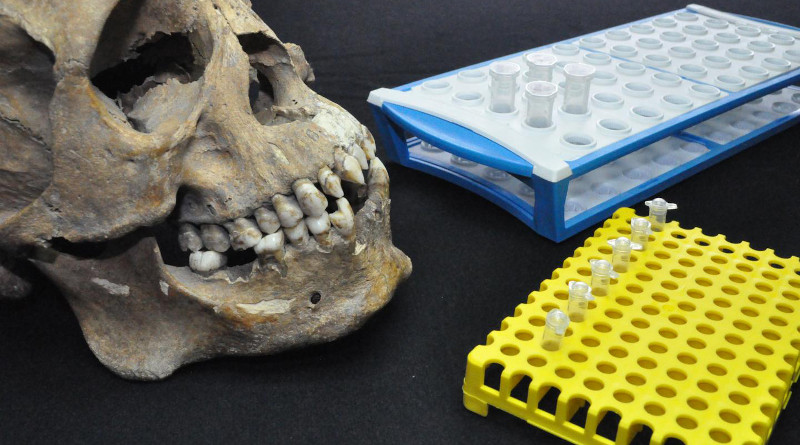 Despite the infamy of the transatlantic slave trade, scientific research has yet to fully explore the history of the enslaved Africans brought into Latin America.

In a study appearing in the journal Current Biology, scientists tell the story of three 16th century African slaves identified from a mass burial site in Mexico City. Using a combination of genetic, osteological, and isotope analyses, the scientists determined from where in Africa they were likely captured, the physical hardships they experienced as slaves, and what novel pathogens they may have carried with them across the Atlantic. This study paints a rare picture of the lives of African slaves during early Spanish colonization and how their presence may have shaped disease dynamics in the New World.

“Using a cross-disciplinary approach, we unravel the life history of three otherwise voiceless individuals who belonged to one of the most oppressed groups in the history of the Americas,” says senior author Johannes Krause, an archaeogeneticist and professor at the Max-Planck Institute for the Science of Human History.

The three individuals were found within a mass grave at San José de los Naturales Royal Hospital in Mexico City, an ancient hospital site largely devoted to servicing the indigenous community. “Having Africans in central Mexico so early during the colonial period tells us a lot about the dynamics of that time,” says first author Rodrigo Barquera (@jrockdrigo), a graduate student at the Max-Planck Institute for the Science of Human History. “And since they were found in this mass burial site, these individuals likely died in one of the first epidemic events in Mexico City.”

Researchers extracted genetic and isotope data from the individuals’ teeth, piecing together their lives before enslavement. “Their genetics suggest they were born in Africa, where they spent all of their youth. Our evidence points to either a Southern or Western African origin before being transported to the Americas,” says Barquera.

A close look at their bones revealed a life of severe hardship once they arrived in the Americas. Anthropologists found large muscle insertions in the upper body of one skeleton, likely pointing to continuous physical labor. Another individual had the remnants of gunshot wounds from copper bullets, while the third had a series of skull and leg fractures. The team could also tell, however, that the abuse did not end their lives. “Within our osteobiographies we can tell they survived the maltreatment that they received. Their story is one of difficulty but also strength, because although they suffered a lot, they persevered and were resistant to the changes forced upon them,” Barquera says.

From the remains, researchers also recovered the genetic material of two pathogens that infected two of the individuals while they were alive. “We found that one individual was infected with hepatitis B virus (HBV), while another was infected with the bacterium that causes yaws–a disease similar to syphilis,” says co-senior author Denise Kühnert, a mathematician working on the phylogeny of disease, from the Max-Planck Institute for the Science of Human History. “Our phylogenetic analyses suggest that both individuals contracted their infections before they were likely forcibly brought to Mexico.”

These are the earliest human remains in Americas in which HBV and yaws have been identified, suggesting that the slave trade may have introduced these diseases into Latin America very early into the colonial period. This is particularly meaningful for yaws, as it was rather common in Mexican people during the colonial period. “It is plausible that yaws was not only brought into the Americas through the transatlantic slave trade but may subsequently have had a considerable impact on the disease dynamics in Latin America,” says Kühnert.

By conducting science in this interdisciplinary manner, researchers are now able to answer deep questions about the roots of Mexican culture. “We want to get insights into how pathogens emerged and spread during the colonial period in the New Spain, but we also want to continue to explore the life stories of the Africans brought here and other parts of the Americas. That way they can take a more visible place in Latin American history,” says Barquera.

Home » The Story Of Three African Slaves During Spanish Colonialism, As Told By Their Bones