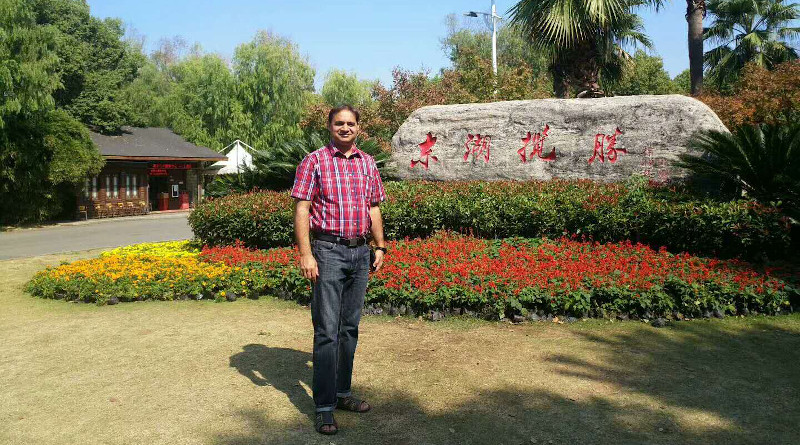 Wuhan (the city is now known as the City of Corona Virus outbreak) was once an exciting and vibrant city to visit. While living in China and enjoying the beauty of West Lake (Hangzhou) for almost 5 years, visiting Wuhan City and its East Lake was on my wish list before completing my Ph.D. Studies and leaving China.

Finally, I grabbed the opportunity in October 2018 and bought a G-train ticket which normally takes 5 hours from Hangzhou to Wuhan but in a spell of over-excitement, I messed up. I left my phone in the taxi that I took to reach the train station. While retrieving my phone, I had to miss the train and wait for the next one. Somehow, I reached there at night and thanks to my country mates (studying at Wuhan University) who picked me from the station. We had our dinner together in one of the Halal Restaurant nearby. While living in Wuhan for a couple of days, an interesting thing which I noticed for the first time was that the elevators didn’t have a number “Four (4)” in their multi-story buildings. As the number “four” (in Chinese“si四”) is nearly homophonous to the Chinese word “si 死“for “Death”, so the number is considered to be unlucky.

Although the language barriers combined with limited English language internet applications sometimes make it hard to find the best things in an area. But, there are so many attractions worth seeing for food lovers and shopping enthusiasts as well as the historical and serene sites surrounded by beautiful lakes. It includes a yellow crane tower, Baotong temple, Hubei provincial museum, walking/ shopping streets of Jianghan road, and the beautiful Wuhan University.

From an initial look over the map of Wuhan City, one may get the impression that each of these places in the city is never more than a stone’s throw away from a lake. The most fascinating place which always reminds me of Wuhan is the beautiful inner-city East Lake surrounded by a walking track. All the roads and walking tracks were lined with wonderful shade producing trees. Enjoying a ride on 25-30 Kilometers cycling track along the East Lake’s Greenway (called Donghu Ludao 东湖绿道) is simply amazing. During the entire ride, my inner soul was genuinely feeling the excitement and pushing me to tell the whole world that I am still a 15 years boy who has yet to explore many things.

But, the city is now famous for the novel COVID-19 outbreak and has changed the whole shape of the city. The pandemic is now under controlled and the 76 days long lockdown has finally been lifted in the Wuhan city (a populous city of 11million people). The government officials have now allowed for activities with some restrictions still intact. The deserted roads (for more than two and a half months) are again getting some traffic. The flight operations and train service have been resumed. Initially, 30 flights from Wuhan for three cities were operated and almost fifty-five thousand train passengers had made reservations for going outside the city. This was decided because many people from other cities got stuck in Wuhan due to a hasty lockdown. They finally got a chance now to go out and meet their families again. Having done this the residents are still allowed for limited movement while avoiding visiting crowded places and wearing a mask is made mandatory. All the educational institutes and some residential compartments are still closed.

According to one of the Chinese Newspapers “People’s Daily” having a zero recurrence case doesn’t mean a zero risk. As the danger still exists, therefore the citizens must be cautious of the fact that opening the doors of the city should not be taken as letting to open the doors of houses [1].

No wonder, the city sometimes referred to as “Chicago of China” by foreign sources was famous for its beauty and East Lake. But, now countries and health agencies across the world have advised that people should avoid traveling to Wuhan and the province of Hubei. As Wuhan’s most charming trait is perhaps its motto “Wuhan different every day” (in Chinese one can say Wuhan meitian bu yiyang武汉每天不一样); therefore, I am sure the beauty of Wuhan will again overweigh to erase the fear of coronavirus and attract the people around the world.

Home » Wuhan: A Tourist’s Eden, Will It Ever Be Reclaimed? – OpEd