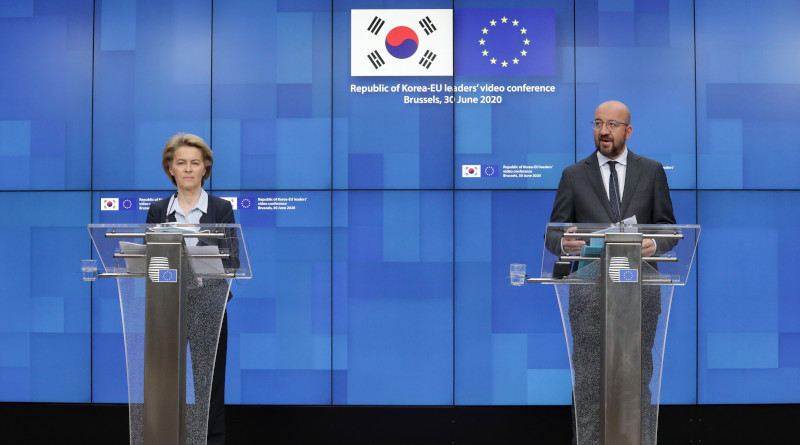 As 2020 marks the 10th anniversary of the EU-Republic of Korea strategic partnership, and this leaders meeting was partly to mark the occasion. It is hoped that a live summit in Seoul will take place as soon as circumstances allow. Both sides are keen to deepen their overall cooperation.

There was considerable agreement on all major issues as both partners are strongly committed to multilateralism and a rules-based approach to resolving global issues.

Tackling the Covid-19 pandemic was a central theme of the meeting. The leaders discussed deepening cooperation on research and development of vaccines and medicines and agreed that any COVID-19 vaccine should be a global common good. Both sides reiterated their support for the WHO and supported the goal of an impartial, independent and comprehensive evaluation of lessons learned from the pandemic. There was agreement to assist developing countries in facing the consequences of the pandemic, by means including debt relief.

[NB The EU’s ‘Coronavirus Global Response’ pledging initiative has raised over €9.8 billion, including a contribution of €45,7 million from the Republic of Korea].

There was also broad agreement on economic recovery programmes. Markets should be kept open to prevent disruptions to global supply chains. The WTO should be reformed and strengthened. The Paris Agreements should be fully implemented and the green deal should be at the centre of respective economic policies

On digital matters, leaders discussed opportunities to enhance cooperation on research and innovation, including a possible High-Level Dialogue on the digital economy. The leaders also discussed cooperation on cybersecurity and countering disinformation and hybrid threats.

They underlined their willingness to promote connectivity based on the principles of sustainability, openness, inclusiveness and a level playing field.

On the bilateral FTA, they agreed it was working well but accepted the need to remove non-tariff barriers to trade and accelerate and simplify administrative procedures. The EU also asked Korea to ratify the outstanding fundamental ILO Conventions swiftly and amend the relevant laws.

On regional security, the EU side emphasised their interest in becoming a more active actor in Asia, including in the Korean peninsula. President Michel called for the ‘complete, verifiable and irreversible’ dismantlement of all DPRK weapons of mass destruction including its ballistic missile programme.

In the press conference, the EU side condemned the new Hong Kong security law as ‘deplorable’ and in breach of the Basic Law and China’s international commitments. The EU was in touch with its partners on how to respond and expects China to face serious consequences to its reputation and interests.

The joint press release is here.