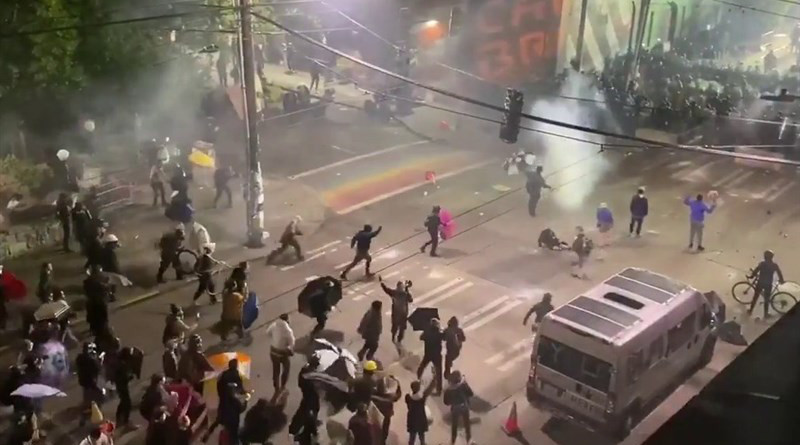 In fewer than 100 days, the world will know the US presidential election result. Will it be Donald Trump or Joe Biden? The road to election day is likely to be very ugly and filled with debate, rioting and confrontation. Even the vote itself is likely to end up at the Supreme Court. The US is set to be divided into zones along coronavirus disease (COVID-19) lines, impacting the sociopolitical fabric.

As the dividing of the country along pathogen lines occurs by state, there is the problem of the 14-day quarantine and a lack of enforcement in trying to prevent the virus’s spread. Trump’s use of a Department of Homeland Security (DHS) federal force in Portland, Oregon, illustrates the way in which civil disorder is mistakenly handled in the country at this time of great crisis and change.

No matter which way one cuts this situation, maintaining order versus human security becomes paramount. The DHS approach is basically a private military company model derived from old thinking about megacity urban operations and crowd control.

America is seething with anxiety and is deeply divided about the role of the police, the value of the Black Lives Matter movement, and the limits of federal authority in an election season.

With the Nov. 3 vote quickly approaching, are we beginning to see the US transforming into a state where federal agents, as opposed to the National Guard, flood the streets and overrule local authorities? When the DHS was formed in the wake of 9/11, it was not given the role of intervening in civil disturbances in the US; instead that went to the National Guard.

The National Guard went on overseas training missions and worked in partnership programs. The requirement for maintaining civil order on the scale now being seen by the American public has never really been addressed appropriately.

Fear and uncertainty exploded in Portland in a surreal armed conflict that has been witnessed by the whole world. This chaos then spread to other cities, from Oakland, California, to Richmond, Virginia, as the nation reeled under its division, which was augmented by the COVID-19 pandemic. The confrontations are symptomatic of how the protocols for preventing disease spread are being abandoned. The combined dangers that are now being presented feed into the political, economic and social drivers that will decide the presidential election.

The distinct COVID-19 programs being implemented at state and county level are warping the ability to effectively contain its spread. Some segments of the American aviation industry are also contributing by not taking the appropriate measures to prevent pathogen spread.

As people want to move between states, the probability that COVID-19 zoning will be established is growing. Zones that are already on the sloping downward side of the first wave of COVID-19 are much further ahead than those zones in America where rates are skyrocketing.

The division of America into these zones is a mission that should already have been considered by a range of US institutions and stakeholders. But the US election process is likely to interfere with the enforcement of physically separating those who have been exposed to COVID-19 from those who have not. Here, mail-in voting becomes critical, as is now being addressed, finally. But there will undoubtedly be voting issues, which Trump will seek to exploit.

The confrontations between Americans are now mangled by contradictory laws, accelerating demands for societal change and questions of inequality that remain unresolved. The outrage is only growing and the culminating effect in early November is potentially explosive. Unknowns still lurk in America’s immediate future, especially the economic realities of inequality. October will be burning hot as America’s competitors take advantage of the country’s pathogen-driven political divides.

At either end of the US political spectrum, which is shifting in new and hyperactive ways, fringe groups are preparing for a fiery fall, as is everybody else who is politicized, angry and demanding change in American society. These small groups of hooligans are well organized, operate autonomously and are well armed. Such protesters have studied counter-riot tactics, meaning they can operate directly against how militaries and police train for riot conditions.

Others want American society to remain frozen in time. Such arenas of America believe in its “old order,” best described as where the history of that part of the country kept old Confederate notions alive. And here lies the dilemma, of being able to see those infected zones continue to spread the pathogen among themselves, while other parts of the country will see an improvement. Will there be a day when a state needs to be forcibly guaranteed because of the ignorance of others?

The caution shown by American state and city authorities that take leadership action without risking lives will make them better off than those parts of the country where megacity-type enforcement actions are needed to stop violence and halt the pathogen. The US Constitution will be challenged one again.

Home » US On Countdown To Ugly Elections – Analysis