(EIA) — News earlier this month that a change of ownership would soon lead to the reversal of the Seaway crude oil pipeline between Texas and the U.S. Midwest sent ripples through U.S. and international crude markets, as participants anticipated an opening of new coastal markets for rising North American crude production that had long seemed landlocked.

On the surface, the impact was dramatic. The price discount of West Texas Intermediate (WTI) at Cushing, Oklahoma, relative to other grades, having dramatically widened for months, had already started to narrow before the news broke; word of the impending reversal added momentum to that trend. The narrowing of the WTI discount was particularly striking with respect to waterborne grades of similar quality, such as UK Brent or Louisiana Light Sweet (LLS).

The Brent-WTI spread fell from a near-record average of $23 per barrel (/bbl) in October to about $10/bbl on November 21, according to U.S. Energy Information Administration (EIA) calculations from Bloomberg, L.P. data. Over the same period, the LLS-WTI spread shrank from $25/bbl to $11/bbl (Figure 1). But the WTI discount to heavier, sour grades such as Mexican Maya or Ecuadorian Oriente, which prior to the 2011 bottlenecks traded at a deep discount to WTI and other light, sweet crudes, proved more resilient. The Maya-WTI spread fell by only $6/bbl, from $13/bbl in October to $7/bbl on November 21; the Oriente-WTI spread narrowed by $11/bbl. Maya’s own discount to LLS and Brent has become exceptionally small, reflecting strength across the heavy, sour crude market. Despite the quality gap between the two grades, the LLS premium to Maya has fallen to $4/bbl, from an average of $13/bbl over the last two years.

As hard as it may seem to overestimate the role of location in crude pricing, that is only part of the story. Unlike the real estate market, the oil market is not all about “location, location, location.” Quality and timing also matter. 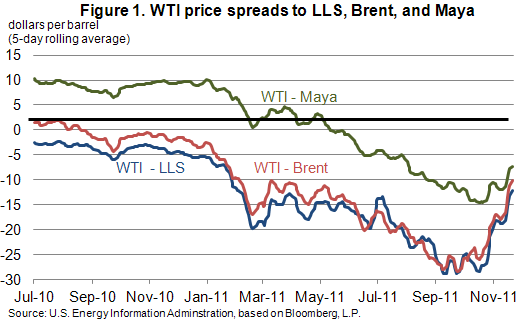 Recent commentary on the WTI discount has been rightfully focused on location and logistical issues, such as the challenge of bringing rising Canadian and North Dakotan production to market, the emergence of an oversupply of crude in the landlocked Midwestern market, and the lack of pipeline outlets to refining centers on the Gulf Coast. These supply challenges have been at the heart of the WTI “dislocation.” The planned reversal of the Seaway pipeline, with initial capacity of up to 150,000 bbl/d in the second quarter of 2012 ramping up to as much as 400,000 bbl/d a year later, is designed to help address them.

In recent weeks, however, a new trend has emerged that has less to do with bottlenecks and logistics than with demand issues. Global consumption patterns appear to be shifting away from light products, such as gasoline and naphtha, in favor of middle-of-the-barrel products, such as diesel and jet fuel. Even heavy residual fuel oil, long an unwanted byproduct of refinery production, came into relative short supply, especially in Asia. Historically, light sweet crude grades could fetch a substantial premium to heavier grades, since they naturally yield a greater share of high value light products such as gasoline. Given recent strength in distillate prices relative to gasoline, however, the price premium of these light, sweet grades has eroded compared with heavier grades (both sweet and sour), which tend to yield more products from the middle and bottom of the barrel.

The persistent discount of WTI relative to Maya fits this broader pattern which extends far beyond the United States and North America. Inland North American grades suffering from the same logistical constraints as WTI, but those crudes richer in middle distillates and heavier products, such as West Canadian Select, have fared comparatively better, having moved to an average discount to WTI of $11/bbl since the beginning of October, from $18/bbl for the first nine months of the year. Among coastal crudes, sour grades such as Mars, have been more buoyant than LLS. Beyond the United States, Russian Urals and Dubai, both sour grades usually priced at a discount to Brent, have seen that discount persistently narrow over the past month, with both trading at a small premium to Brent for most of last week. The demand-driven nature of this trend is clearly demonstrated in crack spreads, or the difference between crude and product prices. In Singapore, as in the United States, distillate and residual oil crack spreads have been strong, but gasoline cracks appear to have moved the opposite way, spending much of November in negative territory.

Timing is also an important aspect of crude differential pricing. In this respect, the reversal of the Seaway pipeline, while it will better align supply and demand, may only briefly boost market efficiency. Even as the reversed pipeline ramps up to targeted capacity of up to 400,000 bbl/d, the EIA Short-Term Energy Outlook expects 2012 crude production to increase by 190,000 bbl/d in Canada and 300,000 bbl/d in the lower-48 U.S. states (excluding Federal Gulf of Mexico) compared with 2011, with much of this increase coming from Alberta and North Dakota. New southbound pipeline capacity may thus be offset, in time, by incremental crude supply. This leaves room for incremental transportation capacity out of Canada and the Midwest by rail, although the Seaway reversal will likely displace some marginal shipping that was occurring via truck. As pipeline transportation remains the cheapest way to ship large volumes of crude over long distances, companies will still look to add pipeline capacity from inland North America in the medium term. But since rail will likely remain part of the solution, many analysts think that rail transportation costs will keep a floor under the WTI-LLS and WTI-Brent spreads, which some industry sources estimate could be between $6/bbl and $12/bbl, but opinions vary. Should additional transport projects drag on for too long, or production increases proceed more quickly than forecasted, the recent narrowing of the WTI-LLS and WTI-Brent spread could prove relatively short lived.

Energy transportation is an increasingly critical component of energy markets and energy security. As the market becomes ever more global and interdependent, the role of logistics will be of key importance. Transportation does not, however, occur in a vacuum, but amid ever-changing market conditions. The market’s moving parts include, among others, supply sources, the regional allocation of demand, and the quality make-up of the demand barrel – i.e., the type and quality of products that are most in demand at any given time, and thus of the crude grades offering maximum yields of those products. The price impact of changes in transportation infrastructure will therefore vary over time based on the availability of alternate supply and changes in demand patterns.

The U.S. average retail price of regular gasoline fell to the lowest price since February after shedding six cents to reach $3.31 per gallon. The average price is $0.45 per gallon higher than last year at this time. The national average gasoline price has fallen in 10 of the last 12 weeks. The Midwest had the biggest decrease as prices in the region tumbled more than eight cents per gallon. All of the other major regions declined between five to six cents per gallon. The West Coast had the highest regional price at $3.65 per gallon, while the Gulf Coast average was the lowest at $3.11 per gallon.

The national average diesel price fell for the first time in three weeks, losing almost five cents to hit $3.96 per gallon. The diesel price is $0.80 per gallon higher than last year at this time. Diesel prices were down across all the regions with the biggest decrease coming in the Midwest, where the diesel price was more than six cents below week’s average. The decrease in the Rocky Mountain region followed with the average price dropping a nickel. The Gulf Coast price decreased four cents while the West Coast average dropped almost five cents to $4.14 per gallon, still the highest regional price in the country. The East Coast diesel price held the most ground on the week, shedding only three cents versus last week.