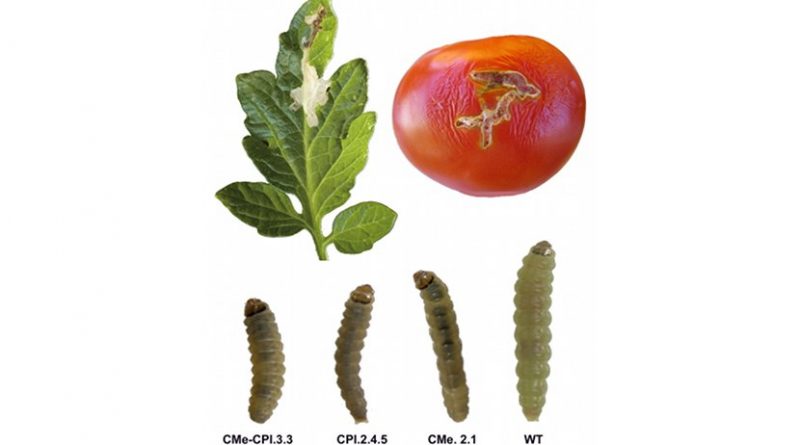 Researchers have been able to create tomatoes with increased resistance to Tuta absoluta insects, which are responsible for the destruction of swathes of crops worldwide

Researchers at the Plant Molecular and Celular Biology Institute (IBMCP), a joint venture of the Universitat Politècnica de València and the Spanish National Research Council (CSIC), has performed a study that shows how genetically modified tomato plants have increased resistance towards Tuta absoluta insect plagues. The project’s results have been published in the BMC Plant Biology magazine.

Plants are sessile plants – they are born, grow and die in the same spot. As they don’t have the ability to move when under attack, their evolution has provided them with great genetic variety, allowing the plants to overcome different stress conditions. Nonetheless, an estimated 40% of the worldwide annual production of these crops is lost to plagues and pathogens, and 13% to insects.

Luis Cañas, researcher of the CSIC at the IBMCP, explained that “the miner insect Tuta absoluta has become one of the main plagues that threaten tomato plantations across the world, and without the appropriate management it can cause losses of between 80% and 100% of their production. To face this threat we have to fortify the plant’s defense arsenal, and one of the alternatives being studied is giving the plants, through genetic engineering, defensive genes from phylogenetically distant species such as the protease inhibitors present in barley.”

José Pío Beltrán, research professor at the CSIC and also at the IBMCP, said that, “in this project the in vivo effect of a serine proteinase inhibitor (BTI-CMe) and a cysteine proteinase inhibitor (Hv-CPI2) have been investigated, isolated from the barley plant, on the Tuta absoluta insect. In order to do so we have tested both inhibitors separately as well as together in transgenic tomato plants. The Tuta absoluta larvae which were fed the double transgenic plants showed noticeable weight loss. Moreover, only 56% of the larvae reached their adult stage. Those that were reaching their adult phase had wing deformities and fertility reduction.

The effect on the insect’s digestive enzymes when ingesting proteinase inhibitors has also been studied.”

“The results of our work show a decrease in larvae trypsin activity. Proteinase inhibitors in transgenic tomato plants attracted species of the Tuta absoluta predatory insects such as the Nesidiocoris tenuis, but did not have an effect on them. We also studied whether the defensive mechanisms of the plants would activate on transgenic tomatoes. Curiously, the release of barley cystatin benefitted the plant’s defense, including the proteinase 2 inhibitor gene (Pin2), endogenous to the tomato, and which is inducible through wounding. Furthermore, transgenic plants increased their glandular trichome production and their volatile organic compound emission was altered”, Cañas added.

“Therefore, our work shows that it would be possible to simultaneously conduct integrated control, by combining transgenic crops, as well as biological control of the Tuta absoluta”, Beltrán said.

Researchers of the Valencian Institute of Agricultural Research (IVIA) also took part in the project, which is of great interest to the agricultural sector, as it proves the usefulness of the co-expression of different proteinase inhibitors for the plant’s increased resistance to plagues.