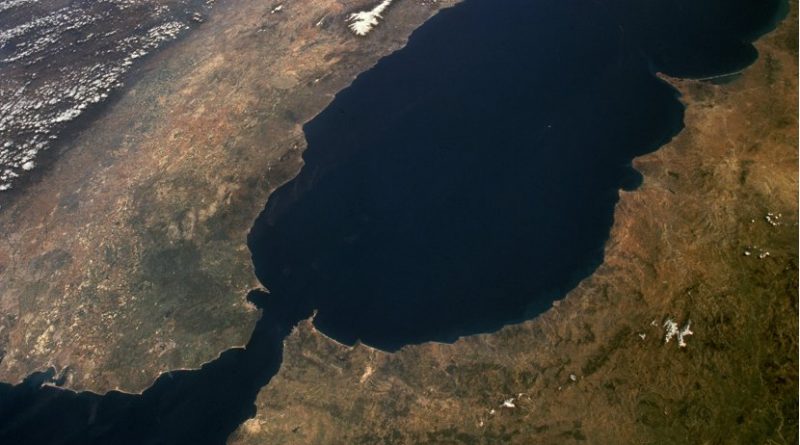 The Strait of Gibraltar as seen from space. The Iberian Peninsula is on the left and North Africa on the right. Photo Credit: NASA.

As I waited for my first Social Security check, I decided to push the envelope with swimming, a sport I had practiced for six decades. I read about the Gibraltar Crossing and realized that the idea of swimming from Spain to Morocco allayed my worries about turning 70. For me, when I am in the sea, all is well with the world.

It all started inauspiciously at the Bowman Gray pool, an ancient structure at the University of North Carolina. I was four and my swim teacher was squeezing my chest too tightly. Later that day, my mother yelled, “You bit his wrist like a damned dog. What a mean boy you are!”

At 17, as a summer volunteer in Newfoundland, I was surprised that cod fishermen were drowning from panic and water aspiration. The next day, I invited local kids to drown-proofing classes, and, by August, they were equipped to survive in freezing water. Over the years that followed, I found a hero, Lynne Cox, the author of Swimming to Antarctica and the woman who pioneered the use of swimming to “establish bridges between borders.”

The 15K Strait of Gibraltar is one of the world’s great passages, connecting the Atlantic to the Mediterranean. On one side of the Strait is Morocco and Africa and on the other is Spain and Europe. The Gibraltar Crossing is one of the Oceans Seven, a group of marathon swims that includes the English Channel. Gibraltar’s challenges include freighters, mountainous swells and gale-like winds. Spaniards Laura and Rafael Gutierrez created ACNEG (the Strait of Gibraltar Swimming Association) and assured the governments of Spain and Morocco that swimmers would be monitored and they’d have passports. I applied to ACNEG for three years, and, one day, ACNEG emailed me: “You’ll be the first swimmer in 2017. It will be cold. You have a ten-day window and during that time either the sea calms down or we cancel. But no need to worry.”

When I told my wife, Kim, that I had been accepted, she yelled, “Wow! I can throw food and water bottles to my hubbie! Yay! And I get to see Andalusian horses!”

I called Iva Anderson, a.k.a. IvaHawk, an ex-Marine pilot who humors me with Cross Fit. His curiosity awoke when I offered an air ticket: “A free trip? Hell, yeah!” I took my medical form to a University of North Carolina physician who frowned, “Forget it. Much too dangerous. I won’t be a part of this.” So I went to Duke University physician Mark Messick, an Iraq vet who decorates his office with pictures of attack helicopters. He smiled, “Sure, I see no reason not to do this.”

The ACNEG website suggests that no one can be completely prepared: “In principle…crossing the Gibraltar Strait may seem simple but many swimmers have had to abandon due to the peculiar problems of the zone (currents, winds, fog and so on). Due to this, the happy outcome of the Gibraltar Strait crossing must be accompanied by a great dose of good luck.”

I hired Anne Cleveland, a coach from San Diego whose email address begins with “Wishuponastar.” She laid out a regimen that included 10K workouts, ice baths and speed work. I found a swim partner, Lesley Fanning, a Charlestonian who was forced to abort her 2016 Crossing and wanted a second chance. Lesley shared what she had learned: “Buy the best wetsuit and sit in tubs of ice.” She and I swam through the winter at Wrightsville Beach, despite once having to rescue her kayaker/husband in 48° surf.

On another occasion, two waves collided on me and I found my nose and forehead getting pounded by the ocean’s floor.

By February, my 100-yard times eclipsed my personal records from decades earlier, but, by early March, my blood pressure rose 30%, and Cleveland warned that I was over trained.

Cleveland counseled me on how to eat, sight clearly, motivate myself while seasick and have fun. The last part seemed less attainable than the others. Then she encouraged me to start planning for an English Channel crossing in 2019. I declined to respond to this suggestion.

In the third week of March, 2017, we flew to Spain and took buses to the wind-ravaged village of Tarifa. On March 30, Lesley and I met ACNEG’s Laura Gutierrez who told us we’d cross on the 31st, the very next day.

So, the next morning, pilot Antonio Montiel told us the three cardinal rules: “To get past shore currents there’s no eating for the first hour. If you can do so, sprint your butts off. Stay close to each other since we can’t watch you if you drift apart. Most of all, always follow the lead boat since we know the wind direction and wind speed, the currents and the dangers.”

Over the next fifteen minutes, as if by magic, the gusts heading toward the Atlantic dropped to zero, and, at a certain instant, they began to move in the right direction, i.e. into the Mediterranean. The Crossing was on. I leapt ahead, happy that I was reaching for something beyond anything I’d ever attempted. Below me, sunlight spread its shafts through the green depths and I was in synch with the sea. I saw brilliantly colored fish congregating at the coastal rocks but not one sea animal appeared in the deeper waters. It was cold and whales prefer warmer seas.

During the hours that followed, towering freighters loomed above us. Three hundred go through the Strait every day. They look like boxy skyscrapers, too top heavy to do anything but roll over. The constant churning swells were so high that I lost sight of Lesley and then the lead boat. An earplug fell out and I knew one half of my brain would be give me a sense of equilibrium and the other half would make we wallow is seasickness. Knocked around by the curling breakers, I couldn’t hold the water bottles and barely sipped the electrolytes and Gu. Lesley and I swam across each other’s legs and slapped arms. Things were getting crazy.

Then Antonio yelled for us to aim for ledges straight ahead. Morocco! I slid through the waves and lunged for the black cliffs. We both touched Africa, but just to be sure, I jumped up and down until I heard the boat’s siren announcing that we’d completed a sanctioned crossing. I clambered up the boat’s ladder and vomited my breakfast of Scottish oatmeal over the side. Pilot Antonio whispered, “Drink electrolytes. Everything’s going to be ok.”

My four-hour 57-minute crossing was faster than I had hoped for and I was happy to be the fourth oldest to have crossed the Strait. My wife told me: “I learned so much in that Zodiac. Life is full of things I didn’t know existed.”

In the days that followed, I decided to postpone an English Channel crossing, since I cannot face such a regimen anytime soon. I also was so debilitated that, within two weeks, I got a nasty case of pneumonia, something that was no doubt caused by the swim and lessened resistance to infection.

As I look back, I see that swimming to Morocco is a shared adventure, dependent on training and luck. And it helps to have a team of pros like Rafael, Antonio, Anne Cleveland and IvaHawk. In the weeks that followed, both Anne Cleveland and Rafael Gutierrez, ACNEG’s founder, died of cancer. Their lives remind me that none of us knows how much time is left, but we can take advantage of every hour we have.

Home » Swimming The Strait Of Gibraltar: From Europe To Africa

Dr. Tito Craige is a history teacher at Durham Technical Community College in North Carolina. In the 1980s he wrote stories on human rights abuses in the Philippines. He also founded and directed the Farmworker School, a North Carolina program that combines literacy and self-advocacy skills. His movie, Voices of a Silent People, won the National Broadcasting Society grand prize and a story about troubled students won the prize for the best non-fiction writing in NC.

2 thoughts on “Swimming The Strait Of Gibraltar: From Europe To Africa”