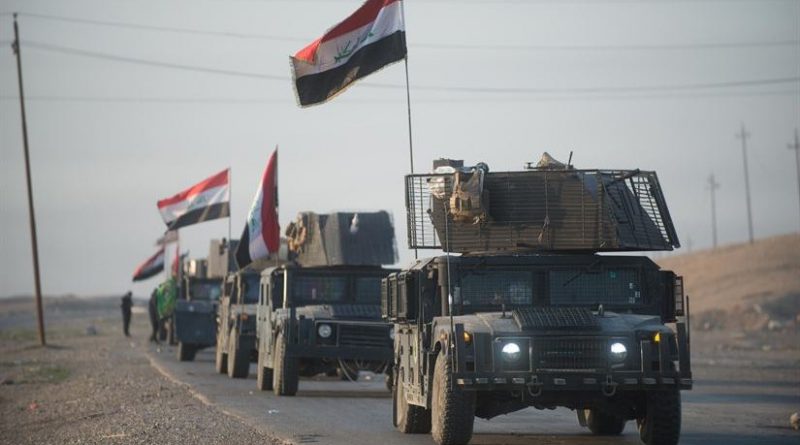 An Iraqi counterterrorism service convoy moves from Baghdad toward Mosul, Iraq, as part of the effort to liberate Mosul from the Islamic State of Iraq and Syria. Army photo by Staff Sgt. Alex Manne

The liberation of Mosul from Daesh militants should be completed in May, an Iraqi commander told local media on Sunday.

The fighting should end “in a maximum of three weeks” the army’s chief of staff, Lieutenant General Othman al-Ghanmi, told state-run newspaper al-Sabah, according to Reuters.

The commander’s comments come amid stiff resistance from the extremists in Mosul’s Old City, where an estimated 400,000 civilians remain trapped, with limited food, water and medical supplies.

Daesh have dug in among civilians, launching fierce counter-attacks on forces closing in on the Old City’s Grand al-Nuri mosque, where Daesh leader Abu Bakr al-Baghdadi made his only public appearance in July 2014 to declare himself a self-styled “caliphate” in parts of Iraq and neighbouring Syria.

On Monday, Iraqi warplanes renewed airstrikes on Daesh areas in Mosul, including the neighbourhoods of al-Rifai, al-Zanjali and 17 July, a local source told The New Arab. The number of civilian casualties from the airstrikes remains unclear.

Iraqi forces have made steady progress in west Mosul but, even with only a few hundred fighters left, the militants are expected to make a bloody last stand in the narrow streets of the Old City.

Most of the city has been liberated from Daesh since the offensive to recapture Mosul began in October.

The United Nations estimates that more than half a million civilians have fled Mosul since the offensive on the country’s second city began.

Home » Iraq: Commander Says Mosul To Be Liberated ‘In Maximum Of Three Weeks’