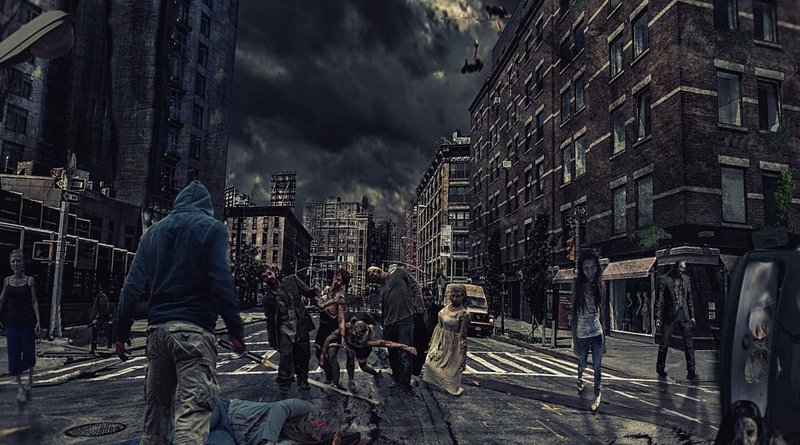 The United States was waiting for the zombie apocalypse. The country was given a coronapocalypse instead. But could the two events merge and provide the nation with a dangerous economic trend? Corporate America’s worst-kept secret had been the swelling number of zombies kept on life support and hidden away during the boom phase of the business cycle. Now that the coronavirus pandemic has exposed the fault lines underneath the economy, the zombification may accelerate due to a toxic concoction of Federal Reserve stimulus and congressional relief. Will zombies leave their graves, searching for freshly created US dollars and feasting on the carcass of the ailing marketplace?

A zombie company is a business that requires perpetual bailouts to keep its doors open, or it is a deeply indebted firm that can only repay the interest on its debt. The zombification has been eating away at Japan and China, and now it is gradually infecting the US economy. What’s worse is that American zombie businesses employ about 2 million people, according to new Arbor Data Science figures.

Workers employed by zombie companies are found in many different industries. Arbor’s research found that the top five sectors by employee headcount were:

But could the fragility of the market cause a huge number of workers to file for unemployment benefits? It might seem counterintuitive, but it has become a lot easier for these businesses to be resuscitated.

One institution has been supplying these walkers with brain nourishment: the Federal Reserve.

Zombies have been finding it easier to borrow for a combination of reasons. The first is that interest rates are historically low, so it can be less difficult to repay the interest on the debt and use the cost savings to keep the lights on. The second is that the US central bank has taken unprecedented action by acquiring corporate debt through the secondary exchange-traded fund (ETF) market.

Put simply, if it were not for accommodative monetary policy, these firms would have otherwise shut down by now. Once again, the Eccles Building is refusing to allow the invisible hand to rein in the excess for fear a liquidity crisis, credit crunch, and every other fancy way of saying we are in a dilly of a pickle.

But it is the entire market that is taking advantage of a desperate Fed. US companies are borrowing at the fastest pace in history year-to-date, issuing more than $1 trillion in new bonds, according to Bank of America Global. This is about double the number from 2019 during the same period. This eyebrow-raising number highlights two important facts in this environment: Companies are borrowing more cheaply than anybody would have anticipated last year, and investors are being paid so little to fund operations in an uncertain market.

MarketWatch alluded to AutoNation as a struggling company that recently borrowed $500 million from the bond market. The national chain of car dealerships posted a $232.3 million net loss in the first quarter, but it still attracted investor interest due to its 4.4 percent yield. Under present conditions, traders know that their investment is insured, because the central bank could just swoop in and rescue a troubled asset to avoid a powder keg from going off.

And it is not just Fed chair Jerome Powell going on a bond-buying spree. There is still obviously a demand for all kinds of bonds—investment grade and junk status—and this is fueling the rise of moribund companies that are gorging on debt. The undead can roam the streets for several more years if this is the de facto monetary policy.

In Tokyo and Beijing, the typical walking dead are the banks. In the postcoronavirus economy, it is evident that the next generation of zombies will be cruise lines, retailers, and airlines. In a truly free market, these industries would eliminate a large number of companies, but because of cheap money and an accommodative Fed, that is not going to happen. Many of these businesses are also benefiting from creditors waiving or loosening previous debts, allowing some of the world’s largest organizations to reach noteworthy agreements with lenders.

This is terrible news for Main Street, because now capital is being misallocated and transferred to unproductive enterprises. Businesses—large or small—with high growth prospects may not see their visions realized, because the money is going to prop up the Marriotts and Vail Resorts of the world.

With the death of small businesses potentially nigh, the entrepreneurial spirit may wither away before it even has a chance to be zombified, because it cannot access as much liquidity as the big boys.

The ramifications of these whatever-it-takes and money printer go brrr policies will only be felt in a few years, when the Fed chooses to tighten up and remove the training wheels. We have seen what happens when the Fed scales back its quantitative easing efforts: triple-digit losses on the stock market and ballooning debt-servicing payments. If this ever happens, a tidal wave of debt defaults and bankruptcies will swallow the US. Should the central bank refrain from embarking upon a prescription of tightening, a new type of economy will be born: the anti-productivity economy, comparable to Japan in the 1990s and China today. You could even make a movie out of it: Big Trouble in Little Tokyo: Dawn of the American Dead.

About the author: Andrew Moran is the Economics Correspondent at LibertyNation.com and is the author of The War on Cash. You can find more of his work at AndrewMoran.net.

Source: This article was originally published by LibertyNation.