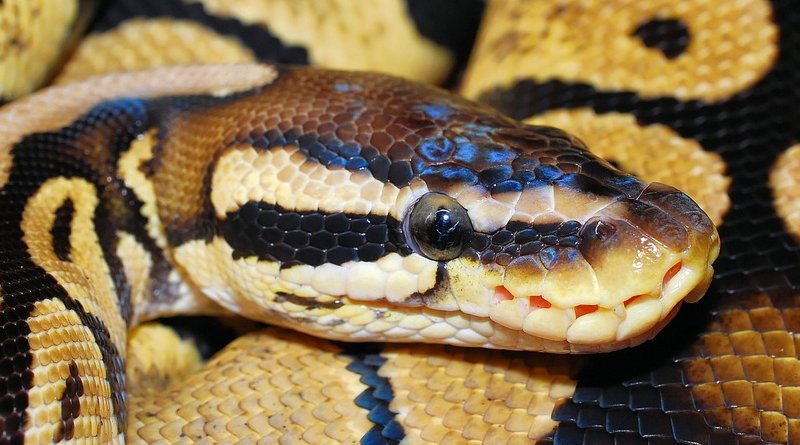 In a video, a group of young Ghanian men stride out into the bush, carrying long sticks over their shoulders. Dogs trail alongside them. When they come across a burrow, a man kneels and loosens some dirt with his stick. Then he glides his hand into the hollow, and pulls out a long black snake mottled with brown and tan patches.

The snake is a ball python (Python regius), a species named after its habit of coiling up into a ball-like shape when distressed. True to its name, the python twists up as the man lifts the snake into the air, and deposits him into a cloth bag. While the footage doesn’t show what happens next, the men will probably sell the snake to a trader, who will either keep the python for breeding purposes, or export the animal for sale overseas.

Ball pythons are the most commonly, and legally, traded live African animal under CITES, an international treaty aimed to protect endangered and threatened species. More than 3 million of these reptiles have been exported from Africa since 1975, with the majority coming from Togo, Ghana and Benin, according to a recent report by World Animal Protection (WAP). While some of these snakes are captured directly from the wild, others are “farmed” at local breeding facilities or “ranches,” then exported to countries like the U.S., Canada, U.K., Europe and China.

Ball pythons are listed as a CITES red list species under Appendix II, which, according to the treaty, “includes species not necessarily threatened with extinction, but in which trade must be controlled in order to avoid utilization incompatible with their survival.”

Richard Thomas, head of communications at TRAFFIC, an NGO that monitors the wildlife trade, told Mongabay that the CITES listing means that any country exporting ball pythons needs a permit, and that issuing authorities must be “confident the export won’t be detrimental to the survival of the species.”

“If the pythons are live, there are welfare considerations that must be met,” Thomas said. “Depending where the shipment is heading it may or may not need an import permit. Put simply, any shipment needs an export permit.”

Cassandra Koenen, an exotic pet expert and head of wildlife campaigns at WAP, says the trade is poorly regulated, especially when it comes to the process of ranching ball pythons. It appears that some ranchers do not accurately report their farming methods, management practices or the extent to which they depend upon wild-caught pythons, she said. On top of that, there’s often a discrepancy between official CITES trade data and the numbers of pythons being funneled through local ranches.

Mortality is high during the capture and transport process, but these particulars are not being documented.

“It is very difficult to acquire any meaningful or substantiated numbers for exactly how many pythons die during the complete trade chain from capture, to transport to breeder to being in the home,” Koenen told Mongabay. “But what we do know is that due to the sheer number of animals caught up in this trade, even a 1% mortality rate equates to over a thousand python deaths every year out of West Africa alone[RK4]  based on the number traded according to the CITES database — 100,000 per year.”

There is also a distinct lack of information on the distribution, sizes, and trends of wild ball python populations, said Neil D’Cruze, who holds a Ph.D. in herpetology and acts as the global head of wildlife research at WAP.

“Such data are an urgent priority to inform efforts to protect this species from overexploitation,” D’Cruze told Mongabay. “As to why this [lack of data] is the case, it is difficult to say for certain, but these types of initiatives can be difficult to implement, time consuming and costly to fund. That being said, traders at the top of the trade chain can make handsome profits.

Even without solid evidence, D’Cruze said there’s reason to believe that ball pythons are not doing well. In fact, he said he believes populations are plummeting.

“The main recent red flag comes from recent interviews with hunters in Togo,” D’Cruze said. “Three-quarters of 57 Togolese snake hunters who supply export facilities interviewed said they see fewer ball pythons today than five years ago. This most recent finding is in line with concerns previously raised by researchers in other countries across the natural range of this species.”

The pet trade isn’t the only thing putting ball pythons under pressure. They’re also regularly hunted for their meat and skin, and for use in traditional medicine and spiritual practices. In fact, a recent study published in Nature Conservation, which D’Cruze co-authored, found that pythons were one of the most commonly sold species for traditional medicine and spiritual rituals at markets in Togo. Vendors sold just about every part of a python, the study found, including the animal’s head, tail, tongue and bones.

If ball pythons were to completely disappear due to trapping and hunting, the local environment would suffer, D’Cruze said.

“One key … role that ball pythons play in the wild is one of pest control, specifically rodents and crop protection,” he said. “The magnitude of this benefit [of] pythons to rural communities of central and western Africa is thought to amount to millions of dollars per year.”

Gabriel Segniagbeto, a zoologist at the University of Lome, who acts as Togo’s scientific authority for CITES, said that while he shares a concern for the international trade of ball pythons, the “issue deserves to be put into perspective.”

The trade provides necessary financial support for many rural families in Togo, Segniagbeto said, and its discontinuation could have dire consequences for local people. But instead of catching pythons in the wild, Segniagbeto says that local ranches could provide a viable solution.

“One thing is certain, the breeding of the species is easy and it would be possible to help local communities to better organize production so that they can continue to generate the income that is regularly generated from this activity,” Segniagbeto told Mongabay in an email. “By considering the subject under this option, we can say that wild populations of the species can be maintained while continuing to produce individuals for international trade. However, all stakeholders, especially those responsible for wildlife export farms, including technical partners, must agree to analyze the subject in this option.

“At the present state, the populations of the species are not yet threatened,” Segniagbeto added. “However, if the current level of harvesting continues, this activity with habitat degradation will seriously threaten the species’ populations.”

But to Koenen, these farms aren’t a sustainable solution since most ranchers still capture and sell wild snakes.

Ranches may also have multiple species living in close proximity to each other, which can help spread disease, she said.

“Those animals don’t all belong together, and they’re under stress,” Koenen said. “In most cases, they’re living in deplorable conditions. These are the environments that cause diseases to leak from species to species. Even though this time, they’re not the cause of the pandemic, we really need to look at these types of environments where species are crossing that normally wouldn’t [cross] in any other environment … and in a very stressful situation.”

Koenen makes a further argument against the trade: ball pythons shouldn’t simply be treated as commodities, but as animals capable of experiencing emotions and feelings.

“There’s a belief system out there that they’re not sentient and they don’t have any emotion and they don’t feel pain, and that’s just simply not the case,” Koenen said.

There is a small, but growing body of scientific research that supports Koenen’s claim. A literature review in Animals, co-authored by D’Cruze, highlights 37 studies that assume reptiles to be capable of complex emotions and emotional states, such as anxiety, stress, excitement, fear, frustration, pain and suffering, and a further four studies that directly explore evidence that reptiles experience emotion, pleasure and anxiety.

“These findings have direct implications for how reptiles are treated in captivity, as a better understanding of their sentience is critical in providing them with the best quality of life possible,” the authors write.

With this in mind, Koenen said she believes that it is inherently cruel to keep snakes in captivity, even as a doted-on pet. An aquarium or tank, she said, is not an adequate environment for a wild animal like a ball python, even if it was born and bred in captivity, and many owners have limited understanding of how to care for their pets.

“Sometimes they get too close to the heat lamps that are in the tanks, and that causes burns,” Koenen said. “There’s not a lot of enrichment for them. In the wild, they spend a lot of time in their burrows, but they are known to climb, and they do leave their burrows to … hunt and do other things. They just can’t live their full lives in a tiny tank, no matter the best intentions I think of the owners.”

It’s estimated that between 4% and 75% of reptiles kept as pets die within the first year of ownership in the U.K., according to a WAP report.

“We understand that people love animals … but they’re kind of loving them to death,” Koenen said.

Should the trade be stopped?

Koenen said she thinks the ball python trade should completely cease, especially seeing how the wildlife trade may have triggered the COVID-19 pandemic.

“This pandemic has shown us what the true cost of … the wildlife trade, where an entire global economy is at risk, potentially because of the trade of wild animals,” she said. “Captive-bred, legal, illegal, caught from the wild, they’re not domesticated, and a non-domesticated animal doesn’t belong in our homes.”

Koenen also said that ball pythons deserve a higher level of protection under CITES, despite the lack of data supporting the species’ decline.

“The criteria they [CITES] use to judge whether an animal is at risk or not [has] a very narrow focus and doesn’t look into different environmental factors, and doesn’t allow for a cautionary approach.

On the other hand, Segniagbeto said the ball python trade should be maintained, especially since families in Togo depend upon the income.

“In my opinion, instead of thinking about suspending the trade in the species, we should rather think about providing better support to those in charge of breeding farms, but above all to local hunters to better produce specimens of the species,” Segniagbeto said. “This activity provides a livelihood for many families in local communities.

“I would like to invite the conservation community to work with us to help better organize and generate this international trade in wildlife specimens in West Africa,” he added. “We can manage this activity instead of trying to suspend it.”

*About the author: Elizabeth C. Alberts is a staff writer for Mongabay. For updates on her work, follow her on Twitter via @ECAlberts.