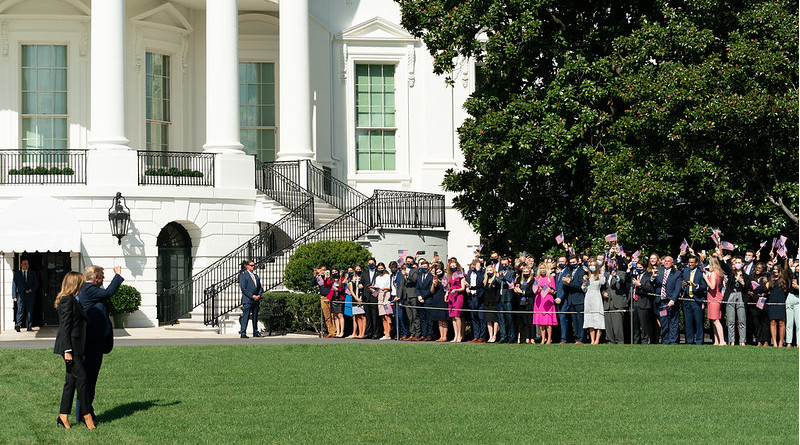 President Donald J. Trump and First Lady Melania Trump are escorted from Marine One to Air Force One at Joint Base Andrews, Md. Tuesday, Sept. 29, 2020, to begin their trip to Cleveland, Ohio. (Official White House Photo by Shealah Craighead)

U.S. President Donald Trump has announced he and first lady Melania Trump have tested positive for the coronavirus.

President Trump tweeted at 12:54 a.m. Eastern Daylight Time on Friday (04:54 UTC): “Tonight, @FLOTUS and I tested positive for COVID-19. We will begin our quarantine and recovery process immediately. We will get through this TOGETHER!”

It was not immediately clear whether they are experiencing any symptoms usually associated with COVID-19, the disease caused by the virus.

The 74-year-old president is considered to be in a higher risk category for COVID-19  because of his age and weight.

Eleven minutes later, the White House released a memorandum from the president’s physician, Dr. Sean Conley, confirming the positive tests for the Trumps.

“The President and First Lady are both well at this time, and they plan to remain at home within the White House during their convalescence,” Conley said.

He added that he expects the president “to continue carrying out his duties without disruption while recovering, and I will keep you posted on any future developments.”

Melania Trump tweeted at 1:27 a.m.: “As too many Americans have done this year, @potus & I are quarantining at home after testing positive for COVID-19. We are feeling good & I have postponed all upcoming engagements. Please be sure you are staying safe & we will all get through this together.”

All of Trump’s political events for the near future were quickly ordered canceled, according to a White House official.

The news immediately caused U.S. stock futures to plunge and potentially puts Trump’s presidential campaign into hiatus, barely a month before the election against former Vice President Joe Biden, who leads in the national polls.

Trump, who for months has played down the seriousness of the coronavirus, on Thursday evening confirmed during a telephone interview on the Fox News Channel that he and the first lady had been tested after one of his closest aides, Hope Hicks, was confirmed to be infected.

Hicks, counselor to the president, traveled with Trump to Pennsylvania for a campaign rally on Saturday, then to Cleveland for the presidential debate on Tuesday and to Minnesota for campaign events the following day.

Hicks was showing symptoms at a political rally Wednesday evening in Duluth, Minnesota, and tested positive Thursday morning, according to officials who spoke on condition of not being named.

Trump on Thursday, however, along with some top officials flew to New Jersey for a political fundraising event where he was in close contact with dozens of other people.

During the telephone interview with Fox News show host Sean Hannity, the president suggested Hicks could have contracted the virus from members of the military or law enforcement.

Over 7 million US infections, 200k deaths

There are more than 34 million COVID-19 cases around the world and more than 1 million deaths from the illness, according to Johns Hopkins University data.