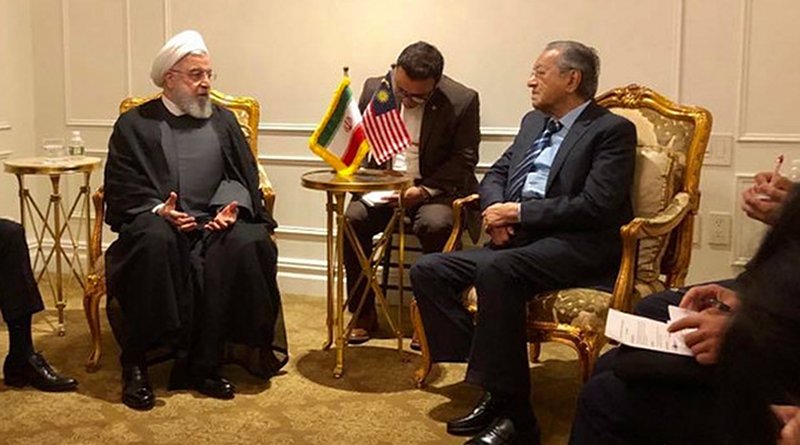 Malaysia began closing bank accounts of Iranian residents and companies because of “some very strong pressures from certain quarters,” Prime Minister Mahathir Mohamad said Wednesday amid reports that U.S. sanctions against Tehran were causing such actions.

“We are forced to do it because if we don’t, they will close our banks abroad. It’s a kind of bullying by very powerful people,” Mahathir told reporters in Putrajaya.

“We have good ties with Iran but we face some very strong pressures from certain quarters which you may guess, and it’s very difficult because we received threats about closing our banks abroad,” Mahathir said.

The prime minister was responding to a report by Reuters that nearly a dozen Iranian people had told the news agency that their Malaysian bank accounts had been closed.

CIMB and RHB Bank had notified the Iranians that their accounts were due to be closed. While bank officials did not state reasons for closing the accounts, some of the Iranians who spoke to Reuters said the move was attributed to tighter scrutiny following U.S. sanctions imposed last year.

Officials at both banks did not immediately respond Wednesday to requests from BenarNews for comment.

Just days before his visit, Defense Minister Mohamed Sabu said Malaysia was holding discussions with Iran and other countries about the possibility of using palm oil to pay for weapons as the country seeks to beef up its defense capabilities.

At the time that the United States re-imposed sanctions in November 2018, the Treasury Department said they would be the toughest ever imposed on Iran and would affect critical industries such as energy, shipping, shipbuilding and finance.

The move coincided with the U.S. withdrawal from a landmark 2015 nuclear agreement, which lifted sanctions on Iran in exchange for measures aimed at stopping the country from buying materials that could be used for nuclear weapons.

Total Malaysia trade with Iran was valued at nearly 2.5 billion ringgit (U.S. $600 million) in the 10 months leading to January 2019, according to Iranian media reports two months later. The trade balance was in Iran’s favor, which exported natural gas liquids, non-alloy iron/steel ingots and bitumen while it imported palm oil, machinery and natural rubber.

In March, Sigal Mandelker, the U.S. under-secretary of Treasury for Terrorism and Financial Intelligence, visited Malaysia and Singapore to warn against any involvement in schemes to evade sanctions against Iran.

“It’s very important that these countries have important visibility into the different ways the Iranian regime uses to deceive the international community in connection with the shipment of oil,” she said.

On Wednesday, the U.S. State Department did not respond immediately to a request for comment on Mahathir’s statement about the bank account closures or Reuters’ reporting.