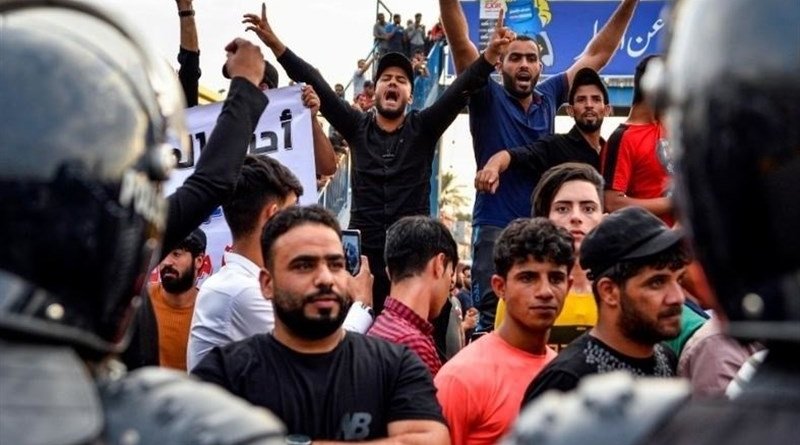 Baghdad and nine southern Shiite-dominated provinces have been witnessing mass demonstrations since Oct. 1 as people protest over corruption, unemployment and lack of daily basic life services.

Iraqi Prime Minister Adel Abdul-Mahdi and his Iranian-backed allies led a brutal crackdown on demonstrations in its first week, killing around 150 protesters and wounding 7,000 others.

The demonstrations stopped for two weeks but returned last Friday after Abdul Mahdi vowed under local and international pressure not to use live ammunition. Despite this commitment, more than 250 demonstrators were killed and more than 6,000 wounded, mostly in Baghdad and Basra.

Most demonstrators in Baghdad and Basra were killed by tear gas canisters, while in the other provinces by gunfire of guards of political parties and armed factions, whose headquarters had come under attack from protesters.

Demonstrators’ demands increased to include the overthrow of the government and early national parliamentary elections preceded by a change in the election law and the appointment of a new election commission.

Iraqi political forces and armed factions backed by Iran would be the biggest losers if the demands of the demonstrators are met, top senior officials and politicians said.

Sistani is the leader of the world’s Shiite community and is the most influential man in Iraq, considered the godfather of the political process since 2003. Although there are many religious and sectarian points that he and Khamenei share, Sistani does not adopt the theory of velayat-e faqih and does not recognize absolute right of the clergy to control the state.

The two men have been at odds over managing the situation in Iraq for years, but it turned into a rupture a year and a half ago, according to Sistani’s associates.

The dispute resurfaced last Wednesday, when Khamenei demanded in a public statement that the demonstrations in Iraq and Lebanon end. Many Iranian clerics have accused Iraqi demonstrators of being in the pay of Israel, America and Britain during their sermons at Friday prayers in the past few weeks.

Sistani, in an open letter read by his representative, Sayyed Ahmed Al-Safi, in Friday prayers said that no one is a guardian of the Iraqis and that no person or group or regional or international party has the right to impose their will on them or determine their choices regarding the management of their country or the reforms that they want.

“The message was earth-shattering,” a top senior Iraqi official said. “No one, especially Khamenei, expected that Sistani would announce his rejection of their intervention in this way.

“Iran threw all its weight behind Abdul Mahdi. They believe that this government is their government and they cannot allow it to fall.

“Any early election or amendment to the election law would mean losing the control of their local allies over the country, which they would not allow.

“They (the Iraqi forces backed by Iran) are currently rejecting any solutions to get out of the crisis and any activation of the constitutional procedures that can dismantle the crisis, means launching an endless cycle of violence because they they have weapons and power.”

Gen. Qasem Soleimani, the commander of Iran’s Revolutionary Guards who runs Iran’s operations in Iraq, arrived in Baghdad on Thursday and asked to meet Sistani on Saturday to discuss the latest developments and try to calm the situation between Najaf and Tehran, sources close to Sistani said.

“Sayyed Sistani’s office agreed to his request to meet,” the sources said.

“Sistani now has an interest in meeting him to tell him directly about their displeasure with Iranian positions.

“Although Sistani stopped meeting with any of Sayyed Khamenei’s envoys more than a year and a half ago, now the country’s interest requires his meeting Soleimani.

“Their groups (Iranian-backed forces) are ready to burn the country and the message must reach them clearly.

“The Iranians must take their hands off the demonstrators and curb their groups.”

Metallurgists have all kinds of ways to make a chunk of metal harder. They can bend it, twist it, run