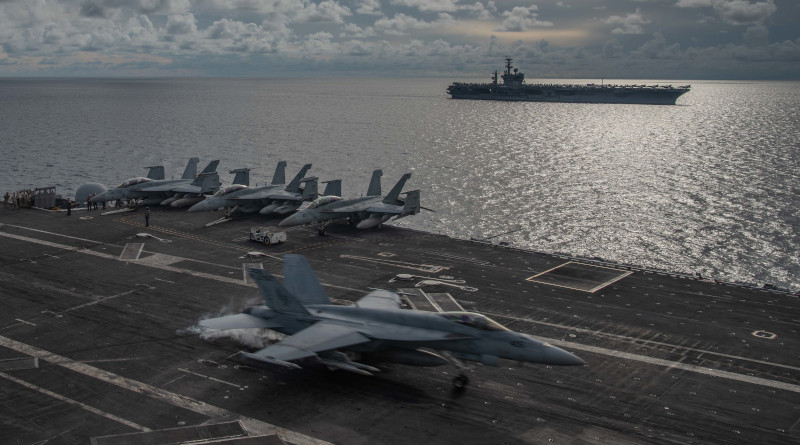 As the US-China contest for control of the South China Sea approaches kinetic conflict, many pundits are proffering reasons as to why it has come to this point. Many blame a variety of superficial disputes – over territory, maritime space, resources and the environment, and the disingenuous red herring of threats to freedom of navigation. https://www.amazon.com/Freedoms-Navigation-Asia-Pacific-Region-Strategic/dp/0367189739; https://thediplomat.com/2016/11/latest-us-fonop-in-the-south-china-sea-tilting-at-windmills/  But these are only the tip of an iceberg of dialectics that is driving this conflict.  Indeed, the reasons for this dire situation are submerged and much more fundamental.

At base is a clash of political systems—authoritarian communism versus democratic  capitalism- and their underlying ideology and values.  Although the U.S. hoped that China’s values and system would become more like its own, that is now recognized as unlikely and probably always was.  This dialectic is driving their desire to dominate Southeast Asia and, in particular, the South China Sea. China’s motive is primarily self defense and what it views as the rightful restoration of its sphere of influence. The U.S. wants to maintain its hegemony and the ‘international order’ which it helped build and now leads to its asymmetric benefit.

The U.S. has declared China a “strategic competitor” and a “revisionist” nation. It believes that it and China are engaged in “a geopolitical competition between free and repressive visions of world order” in the Indo-Pacific region. https://www.whitehouse.gov/wp-content/uploads/2017/12/NSS-Final-12-18-2017-0905-2.pdf    It has now even framed their conflict in terms of regime change saying that “the world cannot be safe until China changes”. This is a direct attack on the leadership of China–the Chinese Communist Party. https://www.express.co.uk/news/world/1316894/US-news-China-relations-Mike-Pompeo-warning-CCP-latest-South-China-Sea-Huawei; https://www.japantimes.co.jp/opinion/2020/07/29/commentary/world-commentary/u-s-china-reconciliation-drifting-away/  China believes that the U.S. wants to contain and constrain its rightful rise and thereby continue its hegemony in the region.

While China’s rationale is primarily practical –self –defense, the U.S. rationale is more ideational. Each has a strategy for achieving their conflicting goals and their strategic trajectories intersect in the South China Sea.

China is politically and militarily challenging US hegemony there and the U.S. is resisting in every way it can. For China, military domination of the South China Sea is existential.  It is protecting its historically vulnerably underbelly with an anti-access/ area denial strategy.  More important, it provides relative deep water ‘sanctuary’ for its retaliatory strike nuclear submarines based in Yulin on Hainan.  These submarines are its insurance against a first strike — something the U.S.—unlike China–has not disavowed.

Aside from defending itself against real and perceived enemies like the U.S., it has imbued in its populace the nationalistic concept that the South China Sea and its territorial features are part of the motherland and that it will defend them at all and any cost.  Backing down would erode the leadership’s legitimacy and open the door for nationalists who would accuse it of kowtowing to foreign devils.  Thus China has painted itself into a corner and has very little wiggle room to sell its populace a compromise.

The U.S. has taken upon itself the duty of preventing China from dominating the Sea using the excuse that an international arbitration panel under the auspices of the UN Convention on the Law of the Sea has deemed its claim there to be illegitimate. But the U.S. has not ratified that Treaty and has little legitimacy and credibility in enforcing it.

The real reason is probably a fear of precedent and erosion of the ‘international order’ from which it greatly benefits. South China Sea ‘expert’ Gregory Poling of the Washington –based Center for Strategic and International Studies says the reason for this rather bizarre position is that if China were to succeed, Russia might try to follow in the Arctic and Iran in the Gulf. https://www.youtube.com/watch?v=RnTeu1ZAaNo   A better analogy might be the US Monroe Doctrine and its de facto domination of the Gulf of Mexico and Caribbean.

Moreover China’s domination of the South China Sea would push the US military out of the region and shake if not shatter its ” free and open Indo-Pacific” construct that it hopes to use to form a coalition against China.

Another concern driving the U.S. is that if it does not back up its friends and allies regarding their claims, it will lose credibility not only in the region but in the world.  This is a dilemma of its own making.  It has painted itself into a corner with its friends and allies. On 13 June 2020 US Secretary of State Mike Pompeo’s vowed that “We will support countries – – who recognize that China has violated their legal territorial claims and maritime claims as well _ _ _.  We will use all the tools we can _ _ _.” That presumably includes threat of use of force if necessary. https://www.lawfareblog.com/growing-risk-inadvertent-escalation-between-washington-and-beijing

If claimants ask for its help and it does not respond as expected, its credibility in the region will take a major hit.  However, the U.S. has more domestic waffle room than China because many Americans would be reluctant to support yet another overseas adventure for vague or fallacious concepts like a “Free and Open Indo-Pacific or Freedom of Navigation.

These are some of the fundamental forces driving the looming conflict.  The U.S. has a ramped up its military posture in the South China Sea to show it means business. China has responded in kind and more—both diplomatically and militarily, and the contest for the hearts and minds of Southeast Asian countries has reached a new level of intensity.

As kinetic conflict looms, the U.S. needs to decide what it really wants and why, what it is willing to pay to get it, and if it is too much, re-evaluate and adjust its goals.  Is it willing to spend blood and increasingly dwindling treasure to continue to militarily dominate a Sea and region that is not directly critical to its national security? Will its populace support yet another pursuit of vague goals in a foreign conflict half way around the world?  Before confronting China militarily and risking war, it needs to explain to the war-weary American public why this particular endeavor is worthy of its support. Indeed, leadership of both nations owes a clear and realistic explanation of why their people should support a potentially cataclysmic conflict that would significantly set back humanity including themselves.

Vague expositions on concepts and values, and citing of superficial and derivative concerns are unlikely to satisfy. Moreover they distract from the fundamental core issues that are unlikely to be resolved anytime soon.

Home » The US, China And South China Sea: What Really Drives The Conflict – Analysis

One thought on “The US, China And South China Sea: What Really Drives The Conflict – Analysis”