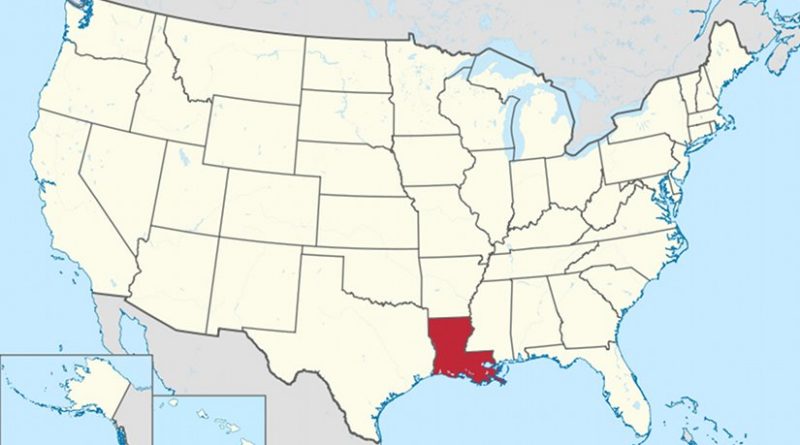 Location of Louisiana in the United States. Credit: Wikipedia Commons.

Workers have been evacuated from a Louisiana Dow Chemical Plant after a “burp” of chlorine gas is suspected to have leaked out of the plant. Authorities are telling residents to avoid the LA-1 highway as the winds push the cloud west.

Residents have noticed a “strong odor in the area around the plant” according to WBRZ. No injuries have been reported.

North and southbound traffic has been blocked on the LA-1 except for emergency vehicles. Officials told WAFB that HAZMAT has not been requested at this time.

Iberville Parish Sheriff Brett Stassi said that he received reports of a chlorine leak. He also explained that the black clouds coming from the plant were not chlorine but the plant’s turbine failure resulted in hydrocarbon burning plant.
He has no plans for an immediate evacuation but recommended that residents remain indoors with their windows closed.

The fire ball that was released from the plant was actually a flare that occurs normally during shutdowns, WAFB reported.

The DOW Chemical Plant is one of the largest in the Plaquemine Parish area and one of the biggest petrochemical facilities in the state. The plant employs 3,000 people who produce 50 products, including chlorine and polyurethane, according to the Dow’s web-site.

The plant is claiming to have had no injuries and evacuated all non-essential employees, WAFB reported.