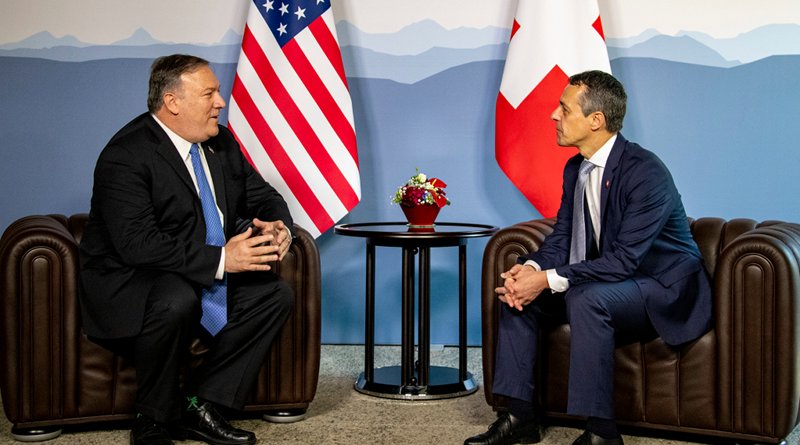 Swiss Foreign Minister Ignazio Cassis has called on the United States to facilitate the provision of humanitarian aid to Iran in a bid to de-escalate tensions between Washington and Tehran.

Cassis said he hoped the US would allow Iran the payment of food and medicine through financial transactions, despite economic sanctions imposed in a row over a nuclear deal last year.

“We want to help ensure that the civilian population, which is suffering under the new sanctions regime, is supplied with basic necessities,” Cassis is quoted in a foreign ministry statement.

He was speaking following official talks with the US Secretary of State, Mike Pompeo, on Sunday.

However, Cassis cautioned that Switzerland’s hands are tied if there is no willingness on either side to agree to talks.

Switzerland has been representing US interests in Iran for nearly 40 years and is hoping to take over a similar task with protecting power mandate in Venezuela.

Cassis also mentioned the importance of a multilateral cooperation within the United Nations.

For his part, Pompeo highlighted the role of Switzerland’s good offices as a neutral country on the world stage and stressed the importance of securing the return of missing US citizens held in Iranian prisons.

He assured the US I prepared to engage with Iran without pre-conditions about its nuclear programme but needs to see the country behaving like “a normal nation”.

The statement is seen as an attempt by Pompeo to soften his previous stance after Iran’s President Hassan Rouhani suggested Tehran was willing to hold talks if Washington showed it respect.

Both Cassis on Pompeo on Sunday stressed the strong bilateral trade ties and the long tradition of common values between Switzerland and the US.

The US secretary of state said he was optimistic about the bilateral free trade agreement and praised the potential business opportunities in Switzerland notably for the US defence industry.

On Saturday, Pompeo took part in a session of the closed-door Bilderberg conference on Lake Geneva and paid a private visit to the Swiss capital, Bern.

It was the first official visit by an US foreign minister to Switzerland in more than 20 years.

Home » Switzerland Asks US To Ease Aid Deliveries To Iran