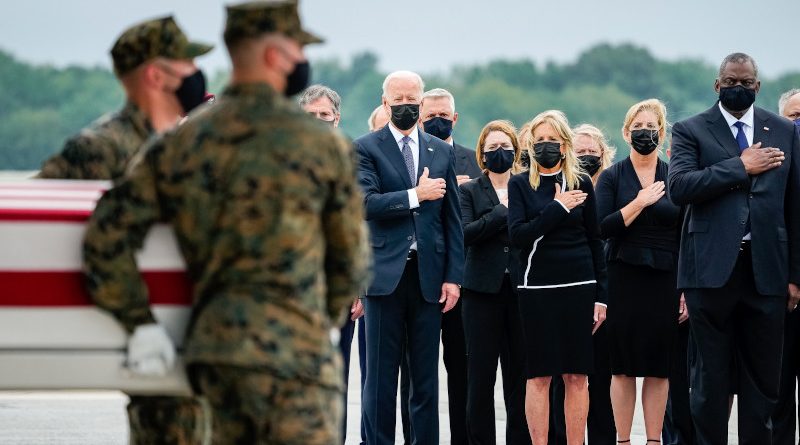 U.S. President Joe Biden and first lady Jill Biden during the transfer of the remains of US military service members who were killed by a suicide bombing at Kabul Airport, at Dover Air Force Base, Aug. 29, 2021. Photo Credit: The White House

The retreat from Afghanistan by US President Joe Biden is leading to a retreat from Washington’s ambitions of remaking the world as it reevaluates its global role and the threats of tomorrow. As Biden’s America recasts its role as the world’s policeman, the definer and defender of democracy, and the leader in the fight against terrorism, it will have to rely more on diplomacy and alliances with the “rest of the world” and less on its military prowess alone.

“As we turn the page on the foreign policy that has guided our nation the last two decades, we’ve got to learn from our mistakes,” he said in Tuesday’s speech to the nation on the end of the 20-year Afghan war.

It is a turnaround from his support for the invasion of Afghanistan as the chair of the Senate Foreign Relations Committee and the later foray into Iraq.

It is also a convergence with the policy of his Republican predecessor Donald Trump, who opposed foreign military entanglements and ridiculed nation-building while putting the spotlight on the threat from China.

“We saw a mission of counter-terrorism in Afghanistan — getting the terrorists and stopping attacks — morph into a counterinsurgency, nation-building — trying to create a democratic, cohesive, and unified Afghanistan – something that has never been done over the many centuries of Afghans’ history,” Biden conceded.

Explaining his policy shift, Biden said, “The fundamental obligation of a President, in my opinion, is to defend and protect America — not against threats of 2001, but against the threats of 2021 and tomorrow.”

For Biden the main driver of the change in his policy outlook is the realisation of the threat from China – which Trump had emphasised.

Biden said, “Here’s a critical thing to understand: The world is changing. We’re engaged in a serious competition with China. We’re dealing with the challenges on multiple fronts with Russia.”

He directly linked the retreat from Afghanistan to meeting the competition from China and Russia.

“There’s nothing China or Russia would rather have, would want more, in this competition than the United States to be bogged down another decade in Afghanistan,” he said.

The US has been debilitated by spending more than $2 trillion in Afghanistan and billions more in Iraq, while losing diplomatic focus on China and Russia.

Biden also outlined the threats in other areas like nuclear proliferation and cyberwarfare that demand attention, as well as the changed nature of terrorism, which has metastasised beyond Afghanistan since 2001.

He proposed an “unforgiving, targeted, precise strategy that goes after terror where it is today, not where it was two decades ago.”

“We face threats from al-Shabaab in Somalia; al-Qaeda affiliates in Syria and the Arabian Peninsula; and ISIS attempting to create a caliphate in Syria and Iraq, and establishing affiliates across Africa and Asia,” he said.

He vowed to continue the fight against global terrorism, but said, “We just don’t need to fight a ground war to do it. We have what’s called over-the-horizon capabilities, which means we can strike terrorists and targets without American boots on the ground – or very few, if needed.”

The hi-tech weaponry for these battles have also developed in the last two decades and Biden cited the revenge attacks last week that the US has said killed the masterminds of the Kabul attack that took the lives of 13 US soldiers.

Biden had projected himself as a great promoter of democracy and said in February, “We will work with our partners to support restoration of democracy and the rule of law, and impose consequences on those responsible” for undermining democracy.

Non-democratic China has declared it has no interest in democracy or opposing dictatorial or authoritarian trends around the world as it spreads its largesse – which is not so benign most of the time as it grips the recipients with its tentacles.

A binary approach to democracy cannot work for the US, especially when confronting China, necessitating a moderate approach.

And the US itself has a history of undermining democracy around the world when it suits it.

Following up his campaign rhetoric of promoting democracy, Biden is calling a virtual summit of leaders of the world’s democracies for “defending against authoritarianism, fighting corruption, and promoting respect for human rights.”

He said on Tuesday, “Human rights will be the center of our foreign policy. But the way to do that is not through endless military deployments, but through diplomacy, economic tools, and rallying the rest of the world for support.”

*About the author: The writer is Nonresident Fellow, SPS based in New York. The views expressed are personal