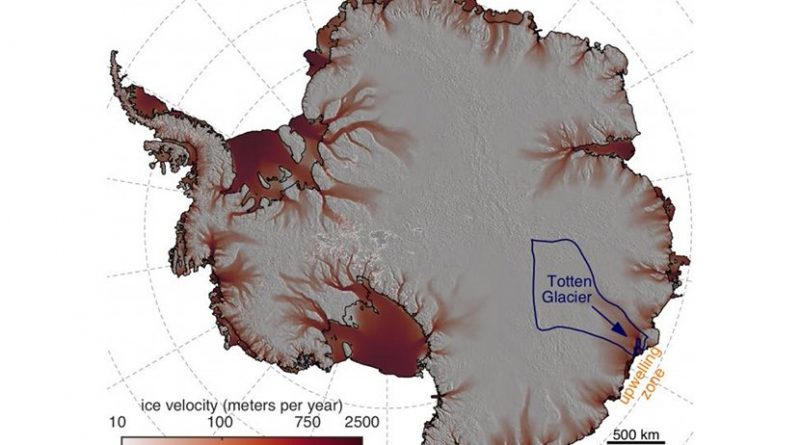 Totten Glacier, the largest glacier in East Antarctica, is being melted from below by warm water that reaches the ice when winds over the ocean are strong — a cause for concern because the glacier holds more than 11 feet of sea level rise and acts as a plug that helps lock in the ice of the East Antarctic Ice Sheet.

Research led by The University of Texas at Austin has found that wind is responsible for bringing warm water to Totten’s underbelly, causing the glacier to melt from below. This finding helps answer the question of what causes Totten to speed up some years and slow down in others. Climate change is expected to increase the intensity of winds over the Southern Ocean throughout the next century, and the new findings show that Totten Glacier will probably respond to the changing winds.

“Totten has been called the sleeping giant because it’s huge and has been seen as insensitive to changes in its environment,” said lead author Chad Greene, a Ph.D. candidate at the University of Texas Institute for Geophysics (UTIG). “But we’ve shown that if Totten is asleep, it’s certainly not in a coma — we’re seeing signs of responsiveness, and it might just take the wind blowing to wake it up.”

The study was published Nov. 1 in the journal Science Advances. UTIG is a research unit of the UT Jackson School of Geosciences.

The team of researchers found that the glacier speeds up its flow toward the sea when winds over Antarctica’s Southern Ocean are strong and pull warm water up from the deep ocean onto the continental shelf in a process called upwelling. Once the warm water reaches the coast, it circulates under the floating portion of the glacier via submarine canyons, melting the edge of the ice sheet from below. When a glacier melts, it thins, weakens and speeds up, letting more landlocked ice drain into the ocean, causing sea levels to rise.

Wind strength varies from year to year, but greenhouse gases, such as CO2, act like an amplifier to Antarctic coastal winds, boosting their intensity and allowing them to bring up warm water from the depths more frequently. This interplay between climate and wind can lead to sea level rise simply by moving water from one place in the ocean to another, said Greene — no warming of the air, or of ocean temperatures required.

Upwelling occurs when wind displaces surface water, allowing deeper and warmer water to rise up to replace it.

“It’s like when you blow across a hot bowl of soup and little bits of noodles from the bottom begin to swirl around and rise to the top,” said Greene.

Upwelling can have big impacts around Antarctica, where the deep waters tend to be the warmest (about 5 to 7 degrees Fahrenheit above freezing). The ocean surface is typically near freezing because it’s constantly exposed to subzero air temperatures. So when wind pulls warm water up from down deep, the temperature difference experienced at the interface of the water and ice can effectively submerse the glacier in a hot bath, with some areas experiencing more than a 10-fold increase in melt rate.

The team’s study complements an earlier study led by Jason Roberts, a glaciologist with the Australian Antarctic Division at the Antarctic Climate & Ecosystems Cooperative Research Center. Roberts found that when warm water melts Totten from below, it causes the base of the glacier that’s usually grounded on the seafloor to float. This unpinning of the glacier can cause the glacier’s flow to accelerate, adding more ice into the ocean and contributing to sea level rise.

“The remaining question was, why do the canyons beneath Totten get flushed with warm water some years and cold water other years?” said Roberts.

The new study helps answer that question by explaining how wind drives warm water beneath the glacier. By combining satellite images of the ice sheet and wind stress data from observations and computer modeling, Greene and his collaborators were able to study the chain of events that brings the warm water to Totten. That includes modeling the wind-induced upwelling at the edge of the Antarctic continental shelf, the flow of the water through submarine canyons on the continental shelf, and the water reaching Totten that causes melt and acceleration.

During the next century, winds are expected to intensify and migrate closer to the East Antarctic coast as a result of increased atmospheric greenhouse gas. This study suggests that as winds over the Southern Ocean intensify, so will Totten Glacier’s contribution to global sea level rise.

“Ice sheet sensitivity to wind forcing has been hypothesized for a long time, but it takes decades of observation to show unequivocal cause and effect,” said Donald Blankenship, a senior researcher at UTIG who contributed to this study and Roberts’ study. “Now we’re at the point where we can explicitly show the links between what happens in the atmosphere, what happens in the ocean, and what happens to the Antarctic Ice Sheet.”