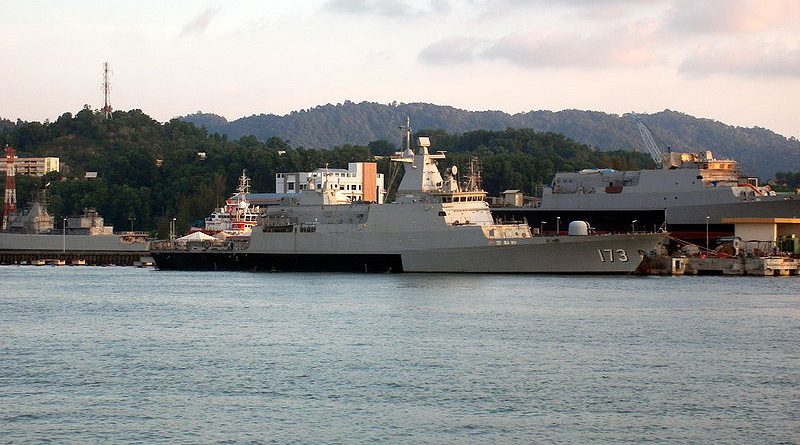 (FPRI) — Considering that the South China Sea divides Malaysia into two halves and that its neighbors—most notably the People’s Republic of China—have not only claimed part or all of those waters but also increased their naval and coast guard presence there, one could have expected the Malaysian government to have devoted more resources to its navy. But it has not. Instead, the Malaysian parliament cut its navy’s budget, in real terms, for four out of the last five years. Not surprisingly, doing more with less has worn down the navy’s ships, whose average age now exceeds 30 years.

Hoping to recapitalize its aging fleet, the Royal Malaysian Navy laid out its 15-to-5 Transformation Program in 2015. The program planned to cut the number of ship classes in Malaysia’s fleet from 15 to five to substantially reduce its operations and maintenance costs. Doing so would free up resources that the navy could use to purchase new ships without the need for major supplemental funding. But the program has been slow to roll out. In the meantime, the navy continues to be stretched thin, even as new maritime challenges have arisen.

Possibly the biggest conventional challenges facing the Malaysian navy are China’s growing number of naval and coast guard vessels and its newly built military installations in the South China Sea. Together, they have enabled China to maintain a near continuous presence within Malaysia’s exclusive economic zone, particularly near South Luconia Shoals, for almost half a decade. Between 2016 and 2019, Chinese navy and coast guard vessels intruded into Malaysian waters 89 times, according to Kuala Lumpur.

Even so, Malaysian leaders have typically chosen to put their faith in a yet-to-be-completed South China Sea code of conduct and play down such Chinese encroachments. Indeed, Malaysia’s former prime minister, Najib Razak, even granted China’s navy port access rights at Kota Kinabalu, near the Spratly archipelago (and South Luconia Shoals) in 2015. He instead focused the Malaysian military on countering militants from the southern Philippines. Malaysia’s first defense white paper, published in December 2019, continued to rank other security dangers ahead of the one posed by China. Consequently, the Malaysian navy has focused its efforts on improving its amphibious and coastal combat capabilities rather than developing those needed to face China on the high seas.

The sharp decline in oil prices over 2014 and 2015 further complicated matters for the Malaysian navy. As the price of oil dropped so too did the dividends from Malaysia’s state-owned energy company, Petronas, which provides the Malaysian government with about 45 percent of its revenues. With ever tighter budgets, major military procurement programs were cut back, delayed, or put on hold. They included programs that were to procure attack helicopters for Malaysia’s army and fighter and airborne early warning aircraft for its air force. The navy was no different. Budgetary constraints were cited as one of the key factors that led Najib to source the Malaysian navy’s new class of littoral mission ships from a shipbuilder in China—the very country whose naval forces those ships might one day be called upon to counter.

But even during times of budgetary plenty, Malaysian leaders have apparently thought it better to use military procurement as a way to improve Malaysia’s diplomatic ties than to prepare its armed forces for future battle. As a result, one defense industry observer characterized the Malaysian government’s approach to military procurement as often a “rationalized decision rather than rational decision-making.”

Thus, over the decades, the Malaysian navy collected a hodgepodge of ships from no fewer than seven countries, which included China, France, Germany, Italy, Sweden, the United Kingdom, and itself. That has made fleet operations and maintenance difficult, due to the need for specialized skills and separate supply chains to operate different ships. The latter could wind up hindering naval operations in wartime, especially if the armaments and spares for particular ships are only stored at their homeports. For example, ships based on Peninsular Malaysia responding to a crisis off Borneo would be forced to sail back and forth across the South China Sea every time they needed to rearm or refit, despite the availability of Malaysian naval bases nearby.

Another big problem facing the Malaysian navy is the growing obsolescence of its warships. That much is clear from their commissioning dates. Of Malaysia’s 34 naval combatants at the beginning of 2020, two-thirds were commissioned over three decades ago. Among the newer third, two were commissioned in the 1990s, six in the 2000s, and only two in 2010. The 15-to-5 Transformation Program was conceived to address both problems. By slimming down the number of ship classes from 15 to five, Malaysia’s navy leaders argued that they could greatly reduce their service’s annual operations and maintenance costs and, with those savings, fund the acquisition of new and more capable warships. And, with fewer classes, the navy could more easily stock armaments and spares at multiple bases.

The transformation program was supposed to have begun bearing fruit in 2020 with the delivery of at least three or four new warships. But progress has been slower than expected. The Malaysian shipbuilder of the first batch of six littoral combat ships fell behind schedule. By August, construction on only one littoral combat ship had passed the halfway mark. Another four ships were not even that far. The delays have prompted the Malaysian government to contemplate terminating its contract with the shipbuilder (which, ironically, is owned by the government). The Chinese shipbuilder for the first four littoral mission ships fared better, delivering at least one ship during the year. Still, Kuala Lumpur has reconsidered both the contractor for and the design of the rest of its littoral mission ships, possibly switching to a different warship class that is similar to one already built for Malaysia’s coast guard.

Conceptually, the Malaysian navy’s 15-to-5 Transformation Program makes both operational and financial sense. And after Mahathir Mohamad’s victory in Malaysia’s 2018 general election on a platform that was, at least in part, concerned about China, legislative support for the navy’s program looked likely. That appeared to be confirmed a year later when Mahathir’s foreign minister, Saifuddin Abdullah, intimated that Malaysia needed a stronger navy. In response to a parliamentary question, he stated that Malaysia should begin to prepare for possible conflict in the South China Sea and lamented that the country’s navy warships were often less capable than the coast guard vessels from China. Hence, he highlighted the need for Malaysia to “upgrade” its naval and maritime enforcement assets.

But pressure to cut defense spending may be rising once again. With the COVID-19 pandemic depressing oil prices and Chinese harassment slowing new oil exploration in the South China Sea, royalties from Petronas are expected to fall. That bodes ill for both government coffers and the navy. Moreover, the sudden change in Malaysia’s government in March 2020 added even more uncertainty. The new government, now led by Prime Minister Muhyiddin Yassin, has yet to reveal its plans for the navy. In fact, it has not disclosed much about any of its budgetary priorities, delaying the release of the 12th Malaysia Plan, the country’s development roadmap for 2021-2025, until early 2021.

Nevertheless, even if the navy’s transformation program is completed (and completed on time), the forces that it envisions might not be enough to keep pace with those China is building in the South China Sea. Eventually, Malaysia will need more warships and, perhaps, even ground-launched anti-ship cruise missiles if it is to create a credible deterrent in the region. That was evident in March 2020 when China sent a flotilla of several coast guard and maritime militia vessels into Malaysia’s exclusive economic zone. The flotilla took little notice of the Malaysian navy’s patrol boat and support ship that were dispatched to protect the area. If Malaysia truly wants to maintain control over its waters, then it can no longer afford to be complacent about its external defense forces. Malaysia will have to treat them, particularly its navy, as genuine priorities.