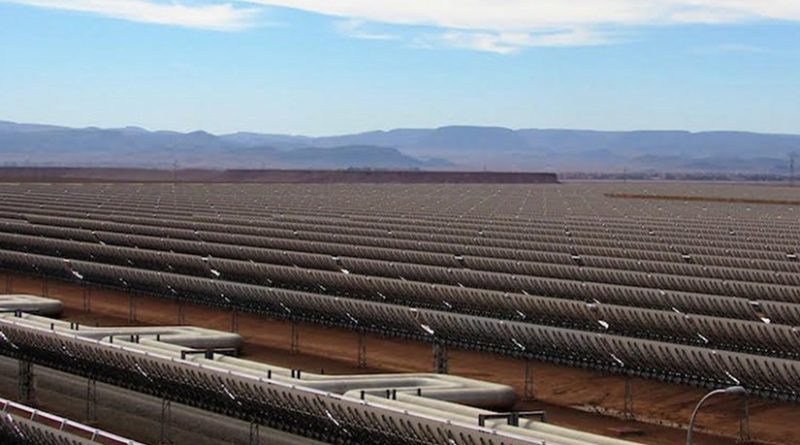 The ambitious Moroccan plan for harnessing heat coming from the sun in the Sahara desert and turning it into electricity has drawn international attention, also during the United Nations Climate Change Conference (COP22), held in Marrakesh, between November 7-18.

Two hundred kilometres Northeast drive from the COP22 venue lies the 450 hectares Noor solar complex. When it starts fully operating in 2018, it will power over one million households and curb 760,000 tons per year of greenhouse gas emissions.

The whole Moroccan capital city Rabat fits in this power station said to be the world’s largest solar plant compared to the size of the European city of Barcelona. Noor is located at the desert town of Ouarzazate surrounded by the Atlas mountain range and its Berber villages. Named as the gate to the desert, Ouarzazate has also become the gate to tapping the solar energy.

“Since the world became aware in the Earth Summit Rio 92 (United Nations Conference on Environment and Development) of the urgent need to address climate change, the Kingdom of Morocco has resolutely sought to ensure that its proactive policy of sustainable development and environmental protection is in line with the international community’s global effort,” said the Moroccan King Mohammed VI, at the COP21 in Paris when the world leaders agreed on a deal to curb greenhouse gas emissions and avoid the planet’s warming by the end of the century.

Morocco receives about 3,000 hours of sunlight per year, being the Sahara desert a perfect place to harness the sun’s rays. This North African country enjoys no fossil fuel reserves and it relies almost exclusively on imports to meet its domestic requirements.

In line with the Twenty-Second Conference of Parties in Marrakech and as part of the responsibility of proving its green credentials with climate commitments, the Noor complex is part of Morocco’s strategy to produce 42% of its power mix generated from renewable sources by 2020 – a goal that has been applauded by the UN.

The country announced a US$13 billion plan for expanding wind, solar and hydroelectric power generation to increase its share of renewables in less than a decade to come.

Currently, the $9 billion Noor facilities generate 160 megawatts (MW). When the next two phases are completed and the solar turbines start running to its full potential, it is expected that Noor will generate more than 500MW. The next phases – Noor 2 and Noor 3 – are expected to begin their operations in 2017 and 2018,.

To finance the mega structure, Morocco has secured loans of US$519 million from the World Bank, 654 million euros from German bank KFW and partly from the African Development Bank, the European Commission and European Investment Bank.

The project is being developed by a consortium of the Moroccan Agency for Solar Energy (MASEN) together with ACWA Power – a developer, investor and operator owned by eight Saudi conglomerates and head-quartered in Saudi Arabia.

The company is currently operating in 11 countries in the Middle East and North Africa (MENA), Southern Africa and South East Asia. The MASEN sells the electricity generated in Noor to the National Office for Electricity and Water.

“Morocco is making the best out of the resource it has, it has got sun and capability to develop industrial capacity. At the end of the day, we want to deliver stable and reliable electricity with a fix price and continuous supply for the next 25 years. It is fundamental for ground development and social wellbeing,” said Paddy Padmanathan, Chief Executive Officer of ACWA Power.

The power mega complex uses a technology called Concentrated Solar Power (CSP). Its costs are higher because of the use of lenses and mirrors rather than the broadly known photovoltaic panels that have usually lower installation costs. On the other hand, the CSP technology allows to store around eight hours of energy. That means saving energy to use at nights and in cloudy days.

“We take the heat of the sun and run the steam turbine. We don’t need to use the electricity immediately because we are able to store it efficiently. That is the big advantage of the CSP system, it is much more versatile,” explained the civil engineer who has been the ACWA’s CEO since 2006.

Padmanathan is of the view that setting up renewable plants in remote areas where there are usually places that tend to have the poorer standards of living conditions is a way of “revitalizing remote regions on the back of investments like this”.

“Morocco has demonstrated that you can deploy this type of project with scale. It is replicable if you use a transparent procurement process”, he told IDN.

Asked if it can inspire other developing countries, Padmanathan said countries like Jordan, South Africa, Botswana, Namibia have shown interest in the Noor plant. “We also received visits from Peru and Chile”, he recalled. Those two countries share the Atacama desert in South America with huge potential of harnessing the sunlight for power generation.