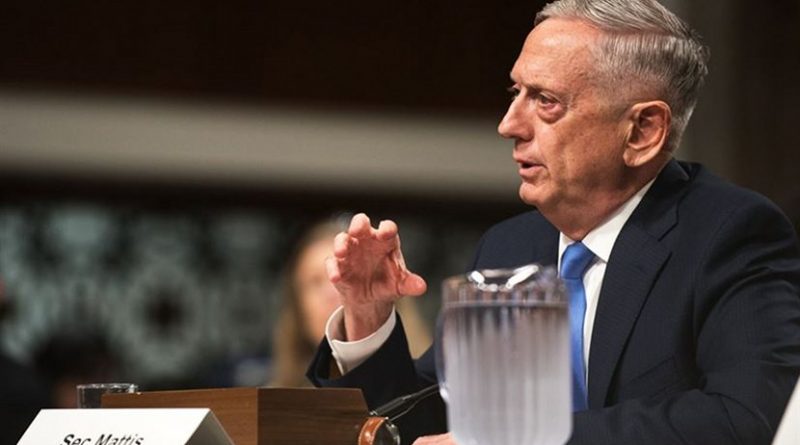 The world is awash in change, but the new National Security Strategy serves as a rock of stability for the nation and like-minded countries, Defense Secretary James N. Mattis said at the Reagan National Defense Forum in California.

The secretary spoke about the new strategy and why it is important during his presentation at the annual forum, held at the Ronald Reagan Library and Museum.

“Go back in time two years: we were fighting overseas yet automatic spending caps had resulted in the smallest U.S. military since 1940,” he said. “We had munitions shortages, aircraft that were unable to fly, ships to often unable to sail; an aging nuclear deterrent and an eroding technological edge over our adversaries in an era of renewed great power competition.”

He noted the situation was much like what President Ronald Reagan faced when he took office in 1981.

A year ago, President Donald J. Trump released the National Defense Strategy. The document is meant to map out the U.S. military from a time of strategic atrophy, Mattis said. The document was also meant to “expand the competitive space with our adversaries.”

The strategy focuses on three lines of effort: improving lethality, strengthening and expanding alliances, and reforming the Defense Department to emphasize performance, affordability, and accountability.

Improving lethality is a hot button item for the secretary. “We have put America’s adversaries on notice: work with … Secretary of State [Mike] Pompeo’s diplomats, for if the U.S. military is called to the fore, it will be your longest and your worst day,” he said. “We are engaging in long-overdue recapitalization of our nuclear deterrent to keep it safe and secure, and we are recognizing the stability it has brought over sixty years, we are investing to keep our triad credible, ensuring as President Reagan stated in his 1984 State of the Union, ‘a nuclear war cannot be won and must never be fought.’”

At the same time, the government is dealing with Russian President Vladimir Putin’s duplicitous violation of the Intermediate Range Nuclear Force Treaty. The U.S. is in full compliance with its obligations under the treaty today. There are no new U.S. missiles in Europe. But Russia has emplaced missiles. “We will re-energize our arms control efforts, but the onus is on Russia,” Mattis said. “This is highlighted by Russia’s brazen contempt and dismissal of their 2003 agreement with Ukraine that allowed both Russian and Ukrainian ships free passage through the Kerch Strait, an agreement brazenly violated last weekend.”

Lethality reaches into infantry units as well. “Our Close Combat Lethality Task Force is integrating human and technological factors to ensure our close-combat units never enter a fair fight,” he said. “I bring this up because somewhere around 85 percent of our casualties since 1945 have been taken in our close-combat infantry units. They deserve every advantage we can give them.”

From increased production of critical munitions, to procuring advanced fighter jets, to increasing our fleet size, the U.S. military is becoming more lethal while supporting a stable, efficient industrial base.

Alliances are key to U.S. success, movement and staying power. “We pursue strengthening our alliances, because history is clear: nations with allies thrive,” he said. “America’s alliances are a durable, asymmetric advantage no competitor can match. Unlike other nations, we don’t buy friends – we earn them. We do not seek vassal states; we want empowered partners who invest in their own sovereignty and determine their own destiny.”

In Europe, NATO allies represent half the Earth’s economic and military might. “Thanks to President Trump’s unrelenting call, in 2017, allies boosted defense budgets by a combined 5.2 percent – the biggest increase in a quarter century,” Mattis said. “Combined, our twenty-eight NATO allies have increased spending by $41 billion in the last two years, and it is now clear to every observer, including Moscow that NATO is strong and growing stronger. It is adapting to be fit for its time.”

In the Indo-Pacific region, the United States is strengthening decades-old alliances while building new partnerships. The visit of the Navy’s aircraft carrier USS Carl Vinson to Vietnam earlier this year highlights the progress. The United States is also working ever more closely with India, the secretary said.

“In Korea, our diplomats speak from a position of unquestioned strength as they endeavor to achieve the complete verified denuclearization of North Korea,” he said. In the Middle East, Mattis said, the coalition to defeat the Islamic State of Iraq and Syria – which consists of 79 nations and international organizations – has confined ISIS to less than 2 percent of its geographic caliphate.

“In Afghanistan, President Trump’s decisions have changed the game,” he continued. “For the first time in seventeen years the U.N. believes we have hope for peace. Afghan troops are in the lead in the fighting and taking hard casualties. But NATO and the international community are stepping up their commitments. The Taliban may now be open for the first time for sincere talks about peace. We’ll see.”

Alliances work in our own hemisphere as well and Mattis touted progress made to increase democratization. “From Ottawa to Mexico City to Buenos Aires to Santiago, we see increasing democratization and, despite economic headwinds and crime, opportunity for the Americas to become a region of increasing political and economic stability,” he said.

The third line of effort is to be good stewards of taxpayer dollars. “Last month, we completed our first ever consolidated financial audit in DOD history,” Mattis said. “It covers $2.7 trillion in assets. We conducted it to find problems. I intended to find problems. I would have been disappointed had we not. We embrace the findings. We are taking corrective action on a host of revealed issues. We intend to uphold the trust of the American taxpayers and the Congress.”

DOD is also pushing technology and innovation. “While much remains to be done, we are reclaiming our mantle of technological enterprise and signaling our determination to achieve more here, in space, in hypersonics and artificial intelligence,” he said. “The work goes on – in changed tactics, heightened incorporation of space and cyber operations, training and readiness, equipment and maintenance.

“America’s warriors rehearse their grim game from the firing range to the flight deck, from the sea floor to outer space.”

The erosion of America’s competitive advantage has been halted, but the country is not out of the woods yet. “Without sustained, predictable funding, the gains we’ve made will swiftly fade and our investments will never realize their full potential,” he said. “I share a responsibility with Congress: that not just the next secretary of defense, but the secretary after next, has the military advantages necessary to deter conflict or win if we must fight.”