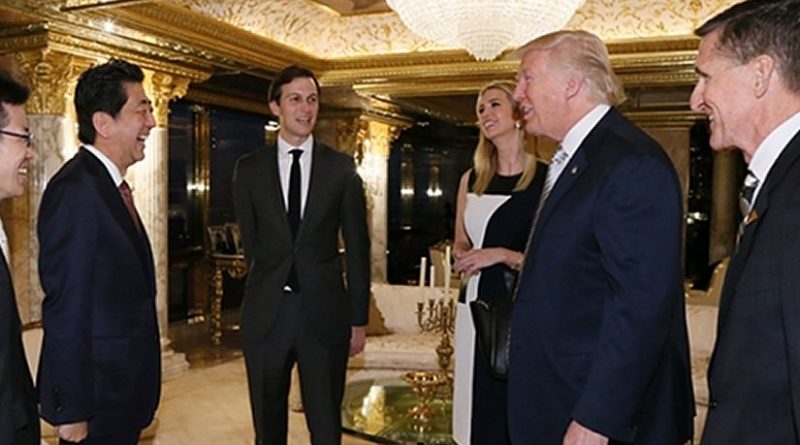 It is expected that the US-Japan bilateral relations are likely to undergo a significant shift with the election of Donald Trump as the next President of the United States. Trump’s campaign rhetoric had been quite alarming for some in Tokyo and Washington given his assertion that the United States should not be burdened with the responsibility of Japan’s security needs. However, President-elect Trump’s policies could potentially turn out to be a blessing in disguise for the reformist Abe administration.

During the months leading up to the Presidential elections, Donald Trump had criticized Japan on grounds of insufficient financial contribution in return for US military protection. He had even expressed his opinion in favour of Japan acquiring nuclear weapons. These views challenged the fundamentals of the longstanding security partnership between Japan and the US. It was the fear of deteriorating relations with the US that prompted Japanese Prime Minister Shinzo Abe to become the first foreign leader to visit Trump after the elections. However, the Abe administration can actually benefit from a Trump White House if it plays its cards right. Abe could utilise this opportunity to push for greater military self-sufficiency and a more prominent regional role for Japan. Perhaps this is the underlying reason for Abe’s efforts to engage closely with Trump from the very beginning.

With Japan declaring itself a ‘peace state’ in the aftermath of World War II, the US-Japan security alliance was established. The treaty signed between the two countries grants US the right to military bases on Japanese soil. In exchange, Japan is to be defended by the US in case of an attack. This arrangement furthered the ‘Yoshida Doctrine’, which was the grand strategy laid out for modern Japan by the then-Prime Minister Shigeru Yoshida. This doctrine saw Japan relying on the US for its security so that it could focus on rebuilding its economy. The US-Japan security partnership has lasted longer than any alliance forged between two major powers in recent history.

This very foundation of Japan-US bilateral relations was challenged by President-elect Donald Trump during his election campaign. He expressed dissatisfaction over the fact that the US has to deploy full force to protect Japan during a crisis, but Japan does not have any such obligation. He went on to claim that “they don’t pay anything near what it costs” to maintain US security forces. He also said that it might be necessary for the US to walk away from the treaty if Japan did not pull its weight in terms of monetary contributions.

Trump’s statements had raised eyebrows in the Japanese society – but Prime Minister Abe was quick to respond to the changed political reality. He directly phoned the newly elected President on November 9. On November 17, Abe became the first foreign leader to meet Trump. The unofficial talk between Abe and Trump in New York reportedly went well, with the former reflecting on aspirations to build “a trustful relationship”.

Although there are still uncertainties regarding Trump’s security policy towards Japan, it is likely that the President-elect would seek to change certain aspects of this alliance. He might ask Japan to spend more for maintaining US defence forces on its territory, or he might decide to withdraw those forces gradually, thereby delegating more military responsibility to this long-term ally. This development would potentially play out in favour of the Abe administration which aims to revise Japan’s pacifist military policy. Abe seeks to provide the country with greater strategic autonomy. Possessing a fully functional, independent army is a necessary precondition to transform Japan into a “normal” state. Abe has identified that Japan’s asymmetrical security relation with the US is indeed restricting Japan from fulfilling its foreign policy goals. If Trump urges Japan to assume an increased military role, it would provide a strong basis for Abe to move away from excessive dependence on US security guarantees without facing much backlash at home. In a society like Japan, where norms and traditions are held in high regard, such a transformation cannot be brought about without external pressure. The Trump presidency has provided Japan a rare opportunity to rearrange the contours of the US-Japan security relationship and to embark on a path of equal partnership.

Geopolitics is the second aspect in which a Trump White House might prove beneficial for Japan. The two countries could collaborate more overtly to balance against the ever-expanding influence of China in the region. A security adviser to Trump, has spoken about the possibility of the Trump administration seeking Japan’s help in countering the threat of a rising China. The adviser expressed Trump’s desire to engage actively in Asia. Abe is “a uniquely placed figure to offer leadership in the alliance” in this regard. He also sought to dismiss any “unfounded” perturbation that the Abe administration might have regarding the future of US-Japan alliance.

Engaging with the US to tackle China, coupled with increased military self-reliance, would provide an opportunity for Japan to show its true potential as a regional and global power. The pacifist constitution currently prevents Japan from performing a strategic role commensurate to its economic strength. Certain changes stimulated by the Trump administration could enhance Japan’s profile in the region.

A rearranged Japan-US partnership would prove beneficial for India as well. India shares strong bilateral relations with both Japan and the United States. The rise of China is a cause of concern for all three powers. Signs of progress have been visible in the India-Japan-US relationship, with efforts being made to strengthen all three legs of this triangle. In September 2015, the US Secretary of State John Kerry hosted the foreign ministers of India and Japan for the first ever trilateral ministerial meeting, underscoring an official elevation of the existing trilateral dialogue between these three major actors of the Indo-Pacific region.

The 2016 Malabar exercise was also a step in this direction. This trilateral naval exercise included both ashore and at-sea phases. The three nations jointly practiced anti-submarine warfare, air-defence and search-and-rescue drills. China is steadily militarizing the South China Sea, where it is engaged in territorial disputes with its neighbours. China’s aggressive stance has been demonstrated by its construction of artificial islands consisting of runways suitable for handling military aircraft in the region. In this strategic milieu, it becomes necessary for India, Japan and the US to collaborate ever more closely and ensure freedom of navigation in waters that carry one-third of the global trade.

The United States is keen to encourage India’s active participation in maintaining regional stability to balance Chinese ascendance. Japan also shares a “strategic partnership” with India. India’s prominent role is likely to continue under the Trump administration. Donald Trump has adopted a tough attitude towards China from the very beginning, declaring in 2011 that “despite all the happy talk in Washington, the Chinese leaders are not our friends”. Throughout his campaign, Trump labelled China as an adversary of the United States and even after his election he has continued to take a hard-line towards China.

A renewed focus on the US-Japan security alliance has the potential for greater burden sharing and convergence among the major players in the Indo-Pacific. A subdued military role has prevented Japan from being a strong strategic partner of the United States. But a policy shift by the Trump administration vis-a-vis Japan might prove to be a step in the right direction if it manages to bring a semblance of balance in the Asian security structure.